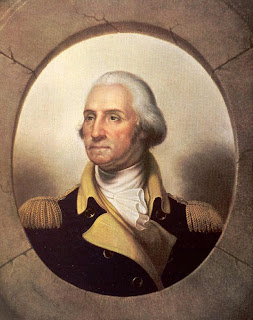 He had no formal education. A big brother that got all the property. Leaving him to dream of military glory...as a British officer. That career path didn't turn out so well.

His initial military career contained at least one large failure and at least one outright miracle. But, oh how he could ride a horse. And how ambitious he was. He swore and fought, loved and lost. Flirted. Courted. Won the hand of a superior woman. Loved her children as his own. In a time when blood REALLY mattered.

Then--a chance for tremendous glory. Or failure and disgrace. No middle ground. Fought and lost and slipped away. Fought again. A surprise on Christmas Day. Held his army by personality and communal experience. When there was no money for food or uniforms. Alone in his tent, by candlelight, he sat and wrote of loneliness, and despair.

He survived the scourge of politicians and intrigue. Enjoyed the blessing of a few great comrades in arms. Henry. Nathaniel. The Baron. The Marquis. Light Horse. Even Benedict. For a time. He finished the race. Won the day. "The world turned upside down".

Afterward, the temptation of ultimate power. A monarchy declined. Stood up for his men and his infant nation. Went to Fraunces' and prevented revolt with one timeless remark. Took the hits. Suffered the loss of privacy. Even ridicule. Ridicule! After all he had given. Of his manners. His deliberate speaking style. And the teeth. Always the damn teeth. Survived more intrigue and political slime.

Finished the job. Walked away. Into our collective memory. Where he remains. Unique. Indispensable.
Posted by M.Lane at 5:00 AM

I am a huge George Fan and love touring his house and watching how he was portrayed in "The John Adams" HBO mini series.

PPPG, I was amazed at Mt. Vernon when I realized coming down the main staircase with my hand on the bannister that HE TOUCHED THIS.

I also thought the Adams series did a good job with GW.