Late night, Kansas City. Last week, I was strolling through the Drum Room bar at the President Hotel one evening en route to dinner. My progress was arrested by fine music being produced by a jazz trio set up in a corner of the room. I knew as soon as I saw them that they were my sort of combo. Experienced players with some years of service. In tuxedos. With a single, fairly worn, band stand bearing the leader's name. Skip Hawkins. Playing with a keyboardist and a base. Mr. Hawkins played flute, sax AND clarinet. Very well.
Sometimes, great music can alter your entire plan. Especially when it is not expected. I had seen nothing to indicate that there would be live music in the Drum Room that night. I just sort of walked out in front of it, as it were. But the sound was so good, it caused me to do something I rarely do. I ate dinner at the bar and sat there the rest of the evening. Typical for a bar show, there was at times a pretty full house and at times nobody there but me. I think the combo played five sets and I was the audience for two of them. During one of those two sets, I sipped my martini and wondered...who is more of a romantic, the musicians playing so well to an empty room, or the one guy at the bar listening all night?
I never did reach a conclusion. The evening was summed up by another patron of the bar who said to his date at one point "This is great music. These guys don't just PLAY music, they MAKE music." A rather valid distinction it seemed to me. Of people plying a craft. In a room at times occupied only by an itinerant storyteller. As the night grew longer and more indigo. Illuminated by the Drum Room sign just above the corner window. 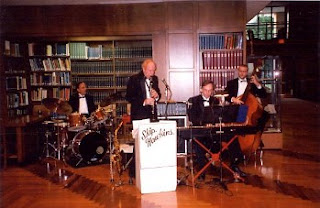 Great story! One night in Kansas City my wife and I were searching for Jazz and were unable to find any! Next time, I will check out the Drum Room.

For the record, I think the person listening to the Jazz alone is the more romantic.

NM, thanks for the visit and comment! I have another post on KC called "Kansas City Here I Come" that has some other places in it. The next time you go, let me know and I'll give you a list of jazz joints.