An Evening In Old Rangoon 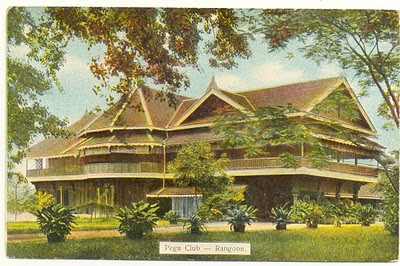 Alexandra was always amazing but especially so in the summer. When the Burmese steam settled thickly over the land. For months on end. After six months he had given up trying to keep his clothes dry during the day and surrendered to a semi-perpetual state of sartorial dampness. Alexandra, however, was one of those women whose elegance included a personal thermostat. She rarely "glowed" as the ladies would say. And when she did, it was only when, for one reason or another, she was most emotionally aroused. Even then, her cheeks would flush to pale pink and her perfect skin would allow a solitary bead of moisture to move slowly down her neck.
That evening he was to be formally presented as the company's new managing director. The London office spared no expense. Double the usual allotment of bottles of Bollinger champagne in their straw filled cases had arrived at the provisions door of the Pegu Club. The club president had allowed them the use of largest suite of rooms for the night.
He put on black linen trousers and what passed for a starched shirt in Rangoon, adjusted his tie, and slipped on his dinner jacket. As he walked into the large alcove off the bedroom he saw her in the mirror of the dressing table as she applied light powder to her skin. As always, he was taken aback at the sight of her, tonight in a pale green gown of raw silk that fell gently off her shoulders.
They made their way to the bar for cocktails. The ladies and gentlemen assembled there applauded enthusiastically when he and Alexandra entered the room. The Pegu Club had its own cocktail, refined for decades. Gin. Bitters. Curacao. Lime. Just the combination for sub-tropical life "out East" as they said in London. After a round or two of drinks, the party was seated for dinner. Fish steamed with coconut in banana leaves. Mango fried rice. Tiger prawns in mustard sauce. Fresh coconut ice cream with a drizzle of melted bitter chocolate. Bottles and bottles of iced Bollinger.
When the last dish was cleared, it was time for his short speech of thanks. Then, he lifted his glass of champagne and, looking only to her, he said
"Thank you for your love. Your constant support. And your elegant, enduring strength."
Her emerald eyes sparkled as she gave the slightest nod of her head in reply.
Later, as they made their way up the stairs to the President's Suite, he noticed a bead of moisture making its way slowly down the center of her back...

Imbibery and Culinary Note:
The Pegu Club Cocktail is a timeless and perfect drink for the deep summer months. The traditional recipe is ...
Added to a mixing glass full of ice:
1 dash of Angostura bitters
1 dash of Orange bitters
1 teaspoon of fresh Lime juice
1 large shot of Curacao
2 large shots of dry Gin

Stir. Pour into a cold cocktail glass and serve with a slice of lime.

If you live in the hinterlands as I do, where nobody has even heard of Orange Bitters, you find yourself in a dilemma. Mrs. ML [the Irish Redhead] came up with a master-stroke, substituting Orange Curacao for the Orange Bitters. Rendering the recipe... 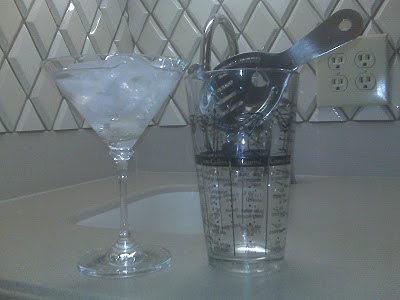 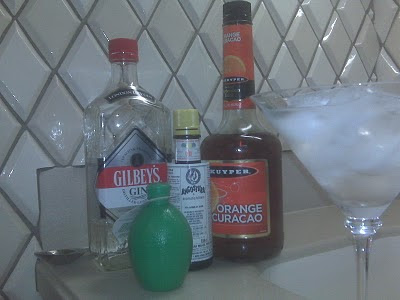 And the finished product... 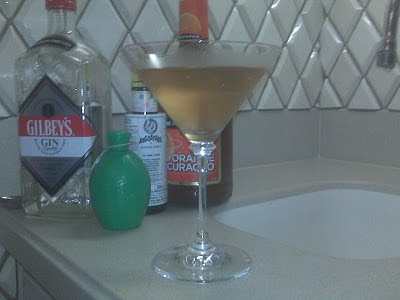 If you are a fan of the Trader Vic's cookbook, as I am, then you may wish to add a plate of Crab Rangoon appetizers. Won ton wrappers filled with creme cheese, crab, and scallions, then fried quickly at no more, and no less, than 370 degrees.... 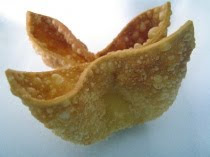 Not an authentic Burmese dish, perhaps, but an indulgent and luxurious one in any event. A perfect compliment to your installment as Managing Director. Enjoy.

Oh c'mon...fresh lime juice please...not that horrid little plastic lime squeeze vessel...I am shocked.
Great piece of writing...reminded me of the movie "Elephant Walk" for some reason. Ever seen it?
The drink does sound good and I will mix one up this weekend when I return from the lacrosse wars in Annapolis.

MLS, thanks! I agree about the lime juice but at the time I took the photo I had used all the limes making the drink so I had to use the plastic lime to make the point. Good luck with LAX...

Last night was just that sort of night. We tried several of Mrs. L's variations to great effect.

I will treasure her contribution forever.

BDV and Barbara, thank you very much. I'll try to keep thinking of something to jot down...

Toad this may be the greatest comment ever! I passed it along to the IR and she was delighted. As am I.