From The Epic Valet Box: The Timex Dress Watch 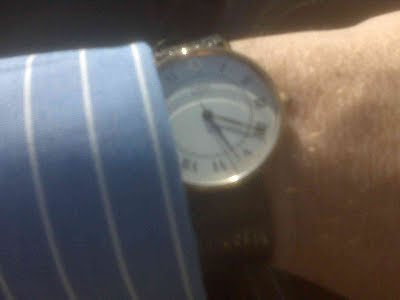 Late night. 1982. A Walgreens store in rural southwest Virginia. A boy from the Wisconsin woods, armed only with a better education than he probably deserved, is preparing to head out on his first paid out of town interview trip. And he has no watch. Not one good enough to wear into the offices of an August Law Firm.

He has insufficient funds to go to a jewelry store to look for a watch but he has seen a display case of Timex watches when out buying tooth paste, shaving cream, the usual things. So, when he realizes at midnight that he has no dress watch to go with his one navy blue suit and white shirt from Lands End he panics. And heads to the only watch display he can remember. Up there in the mountains where he lives.

Most of the watches were pretty awful. But there was this one watch that seemed singular. Lonely among its compatriots. Wafer thin. Plated with several hefty "microns" of real gold. Roman numerals. Black synthetic carbochon on the stem. It seemed to be begging the boy to arrange its escape from captivity. To give it one shot at peeking out from under the cuff of a nice shirt. The boy knew it had to be. The purchase was made, the escape from a rotating plastic display accomplished. For the grand total of twenty-four bucks.

The interview trip was a monumental disaster. Seemingly, the boy was considered too much of an artist for an August Law Firm. But the watch remained. Thirty years later, the boy, now impersonating a man, found it in the back of his valet box. Battery dead as a doornail. The "microns" still glowing in the sultry way of a real gold case. A few dollars spent and it is back in business. Except now the boy can afford to give it the alligator band that it so richly deserves. Because, you see, the boy and the watch have been through the professional wars together. From way back. Before he married a woman that would give him a vintage Rolex, just for fun. It still gets compliments. And, in an odd way, every time the boy puts this watch on, it transports him for a moment or two to to a time when everything was bright and shiny. When opportunity flashed on every horizon. When victory and defeat were just abstract concepts.

It is good to keep things from our past times. To preserve them. And to let them preserve us as well.
Posted by M.Lane at 10:24 AM

Beautifully written. And I totally agree. Love when I come across things from my past. Especially first significant purchases. I really loved this- thank you for sharing.

What a wonderful story. It's good for the soul to find an old "friend" and reminisce. Thanks for sharing! xoxo

I have the exact same watch! What a kick to see it on someone else.

DC, I really love your youtube videos! Now when you walk into the Beverly Hilton bar and I'm having a martini I'll know its you!

Preppy, I do think that the reminiscences are what make the value of old things. Sort of like a time portal...

Michael, amazing! Do they still make them or is it a vintage one?

Exquisite! You could write for J. Peterman.

Are you from Wisconsin?

Please don't take the J Peterman comment as an insult. Your writing, of course, is longer and has more substance. It's just so darned good. I used to write ad copy, and fancy myself somewhat of a decent judge of such things.

Hi Mimi! Thanks for the visits and comments. I am very complimented by your comparison. Thank you! I'm from Vilas County.

This is truly a great read for me, thank you for the effort to publish this.

Skye, thanks for dropping by and for the comment!! I really appreciate it.