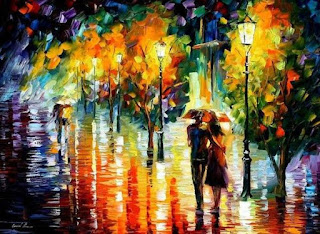 He hadn't meant to stay out so late. But in that part of town that is what you did.  All quiet little bars and cafes, it was made for that purpose. And he had nothing else to do.

After what happened a year ago, he had planned to move away.  To a place without romantic places. There were plenty of them around. His only goal the finding of a small room with one good window to look out of.  Where he could sit for the remaining time.

A season and a short street foiled his plan.  Before he could decide on the quintessentially unromantic town, autumnal chill slipped into the night air.  The leaves began their blazing turn. He realized he would never leave. So he stayed.  And he walked down that street again.

The drizzle didn't help.  He sat in an old bar drinking Calvados for quite a while listening to Kind of Blue playing in the background.  Then Lush Life came on and he had to go.  Stepping out into the cold misty rain even the brandy and his ancient Burberry trench coat could not completely push the chill away.  He lit a cigarette with a scarred gold lighter.  The initials, "ML" barely visible after all the years.

A young couple walked slowly by.  Leaning into each other to stay under their umbrella. Heads close, lost in an assumed future. A quiet giggle drifted toward him.  He watched them until they turned the corner. The street remained, lamplight twinkling in the rain like liquid holiday lights.

The image of the couple in his mind, he smiled and turned toward home. It would soon be Christmas. He needed to go buy a turkey.  A bottle or two of Margaux. And a few presents.
Posted by M.Lane at 10:17 PM

Ben thanks! It has been a moody kind of a year pally. Glad to see your comment.

I can recommend Bloomington, Illinois, as a solidly unromantic place. Monroe, Michigan, too!

Cashmere, you are killing me!!! Thanks for the visit and comment. Good to see your name around The Epic again.