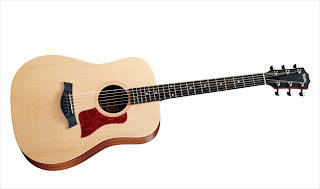 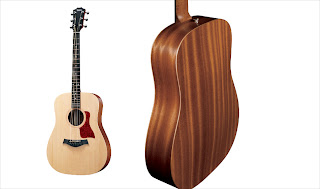 
I may not ever be able to play Little Martha. But you never know. Hendrix may come to me in a dream and show me how. I don't really care. The trip has already been more than worth the price of the ticket...

Photos courtesy of Taylor Guitars.
Posted by M.Lane at 5:31 AM

I played guitar as teenager. My father worked for Yamaha, so acquiring items was fairly easy. I never got the hang of it. My best friend at the time, who later went on to the Berkley School of Music in Boston, showed me best my trouble. We were playing together one day (ok, he was mostly playing, while I was enjoying his playing) and we made a recording of the song we were playing, Livin' After Midnight by Judas Priest. He played it back and told me, quite correctly, that I wasn't playing music, I was playing notes, which was precisely what I was doing. I continued playing for a while, but eventually sold my guitar to him, having never graduated past the notes stage. It did give me great appreciation for someone who is proficient at that instrument.

Hey! I play guitar. Have since I was your son's age probably. During my year abroad, when cash was tight, I wisely spent a windfall fifty pounds on a guitar and I was never bored when I couldn't afford to go out or travel.