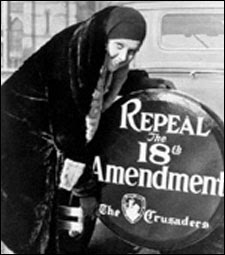 In 1917, over President Wilson's veto, Congress in its infinite wisdom passed one of the most idiotic laws in American history. Prohibition. Single handedly making American organized crime a world power. Sending American wine making into a tail spin. According to some, providing the eventual fuel [or lack thereof] for the Crash twelve years later. Certainly dampening the spirits of good, hard-working Americans throughout the land needing the solace or stimulation of their pubs, corner bars and nightclubs for sixteen years until the lunacy finally ended in 1933. One American Doughboy returning from World War I was noted to have said "I lost all my friends in Belleau Wood, was toasted all over France and England, then came back to my country and couldn't even buy a drink". Amazing. I am no economist (or economizer as my wife will attest) but I imagine that the repeal of prohibition did more to end the Depression than did the New Deal. At least as much. Of course, as any reader of The Epic will attest, I am a little biased on the issue of imbibery.
Some good things came of Prohibition though. One of the deans of American mixology in 1917 was Harry Craddock. Mr. Craddock presided over the bar at the Hoffman House Hotel in New York City. The Hoffman House was not only famous for its bar but for the twelve foot long mural "Nymphs and Satyr" by Adolphe William Bouguereau behind its bar. The mural disappeared into private hands only to reappear at a show in January, 1943 at the Durand-Ruel Galleries of New York after which it disappeared again from view. Craddock was more lucky. He left the United States when his profession was outlawed and took up residence at the famous American Bar at London's Savoy Hotel. Where he invented a little drink called the Dry Martini. One of my heroes. He also published one of the best cocktail recipe books of all time which you can still purchase and which I highly recommend for every home bar: 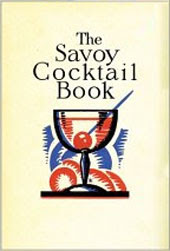 Secret bars flourished during Prohibition. As did bootleggers. One source estimated that Al Capone made $60,000,000 in one year during Prohibition when the average American laborer (like my Grandfather) earned $1,000.00. And the workers couldn't even have a legal drink after work. One wonders how the residents of northern climes made it through the sixteen winters of Prohibition without dying out altogether.
I have already seen promotions for Repeal parties at several of my favorite places such as El Gaucho in Seattle. I think it would be a kick to have a drink tonight at the location of an actual speakeasy such as the 21 Club or The Back Room in New York. Emmits, John Barleycorn or the Twin Anchors in Chicago, The Seelbach in Louisville or The Majestic in Kansas City. I am not sure if there were any speakeasys in my beloved New Orleans because I am not at all sure that they acknowledged Prohibition there. Maybe EVERY bar now extant in the Big Easy was a speakeasy. I have been lucky enough to patronize a few of these former speakeasies and they are uniformly great saloons still. Here is a shot of the bar at the Seelbach Hotel from perhaps the 1940s: 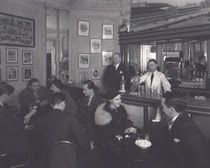 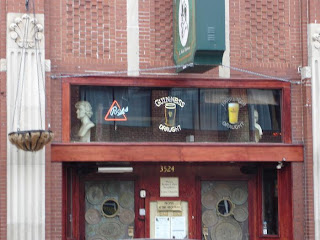 If you can't celebrate Repeal Day at an authentic speakeasy, you could host a Repeal Day party. If you have the energy. Which I do not. Perhaps making a cocktail popular during Prohibition is just the thing. The Colony was an upscale joint in New York during the dry years and when a Vanderbilt or Windsor wanted to step out for refuling they may have ordered the bar's eponymous cocktail:
The Coloney
1.5 oz gin
3/4 oz grapefruit juice
2 tsp maraschino
Shake well and strain into a well chilled cocktail glass.
For more information on prohibition, you can see the entertaining and informative web site created by the booze makers of America here. Whatever you may do to celebrate the end of the "Noble Experiment" it is better to remember that some experiments just fail. And some should never be tried at all. Long live the cocktail in all its glorious forms, along with its noble cousins of the grape and grain!!

As if I needed another reason to drink. But, this works for me.

Let us all raise a glass to the end of an error.

The last speakeasy here in town was sold not too long ago (Bogart's Back Room.) Reportedly, the new owners will keep the barroom, accessed by an unmarked staircase and unmarked door, above the new restaurant. I hope so.

And "The Savoy Cocktail Book" is worth every penny. I once held a first, signed edition at the American Bar. A treat of an evening with a fantastic bartender.

Yes, not exactly in need of another excuse to partake of libations, especially when my personal motto has always been "It's Happy Hour Somewhere." But having read this today, I will have to celebrate a "Belated Repeal Day."

My wife will groan.

I remember sitting at my Grandmother's kitchen table and listening to stories about speakeasies that she and Grandfather went to during prohibition. Elmwood Park, IL was apparently far enough out of the city (though not by much) that illicit drinking was pretty rife. I actually have my own memories of John Barleycorn. A school buddy bartended there for a spell in the 80s.

Thanks all! I hope your Repeal Day was well celebrated with a minimum of intrafamilial strife [Ben]!

Easy, that would be some experience to actually be in the American Bar! I need to travel with you!

HTJ, that would be really interesting hearing those sorts of stories from grandparents. My Norwegian people wouldn't have shared that!!