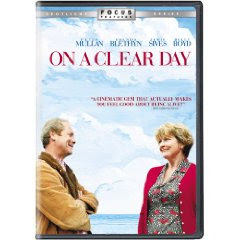 Gilgamesh. The Odyssey. Sir Galahad. Don Quixhote. Indiana Jones. Frodo Baggins. The quest as a dramatic theme is as old as storytelling itself. For a great quest story, you have to have a worthy but damaged hero. Who seeks reclamation by performance of an heroic deed. Involving a long journey. Against tremendous odds involving great danger. Perhaps even waging a contest against Nature itself.
The quest hero is almost always accompanied by a group of great pals who support him and never leave his side. At the end of the long, arduous journey, the quest hero usually seeks to acquire possession of a prize of great value. And by this possession repair himself. A final essential feature of a true quest is that it is never undertaken on a whim. Only when there is no other option to obtain redemption. When the choices are either glorious success or abject failure.
Against this backdrop, an attempt to swim the English Channel seems the perfect topic for a modern day quest story. Since August 1875 when Captain Matthew Webb made the first trans-Channel swim, this feat has been regarded as the ultimate in lone exertion and accomplishment. The web site http://doversolo.com/ states that from the time of Webb's crossing more people have been to outer space than have swum the English Channel. A crossing typically takes fifteen hours or more of open water swimming to cover the twenty miles involved. Without accounting for tides. In fifty degree water. If you are lucky. The shortest route runs from Dover to Calais... 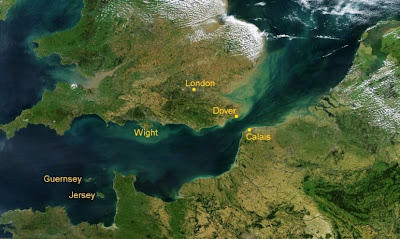 Even looking at it from a satellite is daunting.

Consider then the case of Frank. The main character of the lovely independent film On A Clear Day [Uni Dist. Corp. 2007]. One day Frank finds himself in upper middle-age and laid off from the job he has performed all his adult life. Distant from his wonderful wife Joan (played by double Oscar nominee Brenda Blethyn). Estranged from his son. Unable to rid himself of the distant but vivid memories of his second son's death. A death by drowning. Frank's primary philosophy is that "nothing can be fixed nowadays". And, implicitly, that everything is broken. Frank is nearing the end of the line. With no other options open to him, there is only one thing left for Frank to do. Attempt his dream to swim the English Channel.

On A Clear Day is the story of a very regular man's quest. Which, if successful, will let Frank gather prizes more than worthy of those involved in the pantheon of great quest stories. Self-respect. A relationship with his wife. His son's love. Freedom from guilt for his child's death. Triumph over nothing less than nature itself. Frank attempts to gain all this in the company of a loyal but eccentric group of pals including the ubiquitous (in Glasgow cinema anyway) and talented actor Billy Boyd who constitute his training team.

I stumbled upon this wonderful movie late one night a few weeks ago when I should have already been in bed. I was immediately gathered into the company of the characters and could not leave until the end credits were rolling. I am confident that you will enjoy and perhaps even love this film. As I do. Most of the time, the hero of a true quest realizes that, win or lose, the biggest prize is found in the journey. That is what Frank, and we, ultimately learn. In this time of widespread feeling that "everything is broken", we could all use a dose of Frank's dream. A dose of his grit. And we can learn what Frank learns. That things can indeed be fixed.

On A Clear Day, starring Peter Mullan, Brenda Blethyn, Billy Boyd and Jamie Sives. Directed by Gaby Dillal. See a trailer at http://www.imdb.com/video/screenplay/vi3941860121/. And another trailer below...

Sounds interesting. I'll keep my eye out for it. A good everyman story is always appropriate.

This sounds like the perfect film for the moment, M.Lane. Must be on the lookout asap. And so beautifully written about...as per ususal. I'll let you know what I think...as per usual. ;)

Hope your weekend is shaping up well. :)

Ben, trust me this is one you will like.

Uncle B, I just fell for this movie! You will too.

Thanks fellows for your visits and great comments!