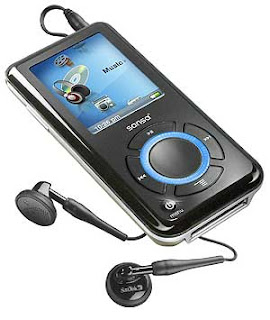 A red-eye airplane ride. WAY too early in the morning. I was in an aisle seat, nodding, trying to remain awake. A very poorly planned segment in a schedule that has spiraled out of control. Your Epic was NOT a happy camper.

Until this. Four places ahead of my seat was a three person row. With two persons in it. At the window a young rodeo cowboy. Clean cut, championship buckle, very short hair. Young. On his aisle seat, an older gent, dressed nicely for business. Asleep. With an mp3 player in his ears.

At some point I popped back awake because of some loud music. As I refocused my vision ahead of me toward the source of the music, I noticed that one of the older gent's earphones has fallen out of his ear, transforming itself as it tumbled free into a general broadcast speaker. Blaring old school, spinning mirror ball, break out the colored fog at midnight disco music. Circa 1979. I personally did not think that I would ever hear Donna Summer singing "Bad Girls" that loudly ever again. That fellow must have really had the volume turned up on his mp3.

I broke out laughing (I wasn't the only one) because of the contrast between this older businessman and his choice of early morning travel music. I was even more amused as I realized the horrid dilemma in which the young rodeo star found himself. About forty minutes left in the flight, at the epicenter of a very loud disco mix, half the people probably thinking it was HIS music. The expression on the lad's face was as if someone had shoved his head into a bucket of lye. He was simply goggling at the sleeping disco aficionado. Come to think of it, the cowboy was young enough that he probably had no prior exposure to disco music. At least that is how he looked. As he pondered his choice. To awaken a snoozing king of disco. Or not to awaken. That was the question. At four in the morning.

I waited in anticipation. Finally, the young man screwed his face into a look of dogged determination. The type that no doubt earned him the trophy buckle he was wearing. He slid down in his seat, stared ahead, and just suffered through it. Until a while later when the older gent awakened in the normal course, snatched up his earpiece, and (somewhat red faced) shut off the mp3. The episode saved my attitude that morning and made the rest of my longish day bearable. Actually carried me through to cocktail hour.

What a great little tale!

Haha! So funny... This is the exact moral quandary explored in the Careful Use of Compliments.

The cowboy has been brought up with good manners- (one should not wake up sleeping businessmen on red eye flights) but the blaring disco music made said business man his temporary nemesis and alas- good manners won in the end. But the question is- did the cowboy suffer because of it?

I would have woken him up ;)

I would paraphrase Barry Goldwater..."suffering in the cause of civility is no vice".

He was really a very urbane young cowboy....xv