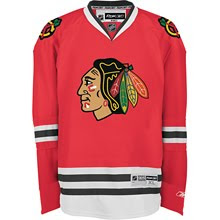 My Dad was away a lot. All the sunny months. Every so often, he would return to our little town in the north woods for a weekend. Resplendent in penguin or crocodile shirts. Alligator belts and shoes. Driving a Thunderbird, Toronado or Eldorado. Back in the day. When driving an Eldorado or Toronado or Thunderbird actually meant something.

In those days, telephoning home was prohibitively expensive. Writing letters was out of the question for men of action. So men of action brought gifts. Bushels of corn purchased at roadside for a Saturday boil. Little trucks painted like gas station chains seen along the way. And, once, a sweater.

You did not call them hockey jerseys. You called them sweaters. And, when you lived in Wisconsin circa 1966, you called them Chicago Blackhawks sweaters. The grandest of the grand. A team of the National Hockey League "Original Six". When Dad pulled that Blackhawks sweater out of the trunk of the Eldorado, you knew some things as fact. That he believed in you as a man in training. And as a Blackhawks fan.

Think of it. In 1966 era Wisconsin, there were no North Stars playing hockey in Minnesota. No Milwaukee Bucks playing basketball in the NBA. Just the sainted Packers playing football in the Autumn. But when the snow started falling in earnest and winter set in for the period after football championships were distant, frozen memories, there was hockey. And the Blackhawks. Every little out of the way nowhere town like mine had a hockey rink. Often flooded outdoors. And an amateur or semi-pro hockey team. Like the one in our county seat of Eagle River. A little town in the farthest part of Wisconsin that had the first indoor hockey rink in the state. Where my Dad would sometimes take his sons to watch guys sweat and skate and bleed for ten bucks a week. If that. The fellows that played in Eagle River never had to buy a drink in a local tavern. They were heroes. Rock stars. For ten bucks a week and no chance of ever playing in the NHL. A fellow like my Dad who played golf for nothing against Byron Nelson, Ben Hogan and Sam Snead on the PGA tour, then opted for a business life in order to support his family must have recognized a lot when watching the men playing hockey in Eagle River.

Those teams were so poor, you could not buy one of their sweaters. Even if you wanted to. So the lucky few wore a Blackhawks sweater. Nobody was a fan of the Detroit team. Or the Boston or New York teams. Nobody even recognized where Boston or New York was. Forbid, you were a fan of Toronto or Montreal and admitted it in public. That left Chicago. The Blackhawks were the only hockey team in the free world known to us then. In those snow-covered, lost days of long ago.

One day in late summer, when the long shadows of encroaching Autumn were already apparent, the Eldorado eased into its spot in our back yard, Dad emerged, and he presented my brother and me with Blackhawks sweaters. We had never seen anything more beautiful. In the realm of sports apparel, there is still nothing more beautiful than a Blackhawks sweater. We put them on. Refused to take them off for weeks. Until the snow and ice fell. And Dad was home all the time. And we got into the Eldorado and drove thirty minutes to watch a hockey game in Eagle River.

I do not remember who won the game. It does not matter. What matters is the two little boys, clad in over sized embroidered nylon shirts, leaning into their father while he explained the intricacies of the offsides rule and interference with the goalie. As our lips turned blue and steam from our breath rose into the frozen Wisconsin night...

You grow out of the sweater. You grow into the memories. The cheers of the crowd. The spray of ice particles as the players crash to the boards. Men giving it up for nothing but love of the game. Your dad putting a Hudson's Bay blanket over you to keep you from shivering. Hot chocolate steaming in thin paper cups that almost scald your fingers. Horns sounding. Your dad somehow getting your sleepy self into the car and home, way past bed time. Where you slept under mounds of covers. Dreaming of being a guy that found glory for ten bucks a week. Still wearing your Blackhawks sweater.

Decades pass. Your dreams bloom and fade in turn. Last week, out of the blue, my twelve year old son, the Future Rock Star, asked for a Blackhawks sweater for Christmas. I guess he saw me wearing mine. And, unlike his requests for more technological items, this Christmas wish is going to happen. His first sweater. A link to history. Of the NHL. Of his father. And of his grandfather. Who, on Christmas day, will lean on the hood of that long-gone Eldorado, hold out a 1966 era, boy sized Blackhawks sweater, and give me a nod of approval.
Posted by M.Lane at 3:27 AM

Email ThisBlogThis!Share to TwitterShare to FacebookShare to Pinterest
Labels: Dress, Give

I can't imagine 1966 without Bob and Carrol and Ted and Dallas, or Orr, or dare I say it Rougashon.

Great post. Thank you for sharing that with us. Where I grew up, we never knew much about hockey. Football was our sport of choice. That and basketball.

Thanks fellows! Toad, "Bob and Carrol and Ted and Dallas..." perfect.

I don't know who I'm more excited for, you or your son, for this asked-for gift.

No, I do know. I'm more excited for you.

Ben, you are right. I'm already grinning ear to ear in anticipation. I hope the rest of the month goes better for you.