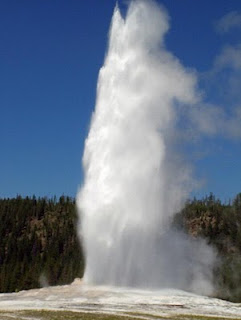 A man who undertakes to represent himself has a fool for a client.--Anon.
A lawyer who undertakes to do plumbing work has a fool for a plumber.--ML
I should know better. I really should. One of the very odd things I have noticed after turning fifty is that I now jump into doing things that I would not have even considered doing when I was thirty. In other words, when I was actually physically able to do them. I am not sure what the reason for this is but it is surely psychological. Perhaps something to do with reinforcing notions of youth, manliness, that sort of thing. I suspect that the annals of men over fifty are replete with events ranging from folly to fiasco and even outright disaster that were motivated by the desire to reinforce notions of youth, manliness and that sort of thing. Ladies reading this are chuckling. Ladies all know of this phenomena.

All my adult life, I considered my Norwegian blood proof to the male version of a "mid-life crisis". My gene pool is severely slanted toward reason and calm. Except for one little fact. I am only half Norwegian. My mother is Irish. Giving me the itinerant storyteller skills I use to feed my family. And, perhaps, making me subject to odd behavior over fifty.

Take, for example, the issue of work about the home. I generally loathe it. I spent my life from the age of ten to, oh, forty-nine, crafting stratagems and ploys to avoid it. Home projects tend to require that one [as my beloved Irish Redhead is oft wont to say] "get off your butt and do something". Come to think of it, my father was oft wont to say the same thing during the era of age ten to eighteen. In the past eighteen months, however, I have redecorated [with precise creative direction--I have no eye for decor] a bathroom, hung drywall in a pantry, spray washed the outside of my house and assembled a television stand [from a kit]. All without major disaster. Thus reaffirming my notions of youth, manliness, etc. All of which allowed me to set myself up for downfall and physical travails of the highest order.

Consider, then, my mood when I saw around midnight a few weeks ago a rather decent reproduction of the Old Faithful geyser [depicted in the photo above] erupting from the middle of my front yard. "Ah-ha!", I said to myself, "another opportunity for some useful and vigorous labor on the home front". Or words to that effect. I had a couple of brandy and sodas on board at the time. My diagnosis was immediate and accurate: a ruptured sprinkler line.

My first warning of the things to come should have been when I was unable to find the water cut off valve serving the sprinkler lines. In my behalf, it was a very dark night and I really had no idea where the valve was. I've only lived in this house seventeen years. These things take time. The result was that Old Faithful rendered its glories on my property for a few more hours until it was light and I was awake enough to tackle the job at hand.

Actually, my father in law told me where the cut off valve was. Fine man that he is, he told me without a hint of a snicker. He mildly suggested that I call the plumber. I replied a bit coldly that I had seen him repair sprinkler lines many times and I felt that my period as an apprentice had come to an end. I was ready for my journeyman card. I mean, these are plastic pipes buried at shallow depth in a subdivision yard. Not a major plumbing challenge requiring service vans, augurs and other implements of the master plumber's craft. I stalked to the tool shed, procured the necessary pipe pieces, glues, and a shovel, and set to work.

My second clue that all was not well with this project was when I dug a small hole where the broken pipe had been spewing only to find that the broken line had been caused by a huge oak tree root that had, with time, bent the pipe until it snapped. The general situation is shown in this photo:

The root that caused the break is not the one you can see. It is a lot larger and lies underneath the lines.

This finding resulted in the conclusion that I could not merely repair the pipe where it was deformed by the root. Nor could I move or obliterate the root. The only thing to do was to reroute the [two] water lines. To direct them out of the root-inflicted death zone. A mere three by four foot rectangular extension of the two lines would be just the thing. Easily accomplished in time for a breezy luncheon.

The problem with this theory was that in order to reroute the two lines in my desired fashion I had to dig more than a little hole. I had to dig what turned out to be a more or less regulation sized grave...

The dimensions of the hole were apropos, as it turned out, because for much of the next twelve hours of chain gang inspired labor I was pretty much convinced that I was going to need burial in that hole after someone else finally repaired the broken pipes. My chain gang reference is perfectly accurate since it turned out that the earth of my front yard is laced with tree roots of various dimensions. Trying to dig my own grave in this yard defeated my sturdy shovel at about hour four and a half. At this point, I did something I rarely do. I got really stubborn. Flinging my gloves and [defeated] shovel to the turf, I stomped to the tool shed to retrieve an axe and a hand saw. Yes, "stomped" is the only applicable term. I don't do that often either.

The next several hours were cheerily occupied with what can only be described as trying to chop through ground that was more like plywood impregnated with steel wire. Without causing further damage to the water lines and associated electrical wires of course. At one point, the IR manifested on the front porch to remind me that I had already experienced one heart attack [but, really, this was YEARS ago, ancient history really] and that perhaps I should call a plumber. My reply can only be described as guttural and somewhat resembling Old Norse. Now, the IR truly loves me. And she is not known for making a point and walking off. But she is the most intelligent person I've ever known. An intelligent person faced with a fifty one year old spouse, covered head to toe in dirt, holding an axe and gutturally speaking Old Norse has really only one option. A return to within the walls.

Hour twelve dawned despite the appearance of what the poet Burns no doubt called "the gloaming" of the day. The grave complete. The piping redone, viz...


I could not take a good, complete photo of the job because my arms were exhibiting a disconcerting degree of muscle spasticity that kept me from operating my phonecam very well. The project was a success at least! And well before nightfall at that! Only a reinstitution of the water flow remained. From my kneeling position in another part of the front yard (a tip to you, my readers, the forces in charge of water lines always put the cut off valve pretty close to your front curb near the street--no need to send me money, this is a gift to you) I opened the water valve and glanced expectantly toward the grave. Only to see... 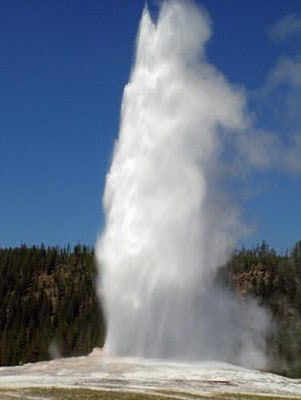 Perhaps a tad larger than twelve hours before. I didn't stare. It is more accurate to say that I goggled. It appeared that, in my ultimate attention to detail, I had failed to cement one of the pipe joints. Understandable as that may be as an explanation for the renewed eruption, I admit struggling with a bout of Old Norse sobbing. I felt like howling a Wagnerian chorus, but I am a better neighbor than that. Instead, I shut the water off and staggered into the house for a drink, a bath, and sleep. In precisely that order.

I fixed the stupid thing the next morning, filled the grave, replaced the sod, and all has been well since. Admittedly I feel a distinct sense of accomplishment. The sort of accomplishment that will, and should, never be repeated. But a sense of youthfulness? Of manliness? Of renewed vigor? Not close. I felt like a one-hundred year old man for about ten days. I did gain a renewed sense of humility, which is essential. But the mere fact that the IR knows that I am still capable of (what a character in Animal House called) a "big stupid gesture" of love for her made all of it worth while. Because it dawned on me that this was what I was about the whole time. The next one won't hurt so much. I hope.
Posted by M.Lane at 9:36 AM

Email ThisBlogThis!Share to TwitterShare to FacebookShare to Pinterest
Labels: Do, Laugh

That is fantastic! I don't know if I could have stuck with it for 12 hours. I like to take breaks, which normally involve a large amount of gin with ever decreasing portions of tonic. But, I must say I am very impressed.

And, don't concern yourself with the cement. I had a sprinkler valve to replace, which I did and cemented everything. After I turned the water back on, it held just long enough for me to put my head right over it to inspect it. Then, I was taking a faceful of water. Apparently, the instructions claim to allow it to cure 24 hours before putting it under constant pressure. Apparently, 24 seconds is not an acceptable subsitute.

I would have eaten turnips before trying that. Most excellant

You're a better man than I. A better plumber too, no doubt.

Turling, there are INSTRUCTIONS on the sealants? Good Heavens man. That is news. It might explain a lot of my problems...

Cashmere, don't be. It was miserable.

Ben, a job hard won is more like it.

Toad, if offered another chance, I'm going for the turnips.

KSA, I doubt it. On either count.

Thanks all. I'm going to rub some linament on my joints.