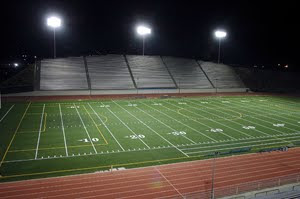 Last Thursday night, thirty-six years ago, was the night I saw my first High School football game. It was my third school in four years. I didn't know that it would be my third of five schools in six years. It was the best place in the world.
In that locale, football at night in the last week of August was a harbinger of Autumn. The night was clear with a full moon rising over the lights of Lumberjack Stadium. Yes. Lumberjack Stadium. That was the culture of the area where I was born. The temperature was in the crisp mid 50s [F.] and was ideal for one's debut as a High School Man. The combination of cool air and moonlight was the perfect transmission vehicle for the sound of drums from a marching band. And for cheers.
I nervously dressed in my one pair of home-starched and ironed khakis, a long sleeve shirt and sweater, a jacket. I was nervous because of Kim. Kim occupied the hallowed position of Love of My Life that year. The first in a long, glorious, line of holders of that title. I didn't really know her. I just saw her in the school hallways every day between classes. The mere sight of her was enough to tie me in knots. My mom and dad offered to walk with me the eight blocks from our motel apartment to the stadium, but I demurred. What if Kim saw me with an escort? No thanks.
I could see the glow of the lights and the sound of the drums before I got to the stadium. The cold air was thick with the scent of leaves and the oncoming change of season. I showed my Freshman ID card and climbed up the bleachers on the "home team" side until I found a seat by someone I knew. The game got under way to the thunderous cheers of our fans. The Lumberjack faithful. I have only random images from the rest of the evening. Boys clapping each other on the back after our team scored. Hot dogs. The crackle of the stadium announcer's voice. The band. The cheerleaders dancing in their school colors of red and white. Clouds passing by the moon.

I stayed on alert for Kim but did not see her. It was a disappointment. As I walked out of the stadium exit after the end of the game, I rounded a corner and there she was. Talking with girlfriends. I remember the next five seconds like a slow motion sequence. My glance and thrill at seeing her. Then. She caught me looking. And she didn't look away. Black hair. Blue eyes. Pink cheeks. White teeth. Big grin. A cheerful "Go Lumberjacks!!". All I could manage in reply was a sheepish grin and a wave. My life was over. There was nothing more to accomplish. It was all gravy after that.

Last Thursday, we lost the first game of the season. I say "we" because even though I only spent one year at the school I feel like I belonged there. One year as a Lumberjack left me with a rich store of fond memories. Memories that become particularly piquant when August is on the wane and football is in the evening air. Every year when opening night comes around, I feel like I'm cheering for the red and white again. Fifteen years old. Scanning the crowd for a certain pretty face.

Maybe I'll go to a reunion of my class one day. Maybe I won't. But I know this for a fact. In that stadium last Thursday night, there was a shy boy experiencing his first Big High School Moment. I just hope that his first football game was as glorious as mine.
Posted by M.Lane at 5:23 AM

Man...I'm sitting in Memorial Stadium, Florence South Carolina in 1975, as I read your story. Tammy, not Kim. Palpable.

Thanks fellows! I really appreciate the nice comments.

In my hometown (Western PA--think "All the Right Moves"), Friday night football was the absolute highlight.
This past Friday, my husband and I walked past the local HS football game, and I remembered the thrill-- not the football, but the thrill of looking for my crush. Your post brought back all those bittersweet memories.
My sophomore year, I changed to a prep school with Saturday afternoon games. Even though I was a varsity cheerleader there (a HS dream come true), it could never be the same as that blue-collar, steel-mill town, Friday night football!

What a wonderful set of memories to resurrect. And you get to remember them year after year at this time. Those are the best.

All I can say is: Damn well written stuff. Ever get anywhere with the elusive and fetching Tammy.

Well done. Shades of Joseph Wechsberg. Still wanting to know if you'd like that extra copy of Blue Trout and Black Truffles I offered you, in my email a while back? Jackie

Cashmere, I knew it! The best name in the blogosphere AND a cheerleader!??!! I remember your comment on my post about Namath. I'll bet the experience was twice as potent when you were on the field.

Ben, thanks. I agree.

MLS, thank you! Never had the nerve to approach her and I moved again the next spring. Suffice to say my mad social skills were still in the formative stage at that point...

JAD, thank you very much! Say, I didn't forget, it has just been a crazy summer. I do have a copy though and thanks so much for the offer.

BTS, that was what I was shooting for. I'm glad you liked it.
ML