Hank And Me On New Year's Eve 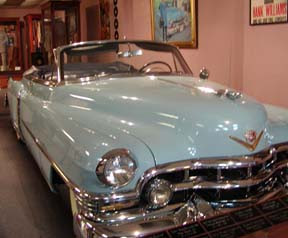 To be honest, I don't think about it all that much any more. I mean, it has been fifty-eight years. A lot of other things have happened to me in that time. I've had a successful business. A great family. Decent health. I have no complaints.

Every so often though, my mind drifts back to New Year's Eve, 1953. The coldest, darkest night I ever saw. I got tangled up in it because my dad asked me if I wanted to earn some extra cash. A sound idea. I was eighteen years old, home from my first semester at Auburn. A college man can always use more money in his pocket. So I said yes. I didn't really have much choice since Dad was pals with him. From way back. And all I really had to do was drive him up to Charleston, West Virginia for a New Year's Eve show. Then maybe on to Canton, Ohio for another show the evening of New Year's Day. Simple enough. Except the weather had other plans for us.

I knew who he was, of course. Everyone knew his songs. That he was a hell raiser. That his career was in the shade at the time. But he still had that voice. That made all the difference.

It was cold and cloudy all afternoon as we got ready to leave. Oddly dry for a hard winter day in the deep south. We met and shook hands. He had a whimsical, crooked smile. You immediately liked him. I remember he was a lot quieter than I expected. And a lot thinner. We got in that powder blue Cadillac convertible and headed north. Any other day, I would have killed to drive that car. That night all I could think of was how cold it was going to be under the drop top. I drove in a respectable way until we got out of Montgomery, then he chuckled and told me to get on my right foot and "let her eat". So I did.

It was snowing as we got to Birmingham and spent the night. One of those rare southern snow storms that just fall on you when you least expect it. On the way up there, "Jambalaya" came on the radio and he asked how I liked it. I told him it didn't make any sense. He just laughed and said that was because I didn't know any French. We had dinner that night in a diner and he gave the waiter a $50 tip. He said "that's the best tip you'll ever get!" Nothing much else happened that night. Compared to the rest of the trip, anyhow.

New Year's Eve it was still awful weather but we managed to get to Knoxville. He cancelled the show for that night in Charleston because we were making such slow progress but he actually got on an airplane in Knoxville headed toward Ohio that came back to the airport because of the weather. A little after six in the evening we checked into the Andrew Jackson Hotel in Knoxville and I ordered steaks for us at the restaurant. It was the nicest hotel I had ever seen. The steak was great. He didn't eat much.

Later, he wasn't doing too well. He had been complaining of back pain and who knows what all the whole trip and I thought we should get out of there and drive all night if we had to to get up into West Virginia then over to Ohio for the New Year's Day show. We checked out at 10:30 p.m. and I had to get a couple of the bellmen to help me get him into the back seat of the Cadillac. He seemed really ill by then, but the doctor I called to the hotel said he could go on to the show. The doctor gave him some sort of shot. We hit the road. What did I know? I was just a kid. A car driver. I was no paramedic. It's hard for people to understand now. No cell phones. No OnStar system in the car.

Everybody knows, or thinks they know, the rest of it. I've really tried to forget it. I got a traffic ticket someplace on the way to West Virginia and the weather remained dangerous for driving. He didn't talk much, just lying under the blanket in the back seat. The fact that he said little was of no concern to me since he was known for being quiet when he was off stage. We stopped for gas once or twice and he looked to me like he was resting. He had a real peaceful look on his face. It was eerie, as if we were in a powder blue, leather wrapped space capsule flying through the pitch dark. Snowflakes dashing against the windshield, the headlights plowing ahead into the night.

Finally, he wouldn't respond to anything I said. We were somewhere in the middle of no place in West Virginia and I pulled into a gas station. His arm slipped out from under the blanket and I touched it. I'll never forget how cold he felt. So I found out where the hospital was and I took him there. That was it.

I'm seventy-six now. Like I said before, I don't think about it much. But sometimes, like tonight, when the wind blows cold from the north, the great-grand kids are asleep, and the night is brutally dark, it happens. Brown whiskey finds itself in a crystal rocks glass. The fireplace burns with that low crackle that fights off the cold and the dark places. I put "I'm So Lonesome" on the stereo. And I just look out the back porch window. And I think that, for all his amazing gifts, all his money, all his fame, I am the lucky one. He taught me that. So I raise my glass against the reflected firelight in the windowpane. Here's to you Hank. Happy New Year, buddy.


Background Note: George Carr was an 18 year old college man who drove Hank Williams on the night he died in the back seat of the blue Cadillac shown above. I pieced this together from various stories on line. The first time I read about Mr. Carr's experience, I realized how good my "bad" days really were. I share his story and my realization as Epic New Year gifts for all of you.
Posted by M.Lane at 6:50 AM

Thanks...that was a great read...Happy New Year to the Epic from the Sportsman....

Thanks for the story -- it was great! Happy New Year to you.

Wonderfully written. Thanks. M. Lane I
am looking forward to reading The Epic
In 2011!
BarbaraG

What great writing! I enjoyed reading it. Happy New Year!

What great writing! I enjoyed reading this. Happy New Year!

Thanks everyone! I really appreciate the positive feedback.

I saw a story about HW that barely mentioned Mr. Carr and I thought he was fascinating.

Wow. What a story. Actually gave me cold chills . . . especially with his songs playing in my head as I read. Thank you. xoxo