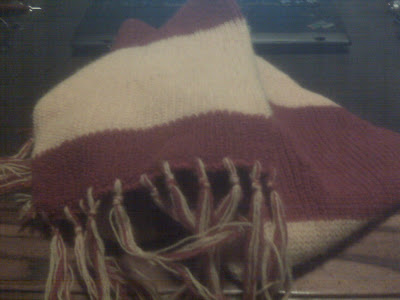 I had been waiting all year for the moment. When I would stroll down 60th Street in New York City, on a day so clear and cold the air crackled, dressed in my big-city topcoat of wool and cashmere. Cross Park Avenue. Then turn left into the nondescript doorway. Down the stairs. Into my favorite place. Populated by all the familiar, friendly faces.

Last week as I reached for the brass handle, the door opened toward me and a lovely young woman stepped out into the Manhattan air. She stopped just a moment to peer at my outfit, then, going on her way, she gave me a big grin.

Nothing like a bright compliment to jump-start lunch. I was already jolly and warm well before the bottle of Bordeaux touched down on the cloth covering my table.

Looking back, the event should not have surprised me. Because, you see, I was wearing my Magic Scarf. I always meet nice people wearing it. I always have fine experiences with it wrapped snugly about the pale Norwegian/Irish skin of my neck. The magic of the garment brings those experiences and people to me.

Consider the time I was on campus at my Alma Mater. It was a brisk autumnal day, not requiring a coat but a day when a scarf was just the thing. Tossed loosely around the neck and shoulder. A nice young couple stopped me and asked if they could bother me for any tips on restaurants in Paris as they were going there on their honeymoon. Amused, I explained that I had never been to Paris and could not help them as a result. They apologized for the imposition on my stroll, but said that they assumed I was familiar with Paris because of the cool way I wore my scarf. Magic.

The first time I visited Kansas City, it was during a brutal Holiday blizzard. When I climbed out of my rental car at the front door of the President Hotel, the doorman looked at my scarf and cheerfully said "Yes! A Chiefs fan!". Later that evening, he got me a table in the apparently booked up hotel restaurant.

My favorite magic scarf experience also took place in Manhattan. I was ambling toward my club after a taste of whisky with a pal at Sir Harry's bar in the Waldorf-Astoria. A dazzlingly cold late afternoon. A group of school children was walking in front of me. Detained at a crosswalk stop light, one small boy of about ten turned and saw my scarf.

"Sir? Is that a Hogwarts house scarf"?

His companions giggled softly at what they considered a silly question to pose to an adult. Immediately recognizing a fellow literary romantic, I peered down at the young Harry Potter fan and knowingly replied...

"Yes it is." Then, leaning forward a bit for added emphasis, I continued in a stronger tone...

The boy goggled and his pals quit laughing to assume the same astounded look at hearing an adult businessman type utter the famous levitation spell. The light changed and the group of newly energized boys took off, leaving me chuckling all the way to my room. I still feel delighted every time I recall the event.

There is no question that a certain few gifts bear special charming powers. Most people assume that this magical influence stems from the gift's provenance and price. I heartily agree, but not in the way one might imagine. My magic scarf was a gift from my dad. He bought it at a flea market for a couple of dollars on a day when he was not particularly flush with cash. Because he was thinking of me away at school in a place where winter was setting in. It is made from one-hundred percent virgin polyester fiber. But it carries the provenance of a father's love. And his desire, years ago, to help make sure his boy was warm. That is the essence of the magic it contains. A power that never fails.

During this great season of gift giving, it doesn't hurt to remind ourselves that we too can give magical gifts. The trick is to take the time to use our hearts in the selection process rather than other, more earth-bound, influences. The investment of love in the giving of a gift, no matter how humble it may be, is what imbues it with magic. This, then, is my Holiday wish for you. That you give, and receive, all the magic of this wonderful time of year. And that the magical things you receive continue to charm and enchant you. As my inexpensive, plastic fiber, flea market scarf has repeatedly charmed and enchanted me.
Posted by M.Lane at 5:24 PM

This is a beautiful post. Thank you so much for sharing it with us. A perfect post for the magic of Christmas and all that it stands for. xoxo

Great stories and rememberances! I sure could use a scarf like that. Merry Christmas!

A perfect post. It shows that part of being a man is to cherish things like your scarf and understand the emotions all around it. From the smile of a pretty lady all the way to a Father's love, you have wonderfully shared it with us. Thank you and may you wear it in good health for many,many years to come.

Love the tale of the "magic" scarf!

Thanks everyone! The love imbued power of certain things is a topic that fascinates me. I'm glad you enjoyed the post and took the time to comment!!

What a magical wish you have for your readers! Thank you! Season's Greetings and Merry Christmas.

You are awesome. NM.

never fails -- i'm never disappointed whenever i stop by. hope you'll allow me to post a link on my site to this post. it's a great example of, geez, everything that can be right about the holidays.

i won't put up the link until i hear it's okay, and if it's not, i don't need to know why, nor will it stop me from dropping by every now and then.

happy holidays to you.

Sligo, what a nice thing to say. Of course you may link to it!

Ben, great to see your comment again. Have a great end of the year.

Cashmere, you are making me blush!!

Sexy, so do I. And I love your name. Good choice.

Beautiful! It reminds me of the time we were shopping and a little girl thought my husband was Santa :O)