Paris 1: Come Fly With Me 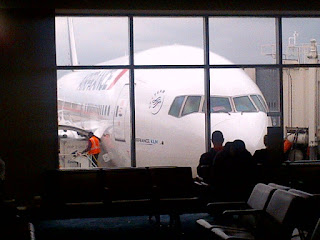 The week before I boarded this huge airplane, I found myself traveling through the Atlanta, Georgia airport with a long layover that stretched into evening.  After a typically satisfying meal with my friends at One Flew South on the "E" concourse, I realized that the gate was only a few hundred feet away.  My gate.  The one through which, in a week's time, I would be striding to begin the Grand Adventure.  How could I resist? I walked down the concourse and gazed at the people boarding Air France, incredulous at their nonchalance.  Was I really going to be one of them? Was the trip actually going to occur?  Seven days to go...

I admit that, the last week, I had a focus problem at the office.  I would be in the middle of something and just stare out the window.  I would thumb through one of the many books about Paris I have collected over the years, or the very good travel guide my wife gave me for Christmas.  It was bristling with "sticky" notes at critical spots.  I realized with four days to go that I had over-prepared.  I was saturated with information. When my father was playing the PGA Tour, he used to say you hit a point where you just cannot practice any longer because you start to lose your edge and you actually get worse.  In college, my [one] economics professor used to refer to the point of diminishing returns.  In my work, you get to the point where you have prepared so much for a trial you quit thinking.  All of these examples adequately describe my mindset four days before departure.  It was time to take a step back.  I found the perfect tools to be a martini and a big book of Leroy Neiman paintings of Parisian scenes that usually resides on a credenza in my office.  The big colorful paintings were just the thing to calm my overstimulated senses.

The only other European trip I had ever seriously considered was years ago, before the Era of The Irish Redhead.  A pal of mine from school wanted to take a golf tour of Scotland.  I had the time and the money.  Just never went.  Frankly, I was pretty intimidated by the whole notion of traveling abroad by myself and meeting him in London.  Fool.

A million miles of flying later, I lack the apprehension about logistics I had back then.  Still...I had this nagging doubt that I could pull it off for some reason.  Luckily, after booking the flight and a hotel, getting one advance restaurant reservation [months in advance], booking a guided tour of Versailles, a walking foodie tour of Montmarte, and procuring a few hundred Euros in cash, the trip had developed a life of its own.  At four days, it reached critical mass.  Barring some horrid medical event, there was no way it was not going to happen.

I couldn't sleep the night before departure.  I spent the night packing, drinking and playing French music.  My travel satchel contained blank notebooks, pens, the sticky note bristled guidebook, a plasticized folding map of Paris, cash, daily medicines, MP3 player, my new Kindle Fire, and the copy of my hero A. J. Liebling's opus "Between Meals, An Appetite For Paris" which raised my desire for this trip to a fever pitch so many years ago.  I also threw in a copy of A Dog's Head by my current favorite writer, Jean Dutourd, for good luck and to show off with while reading in some Parisian park or another.

I chose my travel attire carefully, even more so than usual.  Black Brooks Brothers blazer with black buttons. Tan wide wale corduroys. Wine colored long sleeve merino wool knit shirt. Pink and wine patterned pocket square.  I was influenced by two factors in these choices. That we had to fly to Newfoundland before turning east toward Europe.  And that the weather in Paris for several weeks prior to my trip had been nothing short of awful.  That led me to also pack a light trench coat, a black lightweight waterproof shell, and the L.L. Bean weatherproof lined ski jacket that I bought for my Wisconsin trip last December.  All choices that turned out to be providential.

Morning came.  Departure day.  The Irish Redhead took our son out of school so they could go into the airport and see me off. I was really touched. We sat around outside security for awhile and looked at each other.  Breaking the ice, my son the Future Rock Star made gentle fun of my "Euro looking" carry bag. Then a photo, hugs, an au revoir and I was through security and on my way.  I've always been awful at saying good bye.

I had a couple of hours in Atlanta before my flight to Paris, so I slid into a bar stool at One Flew South which happens to be about a hundred yards from the Air France gate.  It was late Friday afternoon and most of the international concourse bar patrons were in a festive mood. My pals Tiffany the bartender and Terrence the head waiter were very excited that I was off to Paris.  Terrence told me to make sure one day to be on a river boat on the Seine at nightfall. After a couple of perfect Vesper cocktails and best wishes all around, it was time to head down to the boarding area.

At the gate I looked at my fellow travellers.  Some tired.  Some bored.  But most...most looked...excited.  Happy.  I wondered if I were seeing my reflection in their faces.  I have been at a thousand boarding gates.  I never saw faces with excitement in them.  A sort of glow.

The thing about airport gates is that unless you just walk away sooner or later they call for you to board. Then the game is on.  Minutes passed. I could feel my heart rate going up. I was triple checking my boarding pass when they called for first class boarding. In a French accent. The scanner at the gate bleeped and a green light came on indicating that I was not barred from entry into the gangway.  This was it.  I took a deep breath, tried for the hundredth time to recall my catalog of basic French phrases, and walked down the collapsible tunnel to the waiting jumbo jet.  I was on my way.
Posted by M.Lane at 3:12 PM