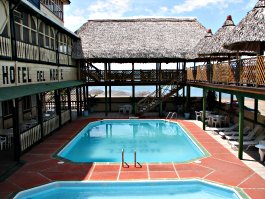 After two hours, it was apparent she wasn't going to show.  I was sitting on the upper pool deck shaded by a thatched umbrella where she would have to see me when she walked out from the lobby.  I was drinking dark rum out of a glass that had the faint red outline of a woman's mouth on the rim. It was blazing hot outside, even in the shade, the steady breeze from the Bahia de Amatique doing little to dry the dampness of my linen shirt. Enrico the barman had left me a pack of firecrackers. I lit one when I needed another round. By the time I knew she had read the letter and made her decision, the remains of most of the firecrackers lay about the feet of my plastic chair. I stared at the lipstick on my glass.  Then at some birds fishing lazily on the water.  Then at the lipstick again.  I would have bet a million dollars she would walk through that door wearing her polka dot dress and her big straw hat with the grosgrain ribbon. I suppose she did.  Just in the other direction. Out to the port cochere in front where he met her in a hired car. Ultimately it must have been something I said. Or something I didn't say. Or both. We never really know.

Sure, I could have killed him before she read the letter.  I had plenty of chances and I was as good at my business as he was at his.  In Puerto Barrios nobody would have noticed or cared.  But that wasn't the reason I made the trip.  And I wanted her to come to me straight up, without any influence, due or undue.

After a while the light got soft.  I could hear the three-man combo tuning up in the corner of the dining room across the swimming pool.  No customers this evening but me.  An easy night for Enrico.  I would make a simple meal of it.  An avocado salad.  Pompano grilled over wood with fresh limes.  Perhaps papaya for dessert.  And a bottle or two of the flinty Tavel Enrico kept ice cold.  That would at least salvage something of the day. I kissed the lips on my empty glass.  Then I lit the whole pack of firecrackers with my battered gold Zippo and threw them into the air. The pops and flashes danced over my head and a little cloud of paper scraps drifted out to the sea alongside the hopes I had held some hours before.

Post-Script:  I am celebrating my 54th birthday next week. I spent a memorable time once at the Hotel Del Norte.  Perhaps it is time to return.  ML
Posted by M.Lane at 4:35 PM

Something of the Hemingway protagonist in this prose...I enjoyed it!

MLS, thanks! That hotel makes you feel distinctly Hem.

I can see the Papa, but I'm more thinking Ian Fleming, but in first person rather than third.

Hi Ben! Wow those are two great comments, thanks! I have some good ideas for future stories from HDN.