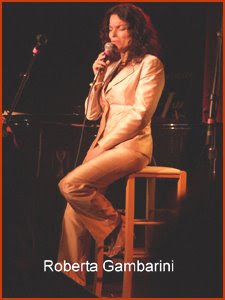 Lush Life. Billy Strayhorn must have been in a lot of saloons at all times of the day by the time he wrote this song as a teenager in Pittsburgh. Anyone who could come up with the term "twelve o clock tales" had been around. Trust me.
Lush Life has been recorded a lot, and it is one of my favorites, but unquestionably my favorite version has always been that of Sammy Davis, Jr. When SDJ hits the pathos laden
Romance is mush
Stifling those who strive
I'll live a lush life
in...
some...
small...
dive......
you had better be sitting down. Merely being sober won't help you.
Perhaps due to the reference to "girls I knew" in the original Strayhorn lyric but more likely because of the power of SDJ's rendition (combined with my several year sequence long ago of relationships that could only be described as bizarre), I always considered Lush Life a quintessentially male saloon song. That is, until the night my great pal Colonel Joe and I found ourselves in Seattle's Jazz Alley and we heard a young lady named Roberta Gambarini sing it.
Colonel Joe is a retired military man, an attorney, a world traveler and an Epic prototype. A man who has been around a bit. Not prone to being taken in by just any old song sung by just any lady. The MC that night at Jazz Alley introduced Miss Gambarini as being a very talented singer who "gets it". He understated it.
Miss Gambarini has a gorgeous voice, beautiful range and a solid grasp of her material. Victor Schermer said of her in All About Jazz:
Gambarini has thorough command of a pure, clear soprano voice, perfect pitch, and a natural and intuitive grasp of jazz. Her timing and articulation are exquisite......What is totally mind blowing about Gambarini's singing is the was she does scat. You have to hear it to believe it--she improvises with an agility, virtuosity and nuance of phrasing that are beyond all expectation...She sings like Charlie Parker played the alto sax...
When Miss Gambarini took the stage that evening and began her set, I was amazed that I had never heard of her. As she went from song to song I became convinced that to find a lady jazz singer who you can argue is better than Roberta Gambarini you have to rely upon voices that are available to us only in recordings. Voices that have names like Ella. Or Sarah. When you compare her to all of the talented ladies currently practicing their craft in jazz, it is not even close. Her first album "Easy to Love" (1996) was fabulous. Her second album "You Are There" (2008), recorded with Hank Jones, is even better. If you are lucky enough to live in a cool jazz outpost like I do, you can just stroll down to your local little jazz record store and pick them up. Our cool little local jazz store is called Amazon. Otherwise, you can check out Miss Gambarini's song samples at her web page http://myspace.com/robertagambarini. Better yet, click here http://www.youtube.com/watch?v=gbZeEGRj-JYand see for yourself. But the best thing is to see her in person as she also has a charming stage presence. And she sings Lush Life.
That night in Seattle, Roberta Gambarini tumbled broken-heartedly through the last stanza of Strayhorn's classic:
And there I'll be
while I rot with the rest
Of those whose lives
are...
lonely...
too...
Silence. She continued to gaze, no doubt in some painful reverie based in the fact that I was married. More likely it was the fact that Colonel Joe was married. The room was entranced by the musical philter that had been applied to it. Colonel Joe and I stared at the stage and raised our martini glasses in tribute. Then that room full of jazz cats exploded with applause. The Lush Life. It doesn't get any better than that.
Posted by M.Lane at 9:16 PM

Email ThisBlogThis!Share to TwitterShare to FacebookShare to Pinterest
Labels: Listen