I had the horrid experience today of having to get up at the crack of dawn (actually at the crack of the crack of dawn) to go to the airport for a flight that was delayed two hours. This sort of thing always causes me some form of mental boomerang effect. I get myself awake and ready for the day, get my energy level ramped up, and then a longish delay and BLAH.
In a valiant Epic attempt to find some sort of enjoyment in the situation, I happened upon two things that raised my spirits considerably. The first appeared when I was leaving a comment on another blog and was asked to put in one of those sequences of random letters and numbers to validate my submission. The reason stated for this task was to prevent "automated robots" from posting comments! I can see it now. A room lined with stainless steel decor items hidden at the top of a remote (but very luxurious and replete with very good looking underlings) mountain. A summit meeting between nefarious masterminds like Dr. Evil and Ernst Stavro Blofeld where they plot how they are going to launch an army of "automated robots" (as opposed to the NONAUTOMATED variety of robot) to sabotage blogdom and hold it for ransom. Probably for ONE MILLION DOLLARS.
You can tell that despite remaining in airport purgatory, I am highly diverted.
The second thing was reading Mel Morris' post this morning at melissacmorris.com. In this entry she describes being torn from her bed in a nice Scottish hotel by a series of false fire alarms. What I found inspirational about this piece was her ability to take a very humorous set of photos in the hotel lobby during the disturbance and to make a GREAT posting from it. My favorite photo was one showing Mrs. Morris sitting in the hotel bar looking rather cross while a fellow sitting behind her in a bathrobe is seen drinking a cocktail. During a fire alarm. At 2:15 a.m. My kind of guy.
Thanks to MCM for reminding us not to lose our sense of humor and to use that most important sense in trying situations to make them palatable. And thanks to whoever thought far enough ahead to give the rest of the blogosphere fair warning of the army of automated robots waiting to pounce! Here is a photo of one of their henchmen that I managed to get from a pal at the CIA: 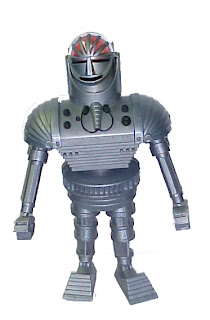 uy, sorry to hear about the flight delays -- they really are so annoying.

and thanks for your kind words about the fire alarm post. i've always been a 'when life gives you lemons...' kind of gal.

hope the rest of your traveling went smoothly!