I admit it. I was going to post today on a completely different subject, but I was flying home from a business trip and was diverted by seeing no less than four males wearing dress hats!! Civilian, business traveling males. Wearing hats just for sartorial splendor! What in the world was going on? I pondered whether I had mistakenly (perhaps due to my detailed investigation of rocks glasses reported below) taken a flight to Barcelona or Capri but after looking closely about me I confirmed that I was in the Atlanta airport where I was supposed to be.


Which left me considering whether this was just a snazzy but random series of sightings or the leading edge of a fashion wave. On the one hand, four hats does not a wave make. On the other hand, I have never seen that many hats before--certainly not in the Atlanta airport. I have always loved the notion of dress hats for men but with the demise of the business hat in America caused by JFK's bare-headed inauguration I have never had the nerve to wear one. I did buy a straw boater one time during the depths of an F. Scott Fitzgerald phase but I could only get myself to wear it to church on Easter Sunday. Where it was VERY well received by the ladies, I might add. The octogenarian ladies anyway.


I was going to take some photos of these hats but I was afraid of being thrown a beating [an apt term from a Brooklyn pal of mine] and I did not have the nerve to walk up and ask permission. Call it rookie blogger anxiety syndrome. Instead, I have exemplars of the hats I saw as follows:

This is a gambler hat. I saw two gentlement in suits walking with these hats on. The look was very good. And, no, there were no corporate logos on the hats or event logos or advertisements of any sort. Just a plain dress hat.

I saw one fellow wearing a very sharp felt hat like this one. He must have been a film director or a famous jazz man. Probably not a European though or it would have been a beret. 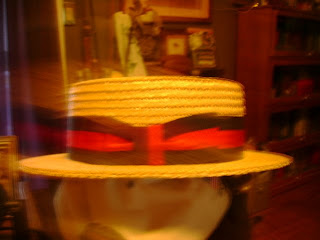 This is MY straw boater. That is not my head under it. I put this photo in only to show I do own one. If you are an octogenarian lady, I apologize for the flutterings this is causing you.

Without question the best thing I saw today was a boy of perhaps twelve, wearing slacks and a nice shirt and this sort of dressy "outback" style hat!!! I looked closely for any sign of an adult holding a weapon of any sort aimed at his head but I was unable to identify any external threat sufficient to make a boy dress up that well in a public place and look happy with himself. I did take the liberty of calling out to him that I liked his hat and he gave me a thumbs up. His mom gave me one of "those" looks.

The concluding piece of evidence on this issue in my opinion is provided by the Village Hat Shop stores in California. They have a multitude of hats for sale. They have four locations. Consequently, there must be a lot of people making hats and buying hats. Check out their fantastic web site at http://villagehatshop.com/ . Buy a hat. Or ten. I do not think that they stock boaters, but if you beg them they may dust one off for you. You cannot have mine. I'm getting older myself. Soon my friends, my boater will significantly add to my social agenda.

I am going to put down a romantic's bet on this hat issue. I think that dress hats for men who are not in show business or in uniform are back. I will wear a dress hat. As soon as you do.
Posted by M.Lane at 2:34 PM

My husband wears hats and gets compliments on them ALL the time. My daughter and I picked them out as gifts for him at his request. He has some straw summer hats and a wool fedora for winter. I think hats are way cool, and I'm no octo-genarian. You should definitely get one.

I think hats are smart and sophisticated!

I wear hats very frequently. A summer Panama, winter its mostly an Irish walking hat or flat cap or even a deerstalker. When dressed up a bowler.

As my hair gets thinner a hat keeps the nob from burnign or freezing. I think it looks good too.