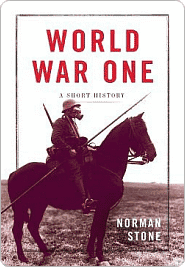 All gourmands know it. Sometimes you are in need of a true feast. The twelve course chef's menu. With a couple of fine bottles of wine. Other times, nothing but a plate of steak frites and a carafe of vin rouge will do. There are several fine extended histories of World War One. Twelve course feasts for the true enthusiast of the period. Recently, however, I was given a one course delight on the subject.

It should be plain by now to the return reader that I am quite interested in history in general and in World War I in particular. There is such a superior body of literature surrounding the tragic events of 1914-1918, both fictional and historic, that the reading person cannot ignore the period. Add to the mix the fact that the "resolution" of the First World War set in inexorable motion the forces that lead to the Second World War and to many of today's problems in the Middle East and Central Europe, and a good volume or two on the clash should be required reading.


Sadly, the topic of the First World War is merely a footnote in most American primary educational curricula and few people really know much about it. This may not be limited to our shores. Robert McCrum noted in The Observer a few years back that the new generation finds the First World War almost as remote as The Iliad. An interested person seeking to begin learning about this vital and interesting era often finds their efforts impeded by the fact that war histories in general tend to be thick tomes overburdened with troop movement maps and tactical theorizing by armchair generals. Fine for the amateur tactician but rather heavy food for a person who has interest in, but not passion for, the history of a particular conflict. Another obstacle is the pace of modern life, which lends itself more to endless dashing about than to sitting still reading, particularly when some degree of thoughtfulness is required by the subject matter.


Arriving to solve all of these dilemmas is World War One, a slender and elegant retelling of the conflict by the noted historian Norman Stone. In 186 pages, Stone manages to provide a superbly readable short study of the war, from its prelude in the rise of great European empires and modern notions of nationalism to its epitaph which endures today across the globe. That Stone can accomplish this task in so few pages is a testament to his mastery of the subject matter.

A few appetizers are in order to whet the literary appetite. Regarding the society which immediately preceded the war, Stone states:

In 1900 the West, or, more accurately, the North-West, appeared to have all the trumps, to have discovered some end-of-history formula. It produced one technological marvel after another, and the generation of the 1850s--which accounted for most of the generals of the First World War--experienced the greatest "quantum leap" in all history, starting out with horses and carts and ending, around 1900, with telephones, aircraft, motor-cars. Other civilizations had reached a dead end, and much of the world had been taken over by empires of the West.

If one finds this paragraph disturbingly familiar, one should read more about World War One. Immediately. Stone describes most key events of the war in a fashion certain to satisfy the interest of the historically curious, and even more certain to whet the appetite of the reader for more in-depth knowledge of this tragic time.

The book ends with reference to Hitler's Mein Kampf and its encapsulation of the fears expressed by Lloyd George years before...

...in twenty years' time the Germans would say what Carthage had said about the First Punic War, namely that they had made this mistake and that mistake, and by better preparation and organization they would be able to bring about victory next time.

The cessation of hostility in 1918 lasted all of twenty-one years.

Some tend to consider short histories no more than shallow treatments which at best ill-inform and at worst misinform the consumer. In reply to this notion, I refer the reader, again, to cookery. A sauce which is diminished in volume after application of heat is not called a minimization but, rather, a reduction. Rendered more potent and rich by the effort. So too, World War One is a master's reduction of a heart breaking and complex time which leaves the consumer hungering for more knowledge. The stimulative effect of this fine book upon the intellectual appetite is perhaps its greatest facet.
Posted by M.Lane at 3:21 AM

Great post...and this is nowm in my "on deck circle" for reading. I am a fan of "Guns of August" for a WWI history and the recent work: The Somme is very god as well.

Thank you for this great post. I too am a huge fan of "The Guns of August" and understand the histroy that led up to the war, but my overall knowledge of the Great War is very limited.

In defense of the younger generation when we were young the War of Northern Aggression was 100 years old. Now WWI is 100 years old so it does seem like ancient history to them. Still sad to see that civilization never seems to look to the past for answers.

"Sadly, the topic of the First World War is merely a footnote in most American primary educational curricula and few people really know much about it." This applies to me, and I was a history major. AND I read Barbara Tuchman's The Guns of August.

This will be the second book I read on WWI. Thanks for the recommendation!

Great post, as always, Mr. Lane. A few months ago I picked up "World War One British Poets - Brooke, Owen, Sassoon, Rosenberg and Others". It doesn't cover the scope and breadth of a history book, but I'd love to re-read it in tandem with your recommendation.

Very good post. I will read this book before I read "The Peace to End All Peace".

On an unrelated note, I was in Kansas City this weekend and stayed at the President. My wife and I went to the Billy Joel-Elton John show and then capped it off with some after-show drinks in the Drum Room. The jazz in the Drum Room was amazingly good. It was probably the highlight of the night. Not sure if that's an indictment of Billy Joel-Elton John, or a high compliment of the jazz...

Excellent. I shall add it to my wanted reading list, which as it stands is now at nearly 74,000 pages.

Wonderful note on the quality of teaching given to this subject matter as it is quite lacking. I think the only war that gets less coverage in our history classes is Vietnam. When I was a lad, though, we did seem to find weeks to spend on the pilgrims. Go figure.

I will be sure to look for this book! When I was younger, I devoured history, but it's rather a rare treat now. However, over the holidays, i enjoyed Gilded Youth by Kate Cambor, a Tale of Three lives before the War.

This sounds like an excellent read and one that I would love...Thank you for mentioning this book, it is due time that I got back to my first love ...history, xv.

MLS and BDV, this book would be great to read right along with GOA.

James, we agree completely. Santayana said "those who cannot remember the past are condemned to repeat it". What about those who never knew anything about the past?

Ben, see above. Tuchman is great.

Mrs. Scoffs, I do so love your comments! I have the little poets book also. It is so majestic and sad. Can't beat Rupert Brooke: "If I should die, think only this of me..." my vote for greatest line ever penned in war time.

LT, Fantastic! I so miss the Drum Room when I am not there. The sign of a great joint. Also, the WWI museum in KC is just amazing, and the only one of its kind in North America.

Turling, yes those zany pilgrims. Isn't most of what we were taught about them a myth?