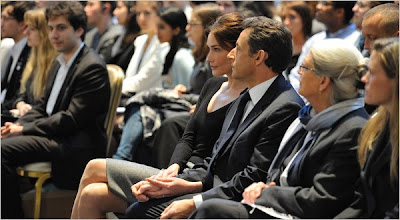 As reported in the New York Times Friday morning, the Twitter-fueled controversy in France regarding alleged infidelities of both Mr. and Mrs. Sarkozy has been raging on. It is time to come clean. It is true. Carla and I have been running around for years. It is not her fault. She really could not help herself once she started reading The Epic. And, well, met me of course.

As for Mr. S, all I can offer is a Parisian shrug of the shoulders and a bland c'est la vie. How could she stay with you after meeting a 51 year old, slightly out of shape, itinerant storyteller? You never had a chance. Despite your powerful job, your really great clothes and the fact that your hair is a lot better than mine. Even your ability to get a dinner reservation absolutely anywhere didn't help you. After all, and as you well knew, one of her recent albums was titled... 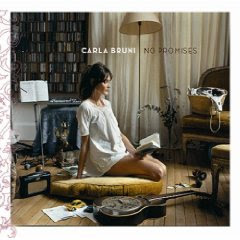 Now that this rumor has been, um, put to bed, the Twitters and the press can take a day off to gather their collective strength before once again beginning the relentless search for truth and real news. Mr. S, soldier on as best you can. She is still married to you. In name anyhow.
Photo Credit: New York Times 4/9/10.
Personal Security Note: Before this post gets picked up by some British tabloid as "confirmation" of what they have been running about Mr. and Mrs. S, and before Mr. S turns the guns of the French Secret Service on me, let me say that all of the above is satire, as will be apparent to return readers. I do admire her though. Perhaps not as much as the fellow goggling at her legs in the photo from the NYT, above, whose place has probably already been ransacked by the FSS.
Posted by M.Lane at 5:13 AM

HA...so you were the other man with La Bruni! I'm hardly surprised as American men totally have it over French guys!

My, that Carla has better taste than I thought!

Bet the Irish Redhead could kick her ass, though.

Belle, we have that going for us anyhow...

Cashmere, thanks! And, yes, without question. IR a 10-1 favorite.

From such dreams are made.

I certainly could understand Ms.
Bruni's attraction to THE EPIC, especially after reading his
April 5 post ..."tangelocity of
inanimate rope-like objects" --
Love conquers all.
BarbaraG