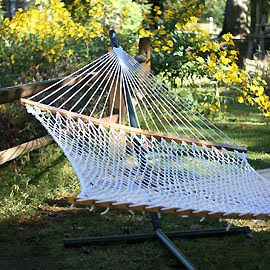 I've been ill for about two weeks, but am now on the mend. My wife maintained that I had swine flu as retribution for my refusal to have the shot for it. In any event, whatever it was flattened me but good.
One positive thing about falling ill during the Southern Spring is that the days are perfect for recuperation in a hammock. Just the perfect place to be in the very short time between when it is too cool to lie out and when the mosquitoes make it impossible.
Any hammock will do but an old one is best. The rope has a certain smell that is redolent of good memories. Memories of carefree summers spent by a lake, lolling over the green grass. Until father called for yard work assistance, anyway. The good hammocks come with a canvas covered pillow which is more or less weatherproof. It has a great scent also, reminding the recliner of small wooden sailboats with canvas sails. Or, if you were like me, of the canvas flotation cushions your dad would put on the seats of the rowboat he would use to take you fishing.
You do not need much gear to have a fully acceptable hammock experience. Birds chirping. Sun slanting across the tree branches overhead. A good travelogue or food book is perfect. My companion for hammocking this past week has been Feasts of a Militant Gastronome, by Robert Courtine. Courtine's rendition of his greatest meals is perfect to keep the hammockite interested long enough to fade blissfully into the dozing state. If one were not ill, a nice beer such as a lemon flavored shandy would be a useful accessory... 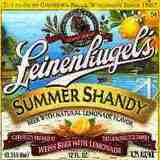 Perhaps a couple of bottles. And a very small plate of summer sausage and sliced cheese. If one were not ill, that is.
There is nothing bad about a hammock, even taking into account the enhanced difficulty a person over fifty has in entering and exiting one. But as David Niven noted in his marvelous book The Moon's A Balloon, there is an old proverb that says when the soft breezes blow and the sun is warmest on your back, the breezes are planting the seeds of weeds into your garden. In my case, the seeds of weeds took the form of a nine pound Papillion dog, shown here in his normal state of repose... 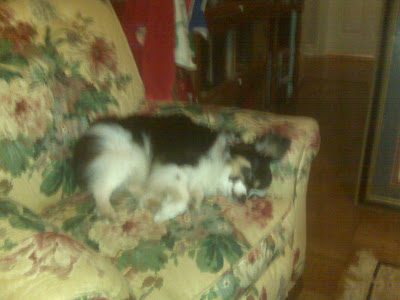 Imagine my state of bliss. In my old hammock, Courtine lying open on my stomach, dozing away in the glory of an American Southern spring afternoon. Birds chirping, no doubt. Even without shandy and sausage, an agreeable scene. Apparently rather agreeable, even inviting, to the casually wandering Papillion nearby. Now, Papillions are wonderful companions. They crave company and brim with self confidence. They are very nimble. They think they can jump anywhere and hit the target. I think this is true if our Papillion Grammy is any indication. He, who, without even the decency of a small yip, launched himself into the suspended net which was already filled to overflow with well padded, sleeping Epic.
I am here to tell you that it is not easy to maintain the somewhat delicate balance required to stay in a hammock when a flying toy breed skids to a landing on your stomach. The arms and legs tend to flail. The head snaps up to unsightly angles. Books fly. Shandy [if any were present] spills. Sausage and cheese [ditto] flies about. I am pleased to report that, even in my diminished state, I managed to remain in the hammock. With dog intact. I suspect that I could have had some form of a career as a circus act.
Despite being ill, I cherish my chance at a hammock afternoon. And the Epic gift of appreciation it brought to me. For a place to have a hammock. For the pretty sky and sunlight and trees. For a goofy little dog. But I will say this. If anyone sees me at the beach this summer [an unlikely event, I promise], those aren't four small paw tattoos on my stomach. They are just bruises.
Posted by M.Lane at 9:46 AM

Excellent. Also, sounds like a perfect Father's Day, when that rolls around. I am glad to hear you are feeling better. Something is going around this spring, as our two year old was sick the week we were in Hawaii. I know a hammock would have made her feel better, as well.

I definitely need to add the hammock to the new garden...when/if it's ever completed.

I haven't had a hammock since my D.C. days, and that's too long. What a great notion you've given me. Now to figure out where to put one at my place.

M Lane, glad you feel enough to return to the blogosphere. Our pets, like the sun, makes us smile.
I'm glad you're feeling better.
Illness has kept you swingin' every so gently on your hammock.
Your dog is so cute.
Best wishes,
BarG

The only hammock that I would want to take a nap on would be one under a palapa on a mexican beach...with no dogs in the vicinity!

We have the rope hammock but no place big enough to put it so it spends most of its time rolled up in the garage.
I recommend Lienies Sunset Wheat.

Get well and according to me and Bill Blass - no dog should be smaller than a cat.

I love the thought of the hammock and in my life that is all it is! We do have one in the garden but somehow I never manage to make it there or if I do think of it someone else has got there before me. Hope you are feeling better....and you made the right decision, don't have the jab! xv