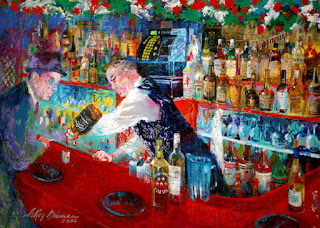 LeRoy Neiman passed away yesterday at age 91.  It should be no surprise to any return reader that [as with wine, food, spirits, etc.] I love art but I know almost nothing about it.  I loved a lot of Neiman's work and I am truly sorry he will not be painting any longer.

My first bottle of Bordeaux and my acquaintence with the only gallery art dealer and the only U.S. Open golf champion I have ever met are all due to LeRoy Neiman.

On my very first trip to New Orleans, in 1984, I found myself with a day to kill.  It should also be no surprise to the return reader that ML, left to his own devices in a new town, especially New Orleans, might come to no good ends. After a marvelous, long, lunch [with appropriate libation] at Mr. B's on Royal Street, I strolled out into a warm early summer afternoon in an artistic and adventurous frame of mind.  As I wandered down Royal, I came upon a gallery that displayed several of Mr. Neiman's works.  I had never been in an art gallery before.  I went in, under the influence of my marvelous, long, lunch [with appropriate libation].  There was nobody else in the gallery at that hour.  As I was gazing at one of the Neiman paintings, a very pleasant female voice asked me if I were a Neiman collector.

I turned to find myself looking into a strikingly pretty face.  With a question pending, I ask, what would any young man in my position have done?  At some point I recovered my ability to speak and replied that I was a collector "in a small way" [I did have one Neiman poster at that point, purchased for $25.00 from a joint in Pittsburgh] and that my "main interest" was his original sketches.  True.  I had just not ever thought of it before.  Since there was nobody else in the gallery, I was then treated to about an hour tour of their collection of [very expensive] Neiman work.  I admit that, other than remembering that it would take the better part of my year's salary to buy anything, I am a little foggy on the details of the art we looked over.  I do remember clearly that her hair was just to the base of her neck and that it was a dark chestnut color. She gave me her card and then we parted company.  At which time I was more than ready for my first, long, marvelous, New Orleans dinner at Antoine's.  With appropriate libation, of course.  I had my first Bordeaux that evening.  A Clos De l'Oratoire.  Appropos, and still one of my favorites. 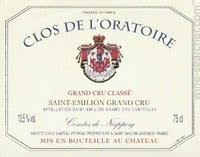 A blink of an eye and it was 1987, four years into a fledgling law career.  My firm was having an open house at which the golf champion was a guest.  I was in need of a nice [but inexpensive] piece of art for my office wall and I decided to recycle the Pittsburgh joint's Neiman poster for the purpose. The fancy wooden frame cost a lot more than the poster, even though my brother and I built it ourselves at a shop.

During the reception in question, I wandered down the hallway and heard voices coming from my office at which time I saw my senior partner and the champion peering at my Neiman poster. All $25.00 of it.  I was introduced.  As a life-long golfer and the son of a golf professional, I was pretty much taken aback to make the famous man's acquaintance.  He was very cordial and told me he loved Neiman's work too.  Had a collection of first generation lithos and signed originals in fact.  He inquired if I were also a collector.  I hesitated a moment and said that due to the early stages of my career, I had to limit myself to a large Neiman or two and some of his original sketches.  The champ was impressed and asked for the name of my art broker.  At this point, I saw my senior partner looking at me with what could only be described as a cagey look.  Senior law partners are good at such things. I think he suspected that I was fictionalizing in order to sustain the conversation.   Imagine, then, his surprise when I provided the name and phone number of a striking young woman dealer at a very chic gallery on Royal Street in New Orleans.  The champ, momentarily impressed, took my card with the information and was herded off to meet other people at the party.
I had a call from her some time later thanking me for sending "a very good new client" her way.

As I sat in my office this morning, a quarter century later, I saw LeRoy Neiman's obituary then I looked at my framed Neiman poster.  The same one.  I thought of all that it, and I, had seen. I gave Mr. Neiman and his art a toast.  After all, it was the very least that I could do.
Posted by M.Lane at 9:15 AM

Loved LeRoy's works too. It's rare for an artist to attain good notoriety while still alive, but Nieman's art was readily digestible to the art snobs and the unwashed masses. He was a true original and will be missed.

Pillar, thanks for the comment and visit! I agree with you completely.