Just A Little Pinch Of Soda 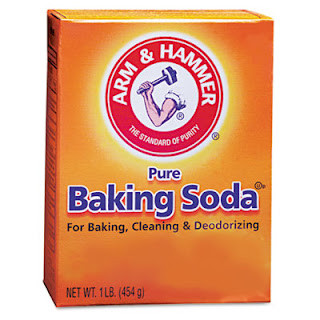 Last weekend was very busy. The typical "too many things, too little time" scenario. At one point when I was particularly tired, the Future Rock Star [now 15] and I had to drive to the grocery store.

After making our purchases, we got back in the car in the growing dusk and.....nothing....that dull awful clicking noise a car makes when you turn the key and no juice is flowing to the starter.  The thing had worked perfectly for months until that very moment. This is what I LOVE about mechanical things.

I, however, am not mechanical. I just have no talent for fixing things. I have written of this before.  My son is more than aware of this. As I stared furious at the ignition key and cursed how we were going to have to call a wrecker or something, I had an odd memory.

When I was 18 and headed off to college, my grandfather came out the morning I was leaving and handed me a canvas bag with some of his tools in it. Just in case I needed to fix anything on my car while I was gone. I was so touched that he would take the time to select some of his life-long collection of tools to give to me, and even more touched that he actually thought that, somewhere inside me, there lurked the ability [albeit very latent] to actually fix a car.  My Dad, knowing better, told me that "just in case" I couldn't figure out what tools to use if the car wouldn't start that the first thing to do was to check the battery terminals for corrosion.  He reminded me that he had showed me some time before how to remove the battery terminal cable and mix baking soda with water to nullify corrosion of this sort. My mind full of college life to come, I nodded and went on my way.

I used this tip many times afterward, but I had not thought of it in a long time before last weekend.  As I sat fuming in the car, I had a vivid recollection of my Dad and Grandpa telling me about battery terminals.  Handing me tools that I never really learned how to use properly. The baking soda. I turned my gaze to the supermarket beside me.  Told my [now monumentally bored son] I would return in a minute.

Which I did. Armed with a little scrub brush, a box of soda, and a bottle of water.  When I told my son we were going to open the hood of the truck, incredulity was perhaps an understatement of his response.  Sure enough, when we did, we saw that the positive terminal was covered in corrosive residue. We didn't have a wrench [my grandpas tools are now resident in my garage in a special place] but I showed the FRS how to apply the water and soda, causing tremendous foaming, and how to brush the crud away, rinsing carefully afterward. All well and good. But the car wasn't running. We just had a clean battery terminal.

We returned to the car. We both stared at the ignition.  Cranked it.  Started like a champ. Which earned me my first son-generated fist bump in quite some time. I was thrilled that this simple thing had worked. That my son could see I could actually DO something [other than just earn money to pay for things] That he was proud of me. And, best of all, that I had been a direct link between my Grandpa and Dad and my son in this small way.

At home, I poured a Scotch on the rocks.  Thought about it. Then, as Sammy Davis, Jr. once said, applied just a little pinch of [liquid] soda.  It had turned out a great weekend, after all.

Well done, young man. I would have had the engine out and disassembled in the parking lot into several thousand pieces I never would have been able to put back together. Yea, I'm that guy.

That's just beautiful. Isn't one of life's greatest pleasures when we, all too seldom, discover we still have the ability to impress our children.

BB, Good to see a comment! It doesnt happen much.