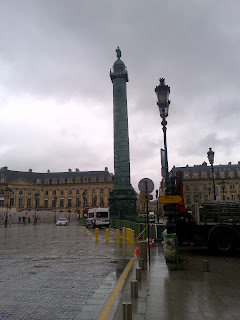 When I arrived at the Place Vendome, I took this photo.  During a break from the downpour.  The Ritz Hotel is to the left in the photo. It had an ominous looking construction cover over part of it's exterior facade.  I was en route to the fabled Hemingway Bar, to drink the most expensive cocktail in the world. The most expensive REGULAR cocktail I mean. No gold dipped olives or ancient cognac additives. No souvenir glasses. Just a regular old Martini or Manhattan or Sidecar.  Perfectly made and served in historic surroundings. In a room visited by [rich] writers, potentates, oligarchs, movie stars and the occasional Epic on holiday. And more expensive than anywhere else. I had read a blog before I left for Paris that detailed a perfect Sidecar consumed at the Hemingway Bar and which had concluded that one was enough because it was the most expensive drink that travelling drinker had ever seen. Thus, I decided to dub it TMECITW.

It should surprise no one that TMECITW is found at the Place Vendome.  This has to be one of the most expensive shopping areas anywhere.  I found myself waking by the famous men's clothier Charvet.  Where I stared into the beautifully arranged windows.  At $500 shirts. $200 pocket squares. I would love a set of Charvet silk pajamas some day. But I don't want to trade part of a return trip to Paris to get them!

I decided to go down scale and procure a Parisian scarf from a cheap shop.  Everyone in Paris wears a scarf.  I am not sure what the reason for this is, but I found it to be a dashing and romantic thing. The ubiquity of the Parisian scarf during my trip could have easily been explained by the sub-50 degree weather and rain. In any event, not procuring and wearing a scarf while in Paris would be the same as going to Pamplona to run the bulls and not wearing a red sash.

To this end, I retreated briefly from the luxury of the Place Vendome back to the galleries along the Rue de Rivoli where souvenirs and cheap scarfs abound.  After a few minutes looking through the scarf wracks of various vendors, I picked the black and white number shown here... 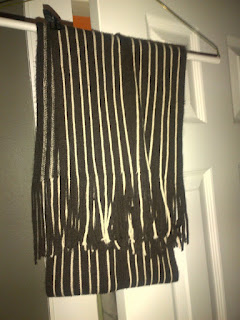 Long, soft and, in 100% glorious man-made fiber, at least a little water resistant.  All of this for a modest five Euros.  Just the thing for the solo flaneur out in Paris for the first time.

Then there came the issue of tying my scarf.  There are probably entire blogs devoted to the topic. When you become scarf-aware, you see that there are as many ways of tying a Parisian scarf as there are scarfs to begin with. There seems to be no wrong way to do it.  It is a pure expression of what P.G. Wodehouse called "the psychology of the individual".  I drape-flopped my scarf about my neck and strode back toward the Place Vendome and TMECITW.  I found it easy to stride about when decked out in a cool scarf.

One problem then presented itself.  My phone told me that the Hemingway Bar did not open until five in the afternoon.  Very proper, but when I learned this I had two and a half hours to go.  And I was (despite my scarf and LL Bean jacket) in extreme need of hot food and a drink. Or two.

I decided to pop into the Place Vendome Geurlain store.  Many years ago, I bought a bottle of Geurlain Coriolan cologne and it immediately became a favorite.  Of course, it fell out of production and I could not replace it when it ran out.  One of the treats I planned for myself in Paris was a visit to the Geurlain store to try and buy Coriolan.  I pushed the heavy door open and escaped momentarily from the rain.

Inside the store, I was pleasantly greeted by two very pretty young clerks in little black dresses.  For some reason, I was unable to conjure up any French so I stammered in English what I was looking for. One of the clerks looked mystified and replied that she had never heard of Corolian before.  Obviously due to a gap in corporate new clerk training.  One would think that in Paris the clerks at such a store would be fully versed in the historical fragrance catalog.  Luckily, the other clerk did remember Corolian and said that although they no longer sold it under that name "the same fragrance" was available under another name.  I admit that at this point I gave her a fishy look. When she produced a (very large) bottle of cologne, however, and let me smell it, I had to admit that it was just the same as my long-vanished favorite. Delighted, I was ready to purchase the bottle so I inquired as to the price.

I have long ago overcome my reticence at asking how much things cost in fancy boutiques.  It must be the result of that time in New York when I was in Dior and, picking an innocuous looking item off a display rack was mortified to discover that the contraption was so daintily balanced that the whole thing fell crashing to the floor.  A clerk flew to my side and scoldingly told me "THAT is a five THOUSAND dollar display".  As if I had made the deranged thing.  At this, I was unable to resist quoting the great criminologist Clouseau when I replied "not any more". I laughed, anyhow.

In the event, the chic young lady in the little black dress quoted me a price for this bottle (named L'Ame d'un Heros according to basenotes.net.) which actually made me blink.  And I am not a man who just blinks at random in reply to a statement, I can assure you.  I rapidly added the thirty percent exchange "bonus" from Dollars to Euros, and then asked if they had a smaller bottle.  Alas, no.  The two young women looked at me like an oddity.  They were apparently not used to men desiring smaller things. No Corolian pour moi.

All of which put me even more in the mood for a cocktail.  I was still almost two hours away from happy hour at the Hemingway Bar.  What was the thirsty Epic to do?  Why, change course for another legendary watering hole, of course!  I was only a short walk away from Harry's New York Bar. At "SANK ROO DOE NOO", an address that it is said every cabbie in Paris knew phonetically.  As I turned the corner onto the Rue Daunau, the sun broke through the clouds and the rain stopped. Really. A good omen if ever there was one.  I beheld the legendary door... 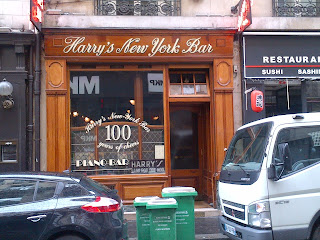 Inside, I immediately knew this was a Great Bar and my kind of place.  They have old college pennants all over the walls, and I found BOTH of my schools represented. An historic, small, private school in Virginia is one thing, but a Florida State pennant? Perfect... 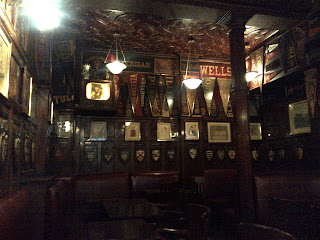 At the bar were four British men trying to work their way through the extensive selection of obscure Scotch.  Next to them was a lovely Southern Belle of a certain age reading a novel when she was not debating the virtues of Kentucky Bourbon over Scotch.  Perfect people for a bar.  I suddenly wondered if I had been hit by a bus exiting Guerlain and suddenly transported to a Better Place.  The barman/waiter Rene' looked like a 1920's movie character when he came to my small booth and asked pleasantly for my order.  I decided to have a Sidecar.  Powerful, but not overwhelming. Brandy, Cointreau and lemon juice, shaken together.  Just the elixir to fight the damp chill.  I asked if they had any food at that time of day, and Rene' replied "awtdawgs monsieur".  Eh?  OH, "hot dogs"!  I could not resist.  And it was all they had.  One Sidecar.  One "awtdawg" coming right up... 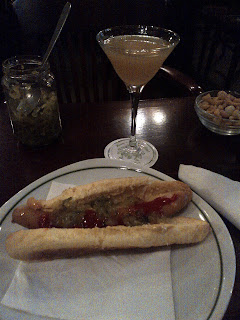 Again, perfect.  The drink was superb.  And I don't know who makes these hot dogs, but they are marvelous.  Based upon the name of the joint, I strongly suspect they derive from New York.  Anyhow, a fine, large sized dog with just the right amount of "bite".  And all the classic fixings, just like home.  I had another Sidecar to celebrate.  And another dog.

I realized that it was fast coming upon the opening time for the Hemingway Bar so I trundled out of Harry's fully fortified.  Sights set on the Ritz Hotel.  Prepared for a Sidecar Challenge.
Posted by M.Lane at 12:32 PM

hey i love your blog. you have a great voice. i found you googling "cheap scarves paris" i will now make sure the husband and i hit harry's bar. thanks! cheers

hey i love your blog! you have a great voice. i found you googling "cheap scarves paris" thanks to this post i will make sure i hit up harry's bar.cheers

Hi Sarah! Thanks for the comment and I hope you return to The Epic soon.

I can't wait to learn whether or not you took your husband to Harrys...