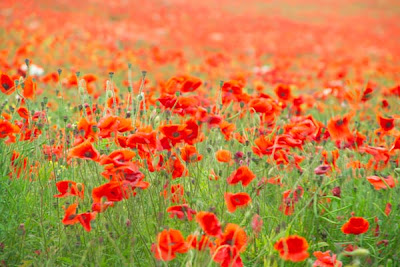 Armistice Day. That is what they used to call it. In honor of the moment. The final moment of the final war. The greatest bloodletting in the history of the globe. Up to that time. World War I did not create a "great generation" as some have said of World War II. It destroyed one. Sir George Clausen painted "Youth Mourning" in 1916 to symbolize generally a generation's loss. And to symbolize specifically the death in battle of his daughter's fiancee: 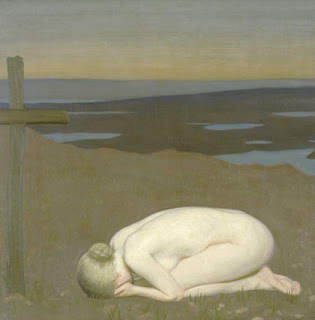 November 11, 1918. 11:11 in the morning. Bullets stopped. Cheering began. Tears too. Of thankfulness. Shock. Tension release. And bitter loss. Eleven thousand Allied troops died on November 11, 1918 before 11:11 in the morning. More casualties than in the invasion of Normandy on D-Day, twenty-six years later. There is no better symbol for World War I than that stark statistic.
Afterward, people took to wearing bright red poppies in their lapels to let the world know they would not forget. When I was a boy, the old men from '18 formed up with their brothers from '45 and moved as best they could about our town, handing out poppies and taking donations. Everyone wore one. After a time the formations dwindled. People forgot the First World War. And the poppies. The poppy field shown above is in Flanders. Which for the several years before Armistice Day looked like this: 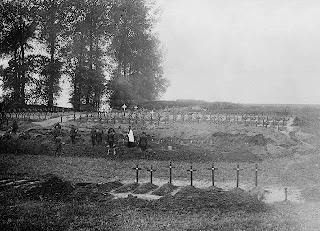 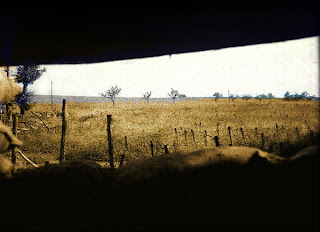 The use of the poppy was inspired by the poem "In Flanders' Fields" by Canadian physician Lt. Col. John McCrae. Perhaps the most famous of the many poems of the era. All but forgotten now. Of course. High time we all remembered again...

If you look very, very hard, you can find that some good things came even from this era. Stirring poetry. Great novels. And the escapism of a young British communications officer stationed in this trench system: 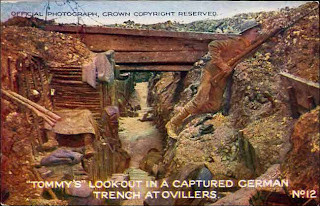 So horrified at what he saw each day that in every spare moment he wrote down elaborate fantasy stories. That one day charmed the world. The officer's name was J.R.R. Tolkien. 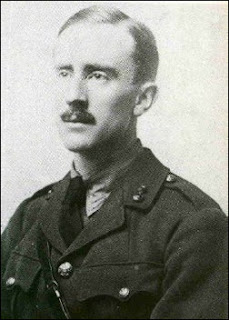 Tolkien.
A dear friend of mine has a wedding anniversary today. Chosen with clear design. Not as a cynical indication of the cessation of hostilities. Rather, I imagine, as symbolic of the perfect moment. When peace reigned. And hope and promise glowed most brightly. I think that 11:11 a.m. on November 11 is the perfect time to marry. Even if you are not interested in history in the least.
In the New York Times for November 12, 2007, Richard Rubin wrote a marvelous piece titled "Over There--And Gone Forever". About Frank Buckles, the 107 year old man who is probably the last surviving American veteran of World War I. The article noted that neither the Department of Veterans' Affairs, the American Legion, nor the VFW have any idea how many American First World War veterans there even are, much less where they might be or whether they are alive. They received no Veterans' benefits. No job preferments or college education for their service. A few parades. One hundred thousand of them left home, only to remain in Flanders' or other fields. Mr. Rubin concluded the article by saying that with the passing of the last veteran of World War I, that era will become the sort of history we cannot touch anymore, lying just beyond our grasp. I hope we don't ever lose track of World War I, or the incredible people from the toddling world power called America who went "over there", to fight and die. For countries they barely knew existed. For reasons that historians cannot fully grasp. Even now.
In 1954, someone got the idea that "Armistice Day" should be changed to "Veterans' Day". Because it turned out that so many wars came along after the final one. The moment on November 11, 1918 that was supposed to conclude war turned out to be just that. A moment.
I saw a marvelous thing this summer. A wooden cart full of red paper poppies. Just the sort we all wore when I was small. I will be wearing one today. How about you? 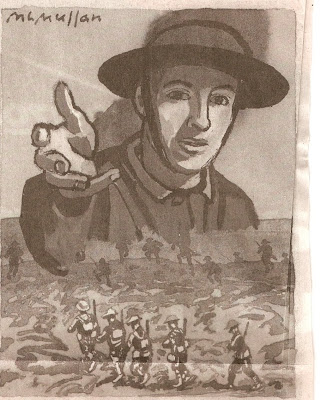 As a kid, I always gave a donation and got my poppy to stick through a buttonhole. But I was always within walking distance of an Army Post. I can't begin to think where I could find one now. I haven't seen a red paper poppy since I moved to Richmond. Perhaps at the War Memorial?

But I read "In Flanders Field" every year and send the veterans I know a note of thanks.

While I only read one newspaper in the mornings myself, I saw on Morning Joe, that not a single major newspaper had anything at all on its front page regarding Veteran's Day. A bit of a shame, wouldn't you agree?

Easy, I was thrilled to find them. At the WWI museum in Kansas City. I read that there is no WWI monument in Washington DC. The only war without one. I HOPE that is not true.

Belle, I think he is wrong. The NYT had a segment this morning that lead to a comment piece by a British historian called "A Holiday to End All Wars" which was classic. Not a headline, but something anyhow.

Thanks for your visits!
ML

Hmmm. I remember a statue of a flaming sword that I thought was a WWI monument. I'd be shocked. It took too long to erect a WWII monument, though.

I had no idea...a great post with some human insight. Still, I asked my career Army father many years ago why men kept going to war and he said, "Because we like it."

Why don't we sport poppies in the USA?

We really should. Let us all agree to transport the venerable tradition to these shores, begining next year.

Mark your calendars now and bug your florist.

Tintin, you don't need a sociologist when you have input from a pro do you?

Matt, GREAT idea. I feel a manifesto coming on...

Amy thanks for the visit and the compliment!!! I'll try hard to earn your visits, all of you.

Thank you for writing all of that.
Thank you for the photos, especially the painting of the grief paralyzed woman. Stunning. Armistice Day it always is for me - no pomp nor pretense. Merely a cessation of violence.

HW, thank you very much. Your comment means the world to me. And, thanks for your visit! I'll work hard to earn your return visits.