Back In The Mooklife Again 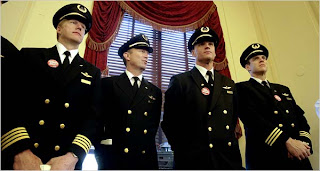 Saturday night. In the Atlanta airport. Crown Room Club [thank Goodness]. En route home from Las Vegas. About which I will write much more later. It is late. But not as late as it feels just now. Made to feel even later by the fact that some guy in the next cubicle is, as I write, playing "I Got You Babe" by Sonny and Cher off his laptop. Loudly. I am NOT kidding. Trust me, it is VERY hard to work under these conditions.

But that is not why I write. It struck me on the way to the Crown Room Club how great Delta pilot uniforms look. Navy blue. Just enough gold. Caps. As it should be. Observe the photo from airlinepilotforums.com above. Respectable. Confident. Flight worthy. Combat tested. What you want in your pilots.
A convincing piece of evidence in my continuing crusade against the "office casual" movement. Call me a sartorial Don Quixote if you will, I think this is one of the great cloth-based disasters of the modern era. If not the greatest. How would you like it if your pilot showed up for work in some logo golf shirt and wrinkled khakis? Like 90 percent of workplace America? I would get right off that airplane. It may just be me. Or the bourbon talking. But I think not. The folks I am responsible for at work are attorneys. I make sure they dress like it. People pay us a lot of money for advice that most of the time is founded in art. Not science. They deserve the clothes for what they pay. It makes them feel a little more comfortable, often in very difficult circumstances. Which is also what they are paying for. I want my group to look like Denny Crane: 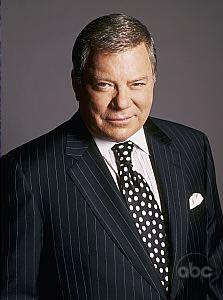 There was a best selling book when I was in college called "Dress For Success". It was founded on tests where people picked out the "most competent" and "smartest" people from photos. Guess what? None of the "wrinkled khaki" crowd got picked. Whether they could fly the damn plane or not. Just something to think about when you are getting ready for work on Monday. A thought for you sitting comfortable and at home. No doubt in front of your mid-autumn fires. From the Atlanta Crown Room Club. Too late on a Saturday night. Sonny and Cher blaring. Over and out...
Posted by M.Lane at 4:52 PM

I agree!
I have to wear scrubs to work and hate it because
I feel like I am in my pajamas. But, I walk in with a crisp white labcoat over them so at least it looks a little bit better! LOL!

The worst part is that people don't like to dress up for anything anymore. DOTR's family shows up for Thanksgiving dinner dressed in jeans and old sweatshirts or ***kill me if you ever see me buying one of these***velour sweat suits. I was looking at some wedding pictures and I asked my aunt if she could see anything wrong with them. She couldn't, but the first thing I noticed was that the bridal party and parents were wearing formal clothes and the guests were wearing khakis and sports shirts (men) and khakis and sweater sets (women).

I really don't get it. If you can't dress up for a wedding, when are you supposed to dress up?

Rant over (one of my sore spots, obviously).

Thank you for adding, "with somewhat moderated behavior" regarding resemblances to Denny Crane.

I agree with you wholeheartedly...would you like to come walk a mile in my shoes and help me encourage a few school administrators and quite a few teachers to dress professionally? And you should have seen some of the folks at church this morning!!

You inspired me. Blue suit, silver necktie, white pocket square, brown bluchers today. I was accosted on my way to my office by one of our IT staff and his ill-fitting t-shirt, slouching blue jeans and, at least, 20 year old Chuck Taylors. I gave him my best "are you serious?" look, but he was oblivious.

Thanks for all the visits and comments!

Petunia, even with the "jammies" on, the white coat goes a long way and is what the patient expects. I need that white coat when I go for a doctor visit!

MOTR, I don't get the wedding slouch at all. I just don't. And I agree, I'm not advocating foppery just dressing when you want to or when it is the right thing.

Belle, I have no suggestions about the school admins etc. My experiences there have been pretty bad overall. It always seemed to me that they figured a cord jacket with arm patches [sort of a high school teacher uniform when I grew up a la Donald Sutherland's numerous roles of that kind] was a horrid burden.

Turling! I am so proud....sounds like a GREAT outfit. Not to be too hard on the IT folks though. They operate in a vapor all of their own. AND, if I saw ours dressed up too much I would figure he had managed to hack into the bank account....

Well.. only if his rumpled khakis were accompanied by a cover with a 50-mission crush and a worn A-2. Maybe.

Last time I flew with a pilot who wore blue jeans, I discovered he didn't actually have a license. I discovered that at a bar, where he was drinking and dancing roughly 9 hours to wheels up... We left via another charter. The pilot and co-pilot both wore white shirts with rank on the epaulets and black trousers.

I slept all the way home.