Style Out Of Fashion 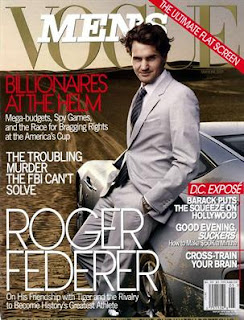 Once upon a time, "men's magazines" used to be worth reading if you were over twenty-five. Just as "gentleman's clubs" used to be clubs for gentlemen. Esquire was probably the first magazine to combine fashion, literature, travel and food in a way that provided useful information about style and an intellectual respite from the man's world on a monthly basis. Gentleman's Quarterly had more fashion but less literature. There were others, including the legendary "M".

The spirit of the true magazine for men was summarized by Hugh Hefner in his introduction to Issue One of Playboy:
Most of today's "magazines for men" spend all their time out-of-doors--thrashing through thorny thickets or splashing about in fast flowing streams. We'll be out there too, occasionally, but we don't mind telling you in advance--we plan on spending most of our time inside. We like our apartment. We enjoy mixing up cocktails and an hors d'oeuvre or two, putting a little mood music on the phonograph, and inviting in a female acquaintance for a quiet discussion on Picasso, Nietzsche, jazz, sex.
How times change. I am not sure why. Some time around 1985 or 1990 all men's publishing entered the night. And a long, dark one it was. Editors dialed the age meter of the content back to about seventeen. Tutorials on what to pack for an "across the pond" on Pan Am and how to concoct a late-night supper for two gave way to lists of the best topless bars. And catalogs of "can't miss" pickup lines. The fact that someone actually believed that there WAS such a thing as a "can't miss" pickup line summarized the entire morass. And the editorial assumption that men had abandoned the desire to live with any style at all. Or the ability to do so. Don't get me wrong, I still bought the occasional copy of Esquire or GQ. And was disappointed almost every time.
Perhaps it was the definition of male lifestyle that had changed. Perhaps I just got older. Suddenly, pages that had once held short stories by the likes of P.G. Wodehouse were bursting with freestyle mountain climbing [sans protective gear like ROPES] and nude stunt parachuting from office buildings. Now, I don't have anything against vigorous and dangerous outdoor pursuits, as long as someone else is doing them. But leave a little room for me. This did not happen. If a fellow was not committed on an average weekend to risking death shortly after an all night tequila binge and orgy precipitated by a flurry of "can't miss" pickup lines, men's publishing was oblivious to him. Us. Me. Even Playboy became boring and predictable. Well, predictable anyway.
A flicker of light appeared when I picked up my first issue of Maxim. I could not put it down. It was the most clever and funny magazine I had ever read. I eagerly watched for the following month's number. Which was singularly awful. Mystified, I closely inspected the first, magnificent copy. It was the British edition. Ours was dreck. Animal House between glossy covers.
Enter Men's Vogue in 2005. Finally, a men's magazine I could be in love with again. Although the literary element was still AWOL, at least you had to be able to read to like it. Fashion, design, art, travel. Profiles of men living lives of passion. The initial editorial introduction said that it was time for a men's magazine "that mattered". Amen, said I. In the ensuing months, I would eagerly look for each new copy and read it right through. I always learned something. And I always put it down reinvigorated. But that is all in the past. The blog Off The Cuff [listed at the right margin] posted a few days ago that Men's Vogue is soon to be retired. This horrifying news was confirmed by Jeff Bercovici of Portfolio.com. A victim of unsatisfactory circulation numbers and ad revenues. That apparently indicate that most men over age twenty-five have abandoned their interest in real style. In the unending pursuit of pretending to be seventeen. I am terribly sad. Men's Vogue, it was great while it lasted.
Requiescat in pace. 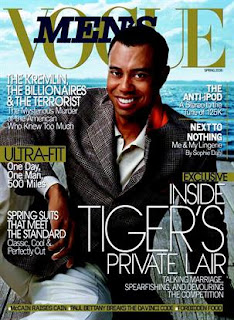 Addendum: Both the September and October issues of GQ have been very good. Perhaps there is yet some hope....ML

I've never been much for men's fashion or "style" magazines, although I will pick up Esquire on occasion if something on the cover catches my eye. I suppose that I'm not the demographic they're targeting. I did subscribe to "M" many years ago, though, and Men's Vogue showed some promise.

The only way that a spread on men's clothing will find my mailbox now is if Foreign Affairs or The Economist does a fashion issue.

LOL! If either one does do a fashion feature I suspect a centerfold will be next. Mr. Bernanke perhaps? The mind boggles...

ML - Clearly we are of the same mind. Your thoughts book end mine quite nicely and you hit a note that I was trying to find but did not articulate very well. MV is/was a magazine for adults.

Not to disparage any other menswear lifestyle mags or their readers, but MV was geared toward a reader who didn't really need a primer on pairing patterns. It was equal parts intellectual and fashion, and I guess that wasn't enough to keep it in the black. so it goes.

I, too, saw the notice on OTC. I was stunned. And still am. I just don't get it. Looking at the proliferation of blogs dedicated to men's style, gentlemanliness, etc., one would think that the topic is relevant. Especially when presented as well as it was in "Men's Vogue."

Another beacon in the darkness snuffed out.

It may be that our day is done.

Very nice post. I received Men's Vogue and GQ as gift subscriptions. I enjoyed Men's Vogue. GQ, on the other hand....

I do agree with Tucker, though. The Economist does always have a place on the coffee table. I now get my fashion fix from the blogosphere.

The owner of the Honda Passport I crashed in Georgetown, mentioned in my blog, is/was a Senior Editor of MV. Corey will land on his feet as he always does, but I'm slightly distressed to learn of its demise as you are.

At least Esquire is still around.

I would suggest that you take a look at Monocle: