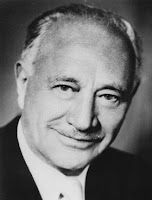 I never thought I would find myself actually plotting theft. Particularly in a hotel. In a small town in Central Florida. But there I was, on the last night of a two week trip, calculating how long a young desk clerk would look away from her station if distracted in a certain fashion so that I could sweep a bust sitting behind the counter into my carry-on. Ocean's Eleven, it wasn't. I've been diverted by busts before, but never committed a crime for one. Then again, this was no ordinary bust. It was a Connie.

The experienced Epic business traveler knows that sanity on the road depends upon the presence of a few essentials. A local hangout. A touch of home. A small personal luxury item or two. A vintage travel cocktail set doesn't hurt. Leisure time that allows the weary traveler to detach from the workaday world is probably the most important thing of all.

For some, leisure time while traveling involves a good stout workout. Not me. I like my taste of daily exercise, but for real relaxation I prefer a lounge with soft music and a good martini. Or two. Sometimes, I just like to flop on the hotel bed with a good book. When I'm in a flopping and reading mood. On the Connie-swiping trip, I was aimlessly looking about the hotel room pondering something to do when I found a book that had been left there. Way back in the nightstand drawer. A core principle of the Epic traveler is that you make your own fun out of the raw materials made available to you. I propped up my pillows and opened the cover.

What I found was a classic American movie script of a book. A fascinating story of a fellow who dreamed of doing what had never been done before. Let his dream become his passion. Worked like crazy. Sacrificed a lot. Made extraordinary friends. Made his dream a reality. Lost everything. Prayed hard. Worked harder. Became world famous and married a movie star. Built a mansion in Beverly Hills. Never looked back.

The book is titled "Be My Guest". The fellow's name was Conrad Hilton. A really extraordinary man. A man that dreamed his dream, kept the faith, believed in himself, stayed true to his friends. Who lost everything material but never lost anything spiritual. Who won the race.

There is a difference between being stone broke and being stone broke and having everyone know about it. Hilton built a hotel empire, then lost it during the Depression. Everyone knew. Some, of course, said they always knew he would fail. During the whole ordeal, Hilton kept a photo of the finest hotel in America pinned to the wall beside his desk, vowing that he would someday own it. His belief, his dream and his charisma were so strong that people flocked to his aid. A gas station attendant revealed that he was paying for Hilton's fill-ups for a month out of his own pocket because his boss had refused credit. A bellman at one of his last remaining hotels gave Hilton the three hundred dollar total of his life savings. So Conrad Hilton could have "eating money". Both men were very well taken care of when Hilton got back on his feet. A rhetorical question. How many modern CEOs would receive that sort of devotion? I bet that the answer is none. But then, I don't have an MBA. What do I know?

What I know is that after losing an empire, Hilton rebounded stronger than ever, eclipsing his former successes. Bought the hotel in the yellowing photograph by his desk but kept its name intact. The Waldorf-Astoria.

Forget all the nattering nabobs of modern business. Read "Be My Guest" and learn what it really takes to be a success. Even if you never make a dime. Notions like style. Loyalty. Keeping your word. Looking after people. Never quitting. Being honest to and about yourself. Being bigger than the moment.

If you do not read any other part of the book, read the final chapter in which Hilton sets out his principles for success. Not in business. In life. In case you are very lazy, I will set them out for you here:

5. Don't let possessions own you.

8. Look down on nobody and up when you can.

Somehow, I don't think that any of Hilton's extant relatives have ever read any of this. Pity. I have these principles written on slips of paper that I put in all my luggage, scatter into my books, place anywhere I can be reminded of them on a regular basis. Goodness knows what the TSA folks think at airports when they see them fluttering out of my suitcase.

I was so taken with Conrad Hilton after reading "Be My Guest" that, over the following days at the hotel I became obsessed with procuring the bust of him in the lobby. I never really intended to purloin it but it made a good running joke with the desk clerk when I returned each evening. What I wanted was to put the bust in my office as an inspiration. And as a reminder. Of a life very well lived. Dream big. Think big. Act big. Be big. Indeed. If anyone knows where I can legally procure a bust of Conrad Hilton, you know where to find me. 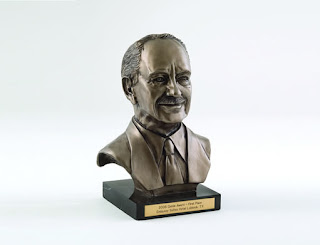 ooh--I love biographies! this sounds like a good one!

It is! They used to have free copies in all Hilton hotels. Or, you can pick one up pretty cheaply on ebay.

I am so thrilled to discover your blog. My quest for blogs by men started a couple of weeks ago as a result of a male acquaintance who follows my blog asking if a male blogger could receive a "southern belle" award. Petunia passed your blog along to me. Life really is all about living well. I'm going to find a copy of the the book ASAP.

Thanks Belle!!! What a nice comment. I hope you'll visit again!