Wilbert Harrison said
Goin to Kansas City
Kansas City Here I Come
Goin to Kansas City
Kansas City Here I Come
They got a Crazy Way of Loving There
And I'm Gonna Get me Some.
When I was six, my mother made me go to a soft drink bottling plant one day. Just to see how they did it. My mom is great for things like that. I did not want to go. I had lots of things planned for that day I am sure, but she said that you never knew what you would find interesting or exciting until you went to see. An early Epic inspiration. Which I did not appreciate for twenty-five years. We spent the day on a very interesting tour and I developed a life long love of watching things being made. I never liked the soft drink much though.
So it was with Kansas City. I had a call about a bit of work in San Francisco. The call made me very happy because I like going to San Francisco. Then I was told that the job had been moved to Kansas City. Where I had never been. Or thought about going. And the job was going to last two weeks. I was overjoyed. Until I remembered my mother's voice saying "...you never know...". 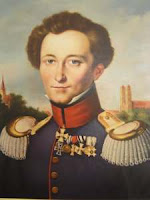 The military strategist von Clausewitz held that the first thing is to secure your home base. The Epic traveler MUST secure a good hotel. I love old downtown hotels. When they are kept up. There is a sense of grandeur when you enter. A sense of place. That you have a part in the grand scheme. Hearing Duke Ellington music in the lobby when you walk in is a good clue that you have found a superb home base. I'm not sure von Clausewitz would agree, but I'm betting on him. He looks like a swinging sort of cat. 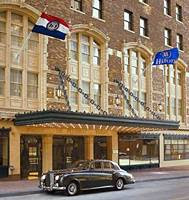 Such is the President Hotel in Kansas City. Although there are two or three other restored classic hotels in the downtown area, the President is my place. I knew it the second I walked in, heard Ellington, and saw the Drum Room lounge. When you walk into a hotel in a new city and you feel like a movie star you cannot lose. A movie star from the 1950s. When they had STARS. Look at this lobby....see for yourself..... 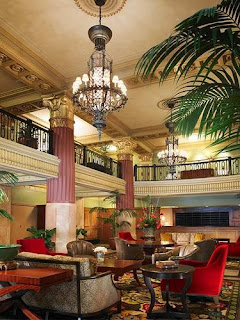 This is the scene presented to you as you enter the lobby from Baltimore Street. Needless to say, the service and rooms are top notch. The dining room in which you can linger over a large breakfast and some very good coffee doesn't detract from the star treatment either... 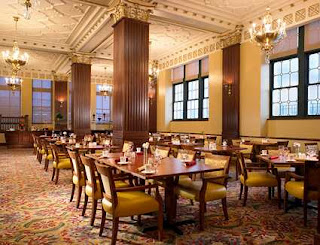 But my favorite place of all in the President is the gym. Just kidding. My favorite place is the Drum Room. The lounge is small and classic. Pam, the queen of the bar, is a young woman possessed of an old school mixology. When a friend asked if he could have a mere single-pour vodka tonic, he was informed that at the Drum Room they do not serve singles. Only doubles. Definitely my kind of bar. The Drum Room restaurant is a level down from the lounge and has one of the best hotel menus I have encountered. There is a combo playing there at the end of the week also. The staff were superb and I made several friends among them during my stay. Years ago, in the first incarnation of the Drum Room, many of the great stars of music played the room. Sinatra. Davis. Benny Goodman. Glenn Miller. Patsy Cline. So the ghosts are good. As is the food. And the drinks. Take a look into the Drum Room from the lounge steps.. 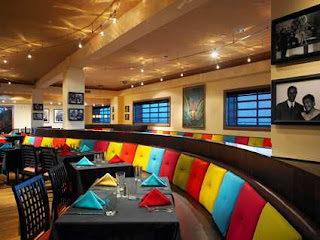 Another view looking from the stage area toward the lounge.... 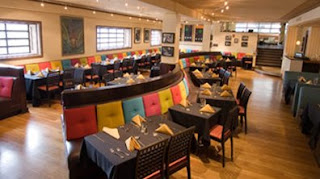 I was in love with this hotel the moment I walked in. An Epic home base if ever there was one. The President opened in January, 1926 to much fanfare. In the unfortunate life cycle of many grand city-center hotels in America however, by the 1970s it was in complete decline. To think of it, by the 1970s, a lot of things were in complete decline. Anyway, the President sat vacant for twenty five years until a visionary named Ron Jury followed his dream of restoring it to past glory. With complete success. As you can see.
But a city is not just a great home base. The nightlife in Kansas City is nothing short of fantastic, particularly if you love jazz as I do. Just in the downtown area there are many clubs and lounges that feature good live music every night of the week. I had a hard time picking my favorite places because there are so many to visit. Jardine's is a famous jazz and blues venue and lived up to its reputation for music and hospitality. The Drum Room of course.
Two places that I go every time I come to Kansas City now are The Majestic Steakhouse(http://kansascitymenus.com/majesticsteakhouse/) which is a prohibition era saloon with great food. Sit at the long upstairs bar for a pre-dinner cocktail, then head downstairs for dinner where the combo plays every night. If you are lucky, Joe Cartwright will be playing piano. The smoked trout appetizer brings back memories of Northern Wisconsin autumn fishing trips. The steak au poivre is perfect. Later, make the scene at the Blue Room which is appended to the American Jazz Museum. The Blue Room is located on the spot of one of the former hotels of the "18th and Vine" district which still throbs with life and the echos of Bird Parker and the other greats who caused crowds to throng the streets until late at night. When night life was night LIFE. The front door of the Blue Room tells you all you need to know: 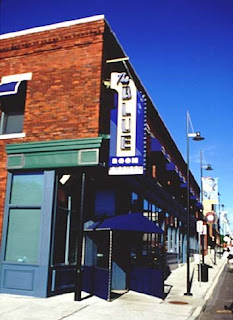 The Blue Room has a collection of vintage albums and other jazz memorabelia that make it a mini-museum even without the hot jazz that makes the joint jump several nights a week. When the show ends at the Blue Room and if (as Jackie Gleason used to say) you still want to put gas in the tank, head for Davey's Uptown Rambler's Club (http://daveysuptown.com/) where they serve the only BLACK vodka known to man and they stay open until three. AM. Daily. 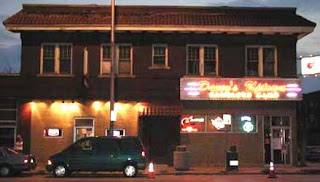 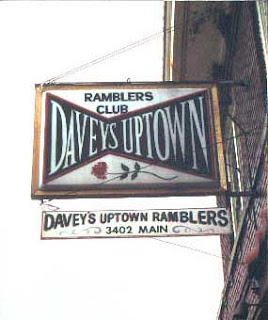 The day in any city is for me takes second place to the night, but in Kansas City you have plenty to occupy your time until Happy Hour. The American Jazz Museum (http://americanjazzmuseum.com/) and the Negro Leagues Baseball Museum (http://nlbm.com/) are both worth the trip by themselves and can take an entire day to view. Get a combo admission ticket from one of the helpful ladies in the lobby and see them both. The National World War I Museum (http://libertymemorialmuseum.org/) is one of the finest museum collections devoted to a single subject I have ever seen and is another day of exploration. And then there is Union Station.
Imagine yourself in a really good movie. A Bogart and Bacall. You are on a special assignment for the War Department in 1942. You book a first class passage on a Pullman Car. The City of New Orleans to Chicago. Then the Southwest Chief. Late the second night, a tap on your door. It's her. Another night passes. You both dress for the day. And the train delivers you here.... 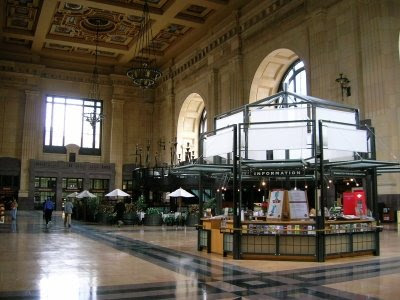 Union Station is the second largest railway terminal in America.

As you can see, it is railway travel of the highest fashion. Pierpont's Restaurant inside the terminal has a fabulous Kansas City strip steak with a bleu cheese crust. And macaroni and cheese with truffles. And large martinis. If you don't try Pierpont's, don't blame me. I'll be on the next train into town, pally.
Kansas City has become one of my favorite destinations. You will like it too. Listen to my mom. You never know until you go and see...
They've Got A Crazy Kind of Lovin There
And I'm Gonna Get Me Some...
Amen, Wilbert. Amen.
Posted by M.Lane at 1:44 PM

I have lived in KC several times in my life, and get there 3 or 4 times per year,and absolutely love it. Great food, great people,and great architechure.

LOL at your favorite room at The President being THE GYM! Funny guy!
I was going to have to cancel my subscription!

Petunia, you know me too well!

Toad, thanks for the visit and the comment. I would not mind living in KC in one of those downtown lofts...if I couldn't swing a permanent suite at the President.

I'm a little late in catching up on my reading . . . I spent half the night walking back to my hotel from DAVEY'S UPTOWN RAMBLERS CLUB one time - it's the best!

Mel, how close was Daveys to your hotel? I thought you might recognize the shot of the sign...