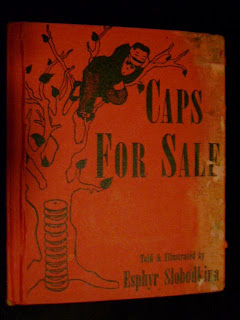 I suppose every child has one. Or used to have one. When reading was actually a favorite pass time. Before all the little video screens. A favorite book. A tale of adventure. A tale of woe. A tale of love, even if it was not recognized as such.

Whatever the topic, a lot of little children had that one book that they would drag about and push into the hands of any adult that happened to be in their path. For a little read. The one in the photo was mine. From WAY back. Before even Ian Fleming. Or Playboy. This is a story of a traveling salesman who sells caps. All sorts of caps. He keeps them in a stack on his head as he walks about calling "caps for sale...fifty cents a cap". All is well until one day he takes a well deserved siesta under a tree. Not just any tree. A tree that is inexplicably full of monkeys. That take all his caps. The rest of the story circles around the man's efforts to retrieve his caps. He gets them back. That's it.

The real story isn't about the man with the caps. It is about a little boy and his Norwegian grandpa. A man who worked on a loading dock all his life. Who had a photographic memory for numbers. Wanted to go to college. Never made it. Who had one child, a boy. That boy gave him two grandsons. I was the first. And for some period of time that I do not recall, I pestered the living daylights out of that man, making him read "Caps for Sale" over and over. Hundreds of times. He never refused. Never even sighed.

A couple of weeks ago I had the chance to read "Caps for Sale" to a boy. Several times. Reading aloud is magical. It lets you directly transfer not only a story but some karma, or love energy, or just plain old good feeling to another human being. And, in the immortal words of Dee Snyder "when you throw the energy out at the audience they throw it all right back to you". It is a great thing. Try it and see.

My grandpa has been gone a few years now and I've been missing him a lot lately. When I read "Caps for Sale", he is right there with me. Even when I read it to myself.
Posted by M.Lane at 7:38 PM

How extraordinary that you have your Grandfather's book to remember him by!

We had this book growing up! In fact, my brother recently mentioned it, when we were visiting our parents and for whatever reason we started messing around with my dad's "old man" hats. He (bro) stacked about five on his head and started singing, "Caps for Sale!" So silly, but we all remembered immediately.

Thanks for the nice comments Becs and Petunia!

Cashmere...I cannot believe you had this book!! I am so glad someone else has a happy memory of it. AND, you get my award for best blogname this week (at least).

Thanks for the visits!
ML