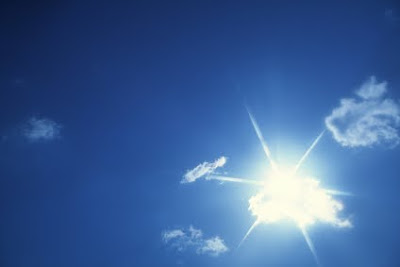 Do you know what the sun is like in the desert? Even in March? Even when there is a city built over the top of the desert? Last week on a trip to Phoenix, Arizona I received a welcome late winter dose of the sun's rays, and an extra Epic benefit as well.

The trip went extraordinarily well. My travel companions and I were feeling pretty good about ourselves, as, flushed with success we found ourselves driving down a Phoenix boulevard when we came upon a fellow working on a street corner. Outdoors. At noon. In the desert sun.

You think you have a lousy job? Try being a clearance sale sign man. You know. The poor blighter that, for a minimum wage, gets to stand out on some corner holding a sign. All day long. With no protection from rain, wind or sun. Wearing out his epidermis in the service of a store that is rather continually in a state of "clearance sale" or "going out of business". There are worse jobs. But the sign man's is on my short list of lousy ones.

As our car approached this particular desert corner, we noticed something out of the ordinary. Something Epic. This man was spinning his sign. Around his shoulders. Then around his torso. Under one leg. Then the other. Then up in the air. Finally he caught the sign, slapped the long edge of it on the broiling sidewalk, and sat on it with chin in hand. A huge grin on his face. Look what I can do. Look how good I am.

The light changed to green and traffic began to move. One car of astounded business travelers, with all four windows down, cheering and giving the thumbs up. Saluting a grand performance. The Clearance Sign Man grinned our way and gave the slightest of bows.

I do not know if the store was really going "out of business". I don't really care. What that sign man gave us was a living example of joy in what could only be described as trying circumstances. Nobility and Art in the midst of a concrete desert. A job very well done. Putting whatever it was we thought we had accomplished that morning squarely in the shade.
Posted by M.Lane at 10:00 PM 3 comments: 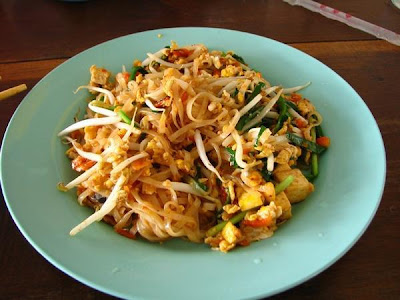 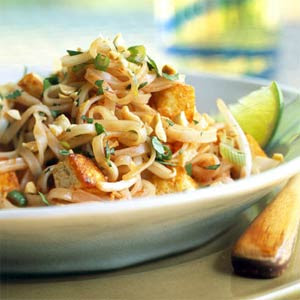 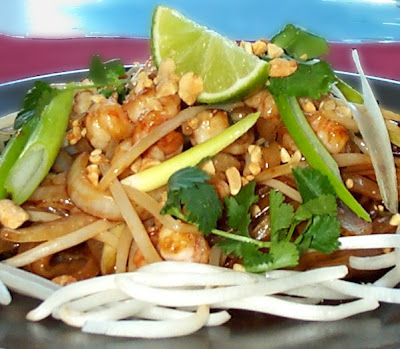 I have this friend. He is good looking, successful, very happily married, and an accomplished Thai cook. I should dislike him intently, but I don't. I owe him my love Thai cuisine because I had never tasted the amazing complexity of flavors in true Thai cooking before he took me out to a Thai restaurant for the first time some years ago.

If you poll a group of occasional Thai diners, they will probably say that "Pad Thai" is one of their favorite dishes, as it is mine. I discovered recently, however, that this is really a name without much meaning. Literally translated, the term "Pad Thai" means "Thai style stir-fried noodles". Leaving a wide range for interpretation. A wonderful recipe (from a wonderful web site and blog) can be found here.

In any event, reading up on this dish on the Thai Food and Travel site, I became aware of the American controversy in the preparation of Pad Thai. Apparently the typical way the noodles are made in Thailand renders the noodles dry and a natural tan color. Some American restaurants put catsup in the noodles to color them and give them more flavor or they add hot pepper sauce with a similar but kicked-up effect. I eat the "red" Pad Thai noodles at restaurants and I always like them. Even though I was uninformed of their lack of "authenticity". I have only had the "drier", tan Pad Thai once. At Trader Vic's. I have a multitude of good Trader Vic's stories that will have to wait to another time. Suffice to say, the difference between the "dry" preparation and the "red" versions is dramatic. A completely different flavor, much more delicate and sophisticated. And, no, I had not imbibed multiple Mai Tais at Trader Vic's before my dinner. Only one. Or perhaps two.

Although I prefer the "dry" style of Pad Thai, I certainly like the "red" style also and I'll eat it again the next time it shows up on my plate. The Epic notion is that if you like the flavor, don't worry about the authenticity. Just enjoy what shows up for you during any given meal. Or in the course of any given day.
Posted by M.Lane at 4:33 AM 8 comments: 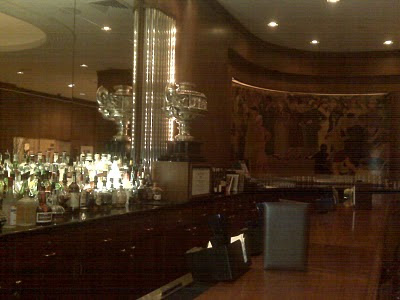 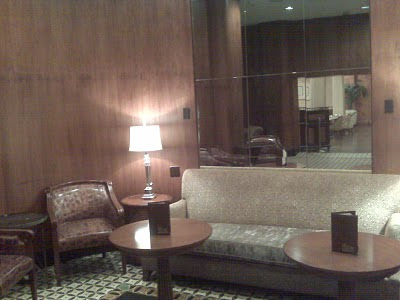 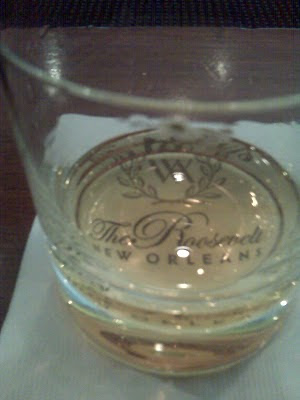 "Drink to me. Drink to my health..."--Paul McCartney 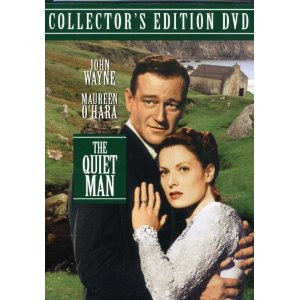 My mother's maiden name was Sullivan. I married an Irish Redhead. Is it any surprise that The Quite Man is my favorite movie? And I am not much of a John Wayne fan in general. Here, however, as a life-worn man returning to his family home in search of peace and quiet, Wayne is at his humble finest. Peace and quiet? What he finds is a magnificent woman and a lot of trouble. What you will find is a lovely bit of film making by John Ford in which the Irish countryside itself is every bit as much a star as the cast. A cast, by the way, which is chock full of fine performances by every single actor. I am confident that you will fall in love with each character in this movie just as I did many years ago. And with memorable lines such as
Ah, it is a fine, soft night. I think I'll be goin' to talk a little treason.

Oh, that's no angel. That is Mary Kate Dannaher. But pay her no mind Sean, that red hair is no lie.

If you have not had the pleasure of seeing the film, you can watch one of my favorite scenes here. It is my gift to all Epics on this St. Patrick's Day.

I watch a lot of movies, but if I had only one to keep forever, it would be The Quiet Man. It is like a trip to the Ireland of which one dreams. With a wee taste of Powers whiskey in a glass. On a fine, soft night.
Posted by M.Lane at 3:25 AM 6 comments: 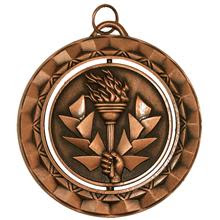 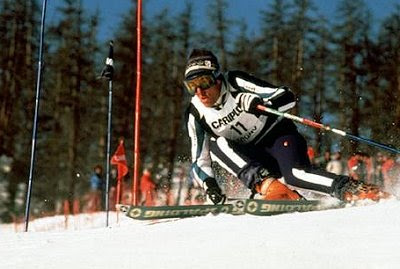 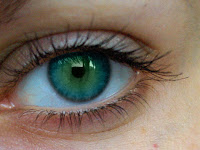 Tonight found me sitting in a very nice restaurant in a town which is the crown jewel of what has been aptly described as the "Redneck Riviera". I am alone, of course. As I considered the merits of a new brand of California Old Vines Red Zinfindale, a party of three couples was shown to the table next to me. All of these people were my age.

Of the three couples, the one closest to me was a fellow wearing jeans and some kind of long sleeve tee shirt. Bearing a designer logo, no doubt. His wife an attractive, age-appropriate [as my Irish Redhead would say] woman wearing a little black dress and a vaporous scarf double-twisted about her slender neck, a'la Parisienne. Great hair. Tasteful jewelry. Nice looking lady.
No sooner had this couple decanted themselves at the table, when the Mr. loudly chortles:
"Darlin' tell everyone about your eye surgery!"
To her credit, she did not even flinch. Just carried on her conversation with the person dining at her elbow. The muffled laughter from my direction notwithstanding.
I hope he makes plenty of money. She certainly deserves it.
Posted by M.Lane at 6:54 PM 7 comments: 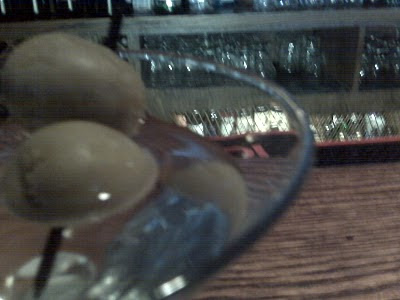 The Whitemarsh Valley Inn, Plymouth Meeting, Pennsylvania.
Posted by M.Lane at 4:35 AM 10 comments: 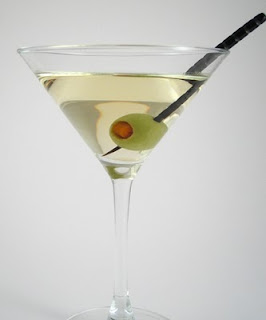 Why drink in first class?
Flying bar, free drinks, that's why.
I'll have another.
Posted by M.Lane at 8:00 AM 4 comments: 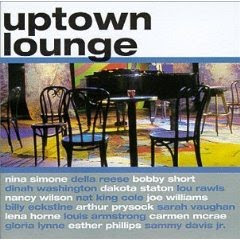 It is freezing outside. The skies are gray and bleak. Time to take the hand of your CEP [Complimentary Epic Person], light a fire, sit close with a glass of scotch on the rocks, and listen to some great music. Such as the best compilation album ever. My proof? Check the play list:

A Kiss To Build A Dream On, Louis Armstrong
My Baby Just Cares For Me, Nina Simone
Manhattan, Bobby Short
You Stepped Out of A Dream, Sarah Vaughn
Confessin' The Blues, Joe Williams
Baby Won't You Please Come Home, Gloria Lynne
The Very Thought Of You, Arthur Prysock
Walkin' My Baby Back Home, Nat King Cole
Sufferin' With The Blues, Nancy Wilson
The Lady Is A Tramp, Della Reese
Lush Life, Sammy Davis, Jr.
Unforgettable, Dina Washington
You're The One, Lou Rawls
Crazy He Calls Me, Dakota Staton
Stormy Weather, Lena Horne
Exactly Like You, Carmen Mcrae
Taking A Chance On Love, Billy Eckstine
Girl From Ipanema, Esther Phillips

This album is a jewel box of marvelous performances, many of which I had never heard before. That being said, it is Sammy Davis, Jr.'s turn with Lush Life that steals the show. It is simply one of my favorite recordings. Number three in the Epic list of top songs of all time. That one track alone justifies both the price of this out of print album and the effort you will make to procure it. But make sure you have plenty of booze if you listen to this version of Lush Life more than once in a sitting. And you will.

The back of the album says...

The club fades into darkness. Then the stage lights go on.
The audience falls silent. Slowly, carefully, the curtain parts.
The house band is cued. The music starts.
Showtime...Excited, you hold your lady's hand.
Here, at the Uptown Lounge, the parade of phenomenal performers begins...

It is still snowing/sleeting/raining outside. The fire crackles. You hit the play button the second time. Go ahead. Pour yourself and your CEP another whiskey. Snuggle into the sofa. You've earned it.
Posted by M.Lane at 3:57 AM 6 comments: