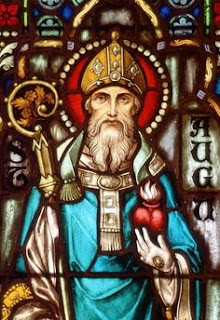 It may be recorded elsewhere in these chronicles but St. Augustine was oft want to say that humility assures our salvation as it is the foundation of all the other virtues.  He also said that pride turned angels into devils.  As it turned out, this year I was the recipient of an Epic gift from the venerable Saint on, of all days, Nouveau Day.

To refresh, Nouveau Day, which has been described as one of the most important days of the French cultural calendar, is celebrated in France and in all other sentient places on the third Thursday of November when the new vintage of Beaujolais is released for public consumption.  The barrels are rolled out and tapped at midnight to the ringing of a bell and then something of a wine based Oktoberfest breaks out with partying and drinking [and appropriate dining of course] carrying on for at least three days.  The festival coincides nicely with our American Thanksgiving holiday. 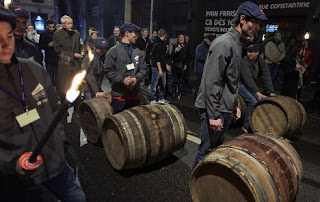 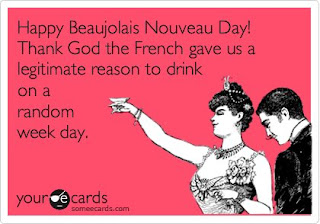 I adore Nouveau Day because it is so essentially French, it involves wine, and it is a festival of good cheer.  It is also a dandy way to kick off the American holiday season.  Critics, of course, abound.  The quality of this inexpensive and jovial wine is vociferously attacked by the vino-intellectual complex, and certain members of that complex turn their noses wayyy up upon the mere mention of Nouveau Day.  That Beaujolais in general, and Nouveau Day in particular is such a burr under the saddle of some wine folk only adds to my general satisfaction with the event.  I mean, in Japan they love  Nouveau Day so much that they drink Nouveau while collectively bathing in it.  Until hearing this report of wine filled tubs I hadn't thought much about Japan to be honest but now I have firmly placed the nation in the record as Just My Sort Of Place.

On the day in question, I left the office early in search of a couple of bottles of Beaujolais Nouveau.  As is my custom and my Francophillic privilege.  There is a nice small wine shop across the street from my office where I do regular, if modest, business.  I was, if I may say so, dressed up even more so than usual in anticipation of the event and of a date I had that evening.  Upon entering the place I sensed that dark forces were at work.  Instead of my usual sales clerk, behind the counter were two fellows I didn't recognize and they were in deep conversation with a very attractive lady who was a wine sales representative.  It turned out that the two fellows were the owners of the shop which made the ensuing horrid events even more sorry.

Not wanting to interrupt the conversation I made my way about looking for a case or two of Nouveau which I was certain had to be on display.  I didn't see any.  Finally one of the two owners asked me if he could help me find something.  I jovially replied "Yes! NOUVEAU"!  At which the two men looked at each other.  And burst out laughing.

"God no, we had a couple of cases of Nouveau from 2016 around somewhere but I put them in the garbage"!  Ha Ha Ha Ha Ha

" I had a Nouveau tie once and I used it to tie my suitcase together so I could see it on the airport carousel"! HA HA HA HA HA

I just stared at them.  I mean I know these are low times for manners and for civility in general but the nature of the comments and the tone in which they were said were widely out of bounds in my opinion.  My nice sales clerk manifested himself and seemed disturbed.

I politely replied that I appreciated the offer but that it was Nouveau Day and I was hunting for a bottle of Nouveau.  The logic of this seemingly escaped his bosses who upon hearing this broke out in a new round of raucous hooting.  This time joined by the lady wine salesperson.

My adorable and deeply missed wife, The Irish Redhead, used to say that at certain times I was way too tolerant of people.  Her corollary was that I should handle situations such as this the way she would handle them.  Fire. Brimstone. Going to guns as the first option.  The Irish Redhead way.  Alas, some of us lack that gift, usually those of us with Norwegian fathers.  As a result, I gave them what could only be described as a fishy look and I strode out the door never to return.  And when I say I strode I do not employ the term loosely.  If there was ever a time for fishy looks and striding, that was the time.

I am happy to report that upon entering a competing shop they were more than happy, excited even, to point me in the direction of a nice bottle of Beaujolais Nouveau.  I bought two.

Where does St. Augustine factor into this you may fairly ask.  Well as I was striding out of the shop I felt pretty low.  I mean they had made abject fun of me.  In public.  In front of a lady.  In less allegedly civilized times I would have had no choice but to demand satisfaction on the field of honor under the Code Duello. 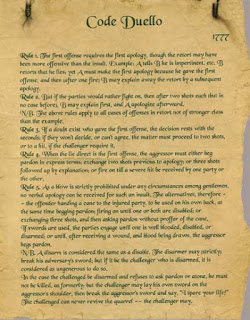 Now THERE would be a place where a boy with Viking blood in his veins might capture the day.  Especially against an obnoxious wine merchant or two.  In the event, it finally occurred to me that being humbled in this fashion ultimately stoked my humility rating a notch or two up the scale.  And that as a result I have that much a better shot at salvation and a place at the heavenly table when they celebrate Beaujolais Nouveau each year.  I have it on good authority that Nouveau Day is a pretty big deal in heaven.  I hear that they allow bathing in it too. 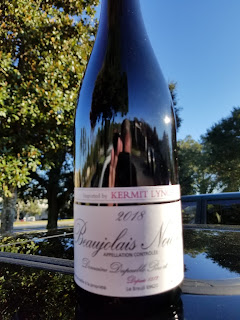