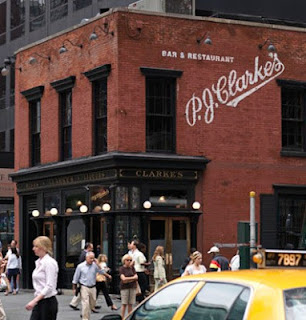 I love this place.  Frank loved this place.  You will too.  Since 1884, located at Third Avenue and 55th Street, NYC. Open until four in the morning. Every day.  It is so great to see an old photo like this one and think that I have been right where the fellow in the bow tie is sitting. Many times. I think the barman may be a different guy now. Maybe.

Also, yesterday was the birthday of P.J. Clarke!  Let's all raise a glass to his memory and to the enduring greatness of his bar... 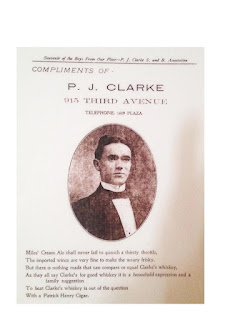 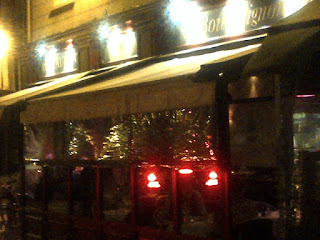 After a long, wet, blustery day at Versailles, I was ready for some hearty food.  Wandering through the Marais a day or so before, I was sitting at a cafe on the Rue de Rivoli drinking a glass of wine and watching the passers by when I saw a restaurant across the street in what appeared to be a cul de sac.  My dining senses went to full alert and I made a note to come back to check it out. 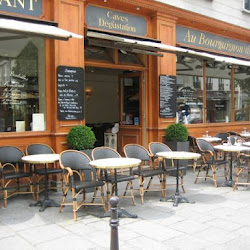 The rains abated a bit after my soggy return from Versailles so after a change of clothes I sauntered out through the damp evening air, across the Seine and past the Hotel de Ville.  Turned right onto the Rue de Rivoli, headed toward another superb night of dining.  My sixth sense for restaurants tingling more and more, I approached Au Bourguignon Du Marais.

The actual truth is that it wasn't the sixth sense that finally tipped the scale for me to go inside.  Nor the really nice daily menu printed on the chalk boards by the door.  It was a girl.  A young woman actually. A waiter at the restaurant who happened to be standing in the doorway.  Glossy black hair with eyes to match.  An older couple passed by in front of me and they received a big smile from her with an earnest invitation to come in for dinner. "You will love our food".  The older couple hesitated a moment then went inside.  The girl seemed genuinely delighted.  Intriguing since she was too young to be an owner of the place and too unoppressed looking to be a daughter of an owner.  Her enthusiasm transported me. From Paris back to my town.  To the drive-through window of a franchise burger joint...

When you are raising a teen who is your gender, you feel at least some responsibility to set his compass bearings. To give direction.  Some fathers very much believe that they need to set a course for a son with detailed instruction on all facets of their future.

My focus, through insight or perhaps mere lethargy, has been more narrow.  I am perfectly comfortable with The Future Rock Star's goodness as a person.  Beyond that, I have no concern for where he takes his life but I have great concern for the manner in which he does so.  I want him to live with enthusiasm.  I want him to find something that he would do for nothing.  Just for the joy of it.  To be invested in what he does.  Every once in a while, fate helps me out with a prime example.

We never go into the burger joint.  There is no time to go inside.  The FRS hates sitting at a restaurant table waiting for food.  It slows his progress toward whatever unknown port is on the horizon.  Consequently, we get the food at drive-through and he wolfs it down en route.

I hate to say so, but the typical person you meet in a burger joint drive-through window is not too interesting.  Drone-like is more accurate. Zombie-ish.  The job plays a large part in this to be sure.  But on one occasion, we rolled up to the same window we had visited dozens of times before and met a genuinely great young man.  Enthusiastic. Engaging. Friendly.  Either a really superior guy or a really superior new class of drone.  Luckily, he turned out to be the former.  A fellow really glad to be standing there handing out food and making change.  Excited about the opportunity.  And it showed.  As it will.

After getting our food along with a sincere wish for a great evening from the young man behind the window, the FRS and I looked at each other.  I decided to try for a really quick father message.  They have to be really quick because the storm shutters drop over those hazel eyes after about ninety seconds of father message.  I came out of the gate strong...

That was a really nice guy wasn't it?

My dad would have said that a guy like that is "going places".

A guy like that, with that sort of enthusiasm at a drive through window, he will do anything he wants to do in life, don't you think?

Seventy-two seconds.  A direct hit on the bulls-eye of fifteen year old awareness.  That night I went out into the garage and pulled the burger joint bag out of the garbage.  So I could get the email address of the company that owns the hundred or so locations around me.  I sent a note saying how great this young man was and how lucky they are to have a fellow like that working for them. It is the only email of that sort I have ever felt compelled to send.  Then, five months later, I found myself standing on a sidewalk in the Marais listening to the young burger impresario's spiritual sister radiating the same sort of happy energy.  On the other side of the world...

I walked up and asked those ink-black eyes if there was a table for one.  For some reason, my limited French locked up a bit when she looked at me and grinned.  I may in fact have requested a grouse for one or a barrel for one.  In any case she understood what I wanted and seemed delighted that I wanted to have dinner.  In her restaurant.  It was a bit early in the evening but the place was pretty busy.  As luck would have it, the young woman was my waiter also.  I began with a bottle of Burgundy.  The only one I had during the trip.  A marvelous chicken terrine.  Cheese.  And then, what else could I possibly have for my main course?  Well, yes.  I could have had escargot which Root says is particularly Burgundian because the best snails come from the region.  We all know, don't we, that "the most favored snails are those which feed on grape leaves...?"  How could Burgundian snails be anything but sublime?

My introduction to snail eating was some twelve hours away, so I decided upon the Boeuf Bourguignon.  Root, again, describes the classic version as "...beef cooked in a red wine sauce accompanied with mushrooms, tiny onions, and small pieces of bacon...the meat is braised in Burgundy red wine and when it is three quarters cooked, the wine is strained... and returned to the pot along with the other ingredients...to simmer together".  In other words, just about the perfect dish for a cold, rainy evening.

Although most people have probably had some variety of Boeuf Bourguignon before, I can say that I had never really had it until that night at Au Bourguignon Du Marais.  The dish arrived in a crock and when the lid was removed the aroma was simply unforgettable.  It was like breathing burgundy wine.  Which in some fashion I suppose I was.  Although the content of the crock was classic and according the the Root described recipe, the flavor of this dish was unlike anything I had experienced before.  Wine, beef, onions, herbs.  Rich, complex flavors in an oh so simple dish. Unforgettable.

In fact, when the crock was first opened, an older couple at the table next to me also caught the scent and exclaimed how delightful it was.  They immediately ordered a crock each.  My sort of couple.  In the charming fashion of my Parisian dining experiences, we began talking and got to know each other.  They were retired teachers from the San Francisco area on what sounded to me like a world tour.  Just lovely people.  Somewhat Calvados deprived, however.  As I ordered Baba au Rhum for dessert I decided to rectify that deficiency and ordered them each a Calvados which they looked at suspiciously then tried and declared "strong but delicious".  Two new converts to the school of Calvados.   A fine ending of yet another great meal "en Paris".

After wishing my new friends a good evening and bonne chance on their trip, I headed back to the Isl Saint Louis and the Pledge Bar for a late nightcap.  Calvados of course.  As I walked down the narrow stair into the bar, the young barman reached for the bottle and waved.  This Paris thing was getting better and better.  That said, the following day was to be a special one even for this trip.  A day without rain filled with a pretty new friend, a walking tour of the Latin Quarter, Chanel shopping, and....my introduction to the temple of gastronomy known only as...Taillevent.
Posted by M.Lane at 11:31 AM 2 comments: 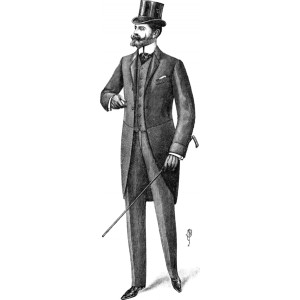 As you have no doubt read many places, we are now firmly into MOVEMBER!  A celebration by men of facial hair to remind people of male health issues such as testicular and prostate cancer. Epic friend Suburban Princess has come up with a very clever fund raiser for the cause that you can see, and support, here.

In case you go MO for the next few weeks and decide to take the plunge and keep your new hirsute persona, you can develop a handlebar moustache and join the club dedicated since 1947 to this distinctive style.  In any event, thanks to everyone who raises awareness of all cancer issues the year long and in particular to those behind MOVEMBER for this very special effort.