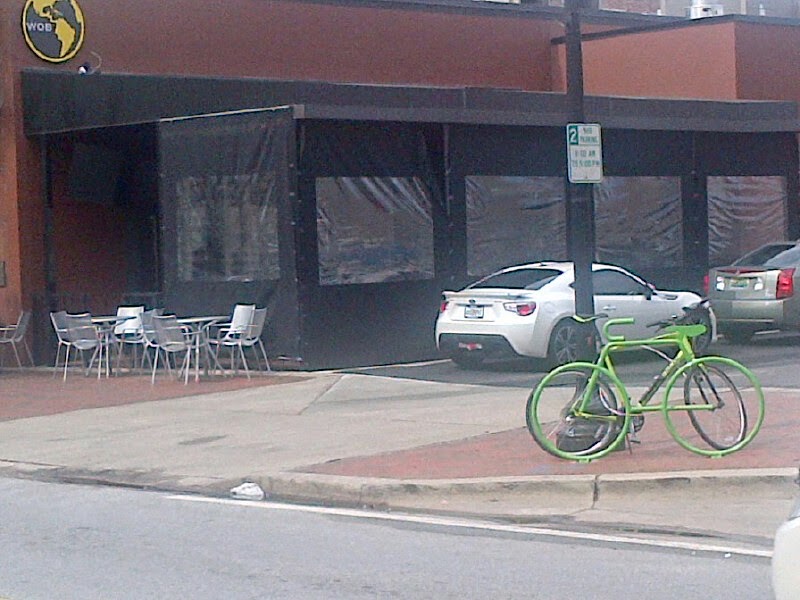 Located next to what was then a store selling fancy military uniforms, it occupied the smallest business space I had ever seen.  The area shown by three windows of the enclosed porch of the bar in the photo above.  Nobody really knew how long it had been there or when it opened for business.  It just seemed to be there one day.  It didn't have a name on the door.  Or anywhere else that I recall. It didn't have menus.  Only a small chalk board hanging on the outside with the lunch special written on it.  No hostess. No waiters. You could easily walk right by without noticing there was a business of any kind located there.  As I did, many times. Despite the fact that it was right there on the main street of my town. Until the bright Spring day I was strolling by, looking for a place to have lunch, and someone opened the door right in front of me.  And I could smell the food cooking inside.  The result was an epicurean epiphany.

Chef Michel had photos all over the walls of himself, taken with famous people for whom he had cooked in the past.  In vastly grander places.  Yachts.  Ball rooms.  Huge kitchens.  I never spoke to him much other than to ask about the dish of the day so I never found out how someone with his abilities wound up running a one-man bistro in a place where authentic French cooking was virtually unknown. I never spoke to him because he didn't have the time.  Because at Michel's it was Michel who did everything himself.  From greeting you when you walked in to seating you at one of about ten small tables to telling you of the special and perhaps one other dish offered that day, to taking your order and then plating it and bringing it to you. Oh, he also took the payments [cash only please] and cleared the tables after you were finished.  No wonder he was only open for lunch. He wasn't a young man and even his obvious energy wasn't boundless.  He stayed open for a couple of hours a day, until what he had made that morning was gone.  Then he closed the door.  Every seat was always occupied.

I guess it was kismet.  I had just finished reading A.J. Liebling's Between Meals for the first time and I was dreaming of Paris and of French cuisine. A city I had never visited.  A cuisine that I had never tasted. Until I went through the door into Chef Michel's tiny dining room and had Coq Au Vin for the first time.  After that, I dined there several times a week.  Coq Au Vin.  Home made pate, and if you were really lucky, a terrine de lapin.  Boeuf Bourguignon. Oh......and the grand Bouillabaisse. I have never had Bouillabaisse to equal it. All classics, classically turned out by an expert and loving hand.  I could have eaten there every day for the rest of my life.

But.  "All good things..." and all that.  One day there was no chalk board on the door.  And the most glorious chapter in my town's dining history to date was over.  I never heard why Chef Michel moved on or what happened to him afterward. In all the great passions of life there has to be a lighting of the torch.  My Epic adventures in dining began in that tiny dining room. Every so often I will walk past where Chef Michel performed magic every day and I miss that food so badly I get a catch in my throat.

Wherever you are Chef, I wish you well and I hope and pray that you are still making those marvelous dishes for people as ready to be set off on a life journey of dining pleasure as I was all those years ago.  I have been to Paris.  And I have dined well.  Merci beaucoups et meilleurs voeux mon amie.
Posted by M.Lane at 7:27 AM 2 comments:

Some time ago, I posted an epicurean exploration of New York based upon a 1952 copy of Gourmet magazine that had come into my hands.

Not long ago, a nice gentleman sent me an email about any background information I had in mentioning Villa Camillo in that post.  He was interested because his grandfather owned the restaurant.

At the time, I could not find the article I had used and I replied that I would keep looking.  I then promptly lost his email address.  I then, of course, found the article.

If the fellow should read this and will send me an email, I can now send him a scan of the article on Villa Camillo.  Thanks!