It is clear from these archives that I am an unabashed, and unrequited, Parisiophile. I read books about Paris. Especially about dining there. I look at maps. Photos. I even look at luxury real estate ads from Paris on line. Just to prepare myself for the day when I set foot in La Ville Lumiere.

To that end, I also get a few email newsletters about and from Paris. My Little Paris is a wonderful one. It is written for the lady Parisiophile, but it is equally enjoyable to all.

Take, for example, the text of the most recent MLP effort, entitled "Good Morning Paris":

Sunday morning, 8:30 a.m. The baker is ravishing his first client, snorers are winding down their purring and Paris is slowly waking up. And you? As you enjoy those first, soft sunbeams, you're just on time for a secret ride around town on an electrical bicycle.
If anything could make me take a ride around town on an electrical bicycle, this paragraph is it. I may well do it. Once I arrive. Until then, I will continue to enjoy the mailings from MLP which, for a few minutes, transport me there. Meanwhile, there is great French music on the internet, poems, photos, maps, and the wine and cheese of course. In the immortal words of Johnny Mercer...

Just watch the smoke rings rise in the air
You'll find your share of memories there
So dream when the day is through
Dream and they might come true...
Just dream...dream...dream.

Lovely web sites like My Little Paris help us to do just that.
Posted by M.Lane at 5:22 AM 1 comment:

Quotes From My Luggage 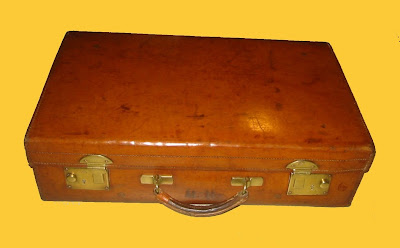 While packing for a trip tomorrow, I found a scrap of paper in my suitcase with two great quotes on it. I do not know when or where I wrote them down and I did not write down the author who created them. They are too good to be mine. In any case, I share them for your entertainment.

"For adults, romances are variable and friendships are the constant. Privileged youth reverses the equation: love affairs are constant and it is the friendships that vary."

If I keep finding notes to myself like this, I will make this a regular Epic feature!
Posted by M.Lane at 9:52 AM 3 comments: I was there alright. TGI Friday's. A Wednesday evening, just before six. Mid-week happy hour. Actually I was ordering take out. With a pop on the side for the wait. If you want to see a genuine selection of characters, check out this scene sometime. Remote control trivia gaming using some sort of satellite keyboard is a blood sport. With hard questions, too. Such as "mint is in the same family as which of the following...?". As I ordered my drink, I braced for Happy Hour Hell. I made a mental note to revisit my Dante to see if this is one of the circles. If not, I thought it certainly should be.

The young lady behind the bar was cute but not too cute. I wouldn't try to ask for an old school cocktail here. This is definitely a highball joint. The old-ish fellow to my immediate left was wearing khakis, a gingham check shirt and a Crocodile Dundee hat. Suspiciously, he seemed to be drinking water which deflated his outback image. He stared grimly at the screen as each question and set of answers appeared, occasionally calling out "Who could know this?". The rather old fellow to the left of Dundee was drinking coffee from a mug he must have brought in himself because it had "I [heart] Nuns" printed on it. In red. He got more answers correct than Dundee but also loudly agreed with Dundee that most of the questions were too hard for anybody to answer. Sipping my Jack and water, I had to agree. Although I didn't verbalize my opinion like my neighbors.

Ultimately, it didn't matter if Dundee or Nun Man got one right every so often. Because across the bar was another older fellow wearing a Greek fisherman cap and drinking very large Margaritas. I noticed that his drinks come out of a shaker, not a freezer/blender, so I began to revise my opinion of the bartender.

One rule I have consistently found to be sound is to beware of men in Greek fisherman caps. Particularly older men. They know things. Not pleasant things. Have been places. Not pleasant places. Sometimes they carry small wicked knives. Trust me. I know. Once I saw this gent, drinking large, real drinks, I knew where to put my money. Dundee and Nun Man never had a shot.

The Greek Fisherman was a large man, with weather hardened skin and a fringe of white hair curling out from under the edges of his cap. He would watch as each question came up on the televisions over the bar, take a long pull at his Margarita, and stretch a finger out toward his response keyboard. Almost bored. Then he would almost unfailingly tap in the correct answer. Sort of like Auric Goldfinger playing Chemin De Fer. At TGI Friday's. On Wednesday evening.

Finally, defeated, Nun Man threw up his hands and walked out of the bar to have a smoke muttering how nobody could get the answers right and how SOME people are just damned lucky. The bartender grinned, refilled his Nun mug with coffee, and waited for his return.

While Nun Man was out calming himself with a Marlboro Red, I noticed an odd thing. The bartender referred to all of the older folk at her bar by name. Asked about their families. Knew their drinks. Many of the customers raised a hand to each other as the came or left. Some hugged. When Nun Man returned to the trivial arena, the Greek Fisherman was paying his tab and preparing to leave. Leaving the field of play to lesser men. The bartender glanced sideways at Nun Man and asked if he had remembered to take his medicine that day. He muttered that he had, grinned sheepishly, and returned to his keyboard. I sipped my drink and tried to remember if I had taken my medicine that day as well.

Kingsley Amis held that, prior to degradation by corporate ownership, music systems and television, the English pub was an important social institution because it provided patrons with an extended family network. I believe that Waverly Root said much the same about good little Parisian bistros. The point being that pleasant communal activity is essential to human social existence despite what certain well-read hermitic sorts may espouse. What I learned that Wednesday evening at TGI Friday was that a good bar doesn't have to be located in a discrete location or even have very good drinks. A good bar can be found in a mall parking lot behind rather loud red and white striping. Because a good bar comes from the people inside it. At happy hour. Or any other time. Dundee, Nun Man, the Greek Fisherman and their bartender deserve my honest thanks for reminding me of that simple truth.
Posted by M.Lane at 10:05 AM 9 comments: