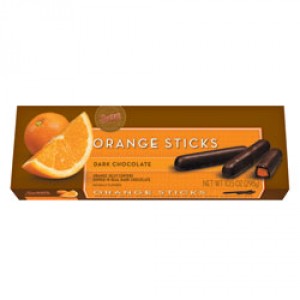 It may come as a surprise to the Epic reader that I do not typically enjoy candy.  In fact, I am not usually a dessert person despite what my neo-Edwardian physique might indicate. But that does not mean that I am immune to the siren's song of a great candy.

For example, when I was shopping at the Giant Discount Store the other day for Easter provisions I was exploring their tremendous annual display of Easter candy.  On one corner was a pile of boxes of Sweet's "Orange Sticks".  These caught my eye because they looked "old Florida".  Like something my Dad would have bought from a road-side stand on the Tamiami Trail in 1948.  Like something I would love.  Man was my dining spider sense right on!!!

These little candies, made by the Sweet's Candy Company of Salt Lake City since 1945 are, without question, my favorite candy of all time.  They are simple little bars of orange [or raspberry, or cherry, or BLUEBERRY] jelly covered in the MOST amazing dark [or milk] chocolate.  That is it.  Nothing fancy.  And, just like me, very old fashioned without being too conservative.  They go great with strong coffee.  And with cognac. And with red wine.  Or with nothing at all.

The Sweet's Company has a wonderful ordering option where you can buy a mixed case of Orange, Raspberry, Blueberry and/or Cherry sticks assorted however you like.  Bespoke candy. And at very reasonable prices.  I am in candy heaven. Suffice to say, I am laying in a case or two of "sticks" and I will eat them every day the rest of my life.  They are that good.  I am sure that any Epic would agree.
Posted by M.Lane at 9:59 PM No comments:

The regular Epic will know that although I love wine, I have a limited ability to describe it in a "winely" way.  So I will just say this. There is this young fellow and his wife in California. They decided to chase a dream and open a very small vineyard which he says has kept him "out of trouble and in debt since 2009". They don't make a lot of wine every year but, man, what wine they make!

I bought three bottles of this 2012 Stori Vineyard Pinot Noir on a whim from an on-line retailer.  The review of the wine was stellar including words like "decadent", "stacked with flavor", "rich and polished" and....the clincher...."bacon smoke".  But I honestly bought it because of the story of the young couple, Vaughn and Duffy, the 2.25 acres the 75 cases of this wine comes from and...yes...the label and the wax on the neck of the bottle.  As you well know, I am nothing if not a gustatorial and gourmandine romantic. So I bought three bottles early last year.  Hey, my first bottle of Makers' Mark bourbon years ago was based solely on the wax.  That choice seems to have turned out all right.

The first bottle of Vaughn Duffy was opened for my birthday and I shared it with two members of my blue ribbon drinking panel, Big D and the Mississippi Queen.  A truly Epic couple. I owed these two a LOT after the notorious Chelada tasting debacle of 2010.  I decanted.  We waited, nibbling expensive snacks and occasionally staring at the decanter like we expected something to happen.  I poured, just praying that I would not suffer the Wine Lover's Broken Heart caused by dashed hopes of a new wine. We toasted.  We drank.

There were groans of delight as we were all blown away by this wine.  I swear we all could smell the "bacon smoke" mentioned in the sales review. I immediately wished that I had splurged on a whole case of it despite the fact that my wine cellar cabinet would be completely taken up with that many bottles.  This marvelous wine made my birthday last year very special indeed.

I was fortunate to drink quite a bit of good wine in 2015 and I made an effort to move my wine purchases up the scale a bit.  But, contrary to Epicurean principles, I didn't open another bottle of Vaughn Duffy until my birthday this month. This year's birthday was riddled with familial medical stress and put in shadow just a bit by the fact that Big D and the MQ were not available for a re-test.  But my son The Future Rock Star took a taste and said "Dad this is OUTSTANDING".  I whole-heartedly agree. I was just as in love with the second bottle as I was the first despite the year that had passed and despite the other wines I had tried in the interim.  I hereby crown Vaughn Duffy 2012 Stori Vinyard Pinot Noir as my 2015 "Bottle of the Year".  Without hesitation. 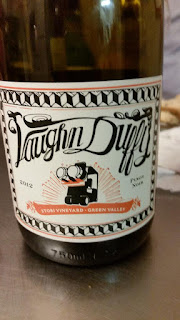 The Original Empty Bottle--March 2015--Bottle Of The Year