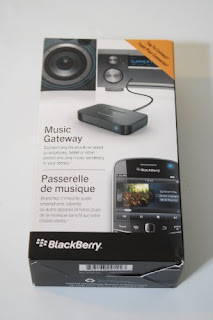 I am thankful that I have a pretty great car.  The first new car I have ever owned.  And it has lots of cool gadgets typical for the price range.  One thing mystified me however.  The Bluetooth telephone connection for my cell phone is instantaneous and perfect in my car.  Not so for the music on my phone.  I have a new cell phone too, that my son described as "sick".  So I suppose that is very good.  But the music on my phone will not play on the car audio system.

One night when I had NOTHING better to do I ran this problem on Google and discovered that it is pretty common.  It made me feel good to see that there are cars costing a LOT more than mine that have the same problem.  Some sort of electrobabble about different types of Bluetooth signals or whatever.  No amount of Scotch was going to make that interesting. In one of the comments to a post about this issue however a fellow mentioned that Blackberry made a little device that, when plugged into the accessory jack in his car allowed his phone to play over his audio system.  I looked for the gadget on Amazon and saw it was under $30.00!!!! [It is under $20.00 today.]  Of course I "one clicked" it and it was winging its way to the hinterlands.

I have to say, this thing, whatever it is, works perfectly.  It is the size of a large pack of matches, requires no tech savvy to start using, doesn't take up any room, and does exactly what it is supposed to do.  I LOVE IT.  It allows me to play all my cell phone tunes through my car audio and I can also stream Pandora or Slacker or whatever through the car too using this and the app on my phone.

This little thing comes with the highest EPIC recommendation!!!  Trust me, if I can use it ANYONE can use it.  Enjoy!!
Posted by M.Lane at 2:53 PM 2 comments:

Email ThisBlogThis!Share to TwitterShare to FacebookShare to Pinterest
Labels: Do, Go, Listen

George, We Need You Now 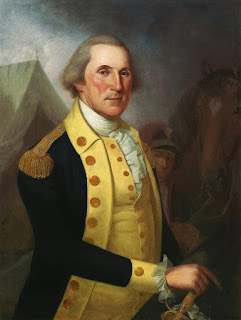 Drafted late at night after watching "political television".  And after drinking some bourbon...

He lacked formal education but his intuition was keen.  He was at times envious of his elder brother. Unable to inherit his father's estate he turned to a military life under British rule.  He was a spectacular horseman but as a young commander he failed rather spectacularly. With legends trailing him.  He could not be killed. "Did you see him ride in front of that fusillade...not a musket ball touched him."  More than one time in his life a sea of gunfire seemed to part to allow him to pass unscathed.

He eventually married well, loved his land, cherished his wife. Loved her son as his own. He rode, brewed whisky, drank wine and ale. He was known when provoked to curse creatively.  Then one morning it was 1776 and something more was required.  Deeply believing in the notion that one's privileges came hand in hand with equal levels of obligation to the world,  he grudgingly accepted command of a rag tag band of amateur soldiers.  He freely admitted that he was unqualified for the task at hand.  Which was merely to attempt a fight against the finest war machine the world had ever seen.  Much of the Upper Crust was against him.  And the Politicians....they schemed and undercut and criticized at every turn. Even some of his own officers tried to depose him. He had to beg a bickering collection of "sovereign" states for guns, for uniforms, for boots, for food for his Army. But throughout it all he and his wife stayed with the troops. Many went home as was their right. Many deserted. The ones who remained did so for the independence of their homes from the overarching control of a king....and they stayed for him as well.

He was able to press down his ego to accept the help of several professional soldiers from other traditions who eventually turned his band of deer and rabbit hunters into a worn but formidable army. Not afraid to fail, he took chances and, eventually, began to win battles.  Trenton. Princeton. The rest, as they say, is History.

Afterward he was almost horrified to see that he was the primary choice to lead the nascent country. He was absolutely horrified that the proposal was for him to become King George I.  When offered a kingdom he was unique in history to refuse.  He became the first President of the United States of America.  President Washington knew he was a rural man of action sinking himself into a world of people who sat around indoors all day.  A world of political intrigue for which he was very obviously unsuited.  In his inaugural address he acknowledged that the smartest citizens would properly have a "distrustful scrutiny" of his qualifications; that duty was bound to privilege; and that by undertaking to be a new and free nation, he acknowledged that Heaven had ordained that "the sacred fire of liberty, and the destiny of the Republican model of government were deeply...and perhaps finally staked on the experiment entrusted to the hands of the American people."  He also announced on the first day of his new job as President that he would work without compensation other than for reimbursement of proper expenses as allowed by Congress.

He was too different from what they really wanted which was a tall, famous figurehead that they could push around and tell what to do.  That was one game they should have known he would refuse to play. So the Politicians, back biters and anonymous editorial writers set upon him and made him suffer. Abused him in the public eye without the opportunity to defend himself.  Modern social media attacks have nothing on the newspaper editorials of Washington's day.  After suffering through two terms in office he walked away from government, retiring to his beloved Mount Vernon.

What can this man, gone since 1799, possibly have to teach to us?  We are so much more "sophisticated", "advanced", "educated".  We have connections to outer space in the palms of our hands for goodness sake.  How about notions of civility, of honor, of privilege leading not to more privilege but to the obligation to serve.  Sacrifice. Rejection of absolute power. Standing strong in the face of brutal adversity with the Faith that there is a Divine Reason for you to be there to take the punches.

A great historian has called George Washington America's "indispensable man".  Certainly true in the 1700s.  And if we care to pay him a bit of attention equally true today.  I will raise a glass on February 22 and toast him a Happy Birthday as I always do.  I, for one, miss him rather a lot.  Those other people--the ones who hated him then--would still hate him today.  That would probably be a very healthy thing.  In his farewell address he said...

“However [political parties] may now and then answer popular ends, they are likely in the course of time and things, to become potent engines, by which cunning, ambitious, and unprincipled men will be enabled to subvert the power of the people and to usurp for themselves the reins of government, destroying afterwards the very engines which have lifted them to unjust dominion.”

Two-hundred and twenty years later, nothing seems more true.
Posted by M.Lane at 6:55 AM 6 comments: