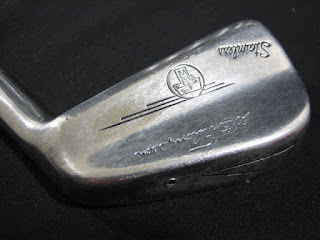 To understand this story, you must also understand my golf clubs.  And my heritage.  My dad was a golf professional.  One day when I was in my late teens, and probably not going to grow any more, my dad gave me a set of custom made golf clubs.  By THE custom maker of the age.  Stan Thompson.  Of Beverly Hills.  Woods made of wood.  Persimmon to be exact.  The best.  Forged irons of a slender design known as "blades".  A design favored then by professionals and the most advanced clubs available at the time.  I loved those clubs more than almost anything.  Because I hit them well.  Because I love golf. And mostly because my dad gave them to me.

Time passed.  Golf technology rocketed ahead along with everything else. My back became much less limber than in my teen years.  I played golf a lot, then less, then little, as life's duties overtook me.  When I did get a chance to play a round of golf, people would look at my clubs with amazement and ask why I used such "outdated" equipment that "hindered" my game.  My typical reply was that as little as I was playing the clubs were hardly the reason for my ballooning scores.  The real answer was....I love the game, I love the clubs, and my Dad gave them to me.

Then 2014 happened.  The return reader will recall that last year was brutal for me and my family. After returning from a particularly harrowing out of town medical trip with my wife, I sat down one night and promised myself that I would start playing golf again on a regular basis.  Just one round per month.  I had to do something for myself and it was a small step in the right direction.

And I kept my promise to myself.  One round at a time.  One month at a time. I even tried to practice once in awhile inspired by my son finding it fun to go to the driving range.  A strange thing happened.  Even though "hindered" by my clubs by my age and by my general state of deconditioning my swing felt better than it ever had.  More compact.  More....systematic.  At times I found myself hitting shots that I had never been able to hit before.  Some really great ones.  I was still playing pretty mediocre golf overall, but ...there was something there I had not had in the past.

Advance the clock to earlier this month.  I had the opportunity to play a round of golf at one of the great golf clubs in the Chicago area with some very good pals.  I admit I was pretty burned out and frazzled when the trip began.  Once we arrived however we found ourselves in a beautiful day out on a classic golf course.  I was playing a mediocre round, typical for me these days.  Somewhere on the back nine we came to a long par four which was pretty much straight away.  I managed to block my tee shot to the right.  WAY to the right.  Off-the-correct-hole-onto-some-other- hole kind of right. Using the fancy pants new metal driver my brother was kind enough to give me last year.

When I got to my ball, I found myself looking at a shot over some bordering trees about 195 yards to the green.  I am not generally recognized as a tremendously long hitter of the golf ball so I was pondering what club to hit when a couple of college golfers came up.  They were actually supposed to be on the hole where my tee shot ended up.  Nice young fellows.  Sharp looking.  Sparkly new style clubs.  Gentlemen, they stood back a bit to allow me to hit my shot first.  I needed a wood to cover the distance to the green but an iron to get over the trees.  I decided to hit a three iron, my longest distance iron club and one of the hardest of my clubs to hit.  A bit short for the distance at that.  The college men eyed my club as I pulled it from my bag.

"Say, sir, are those blades you're hitting?"

Yes, they sure are.

"Those are antiques aren't they?"

Politely said and a legitimate question.  Chuckling, I had to agree.  The thought had never occurred to me before.  Of course they had been in my bag for several decades when they didn't qualify as antique.

I took my stance and addressed the ball.  Put my good tight swing on it.  Kept my head dead still. And I flushed it.  As soon as I hit it I knew it was as good as I could do.  I followed through to see the ball arcing high over the tree line straight at the flag on the green.  The green on the hole where I was supposed to be playing. It settled down quite nicely about four feet from the cup.  An electric thrill shot through me.  I couldn't help it.  I stuck that antique three iron in the air and just stared upward for a moment in triumph.  A fifty-six year old showing off to his Dad.

"Sir, that was one GREAT shot."

Two thumbs up from the college varsity crowd who then went on about their way.  I missed the putt for birdie, but I was completely rejuvenated by hitting a perfect golf shot.  One so pure, so fitted to the need of the moment, that I am confident I have never hit one better in my life.  That moment took years off of my emotional fatigue.  Due to the magic of One Perfect Thing, for one perfect moment, I felt like my Dad.

That golf shot was fortuitous.  When you are strung out and feeling low I cannot recommend the deployment of One Perfect Thing highly enough.  It may be a great tie you haven't worn in a long time.  A scoop of your favorite ice cream in a flavor you haven't had in ages. A long look into the eyes of a loved one.  Or just getting lucky while doing something you love and being in the moment enough to recognize it when it happens.  Find a Perfect Thing.  They are out there for us all.
Posted by M.Lane at 5:43 PM 12 comments:

Email ThisBlogThis!Share to TwitterShare to FacebookShare to Pinterest
Labels: Do, Live, Love 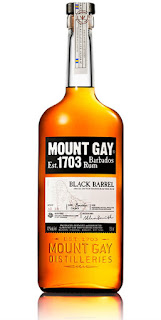 The oldest rum producer in the world.  A double distilled effort in charred barrels. I find it a classic sipping rum with lots of smoke, vanilla, oak, caramel.  A boozesnob marked it off for being "an obvious attempt to lure the cross over bourbon drinker".  That sold me.  Rum season is in full swing. Try it and you will be sold as well.
Posted by M.Lane at 7:26 PM 1 comment: 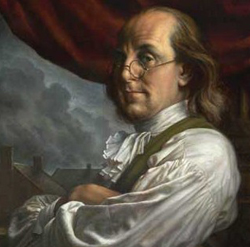 Franklin:  A Republic madam.....if you can keep it.