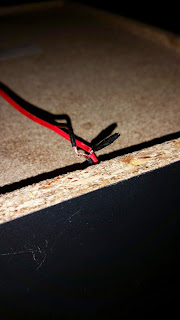 It is a funny thing. My son is soon to be 18 years old. In a blink of an eye things turned 180 degrees from him running up to me saying "Daddy, look what I can do" to me hoping to get his attention and at times trying to illustrate the notion "Son, look what I can do". One of those "great circle of life" things the great sages of toddler dinosaur stories speak at length about.

When I was a Senior in High School, they had a couple of classes that were actually useful. Like electronics. Where we learned how to solder [do they even DO that any more?] and wire a lamp. Things like that. They don't "waste" their time on this sort of thing any more it seems at least where I live. In the event, as I was sitting in a sort of blue funk a couple of days ago, the Future Rock Star came up with one of his stereo speakers. Both wires connecting it to the stereo unit had broken in some teen misadventure or another. [Do they even MAKE speakers with WIRES any more?].

Dad, is there any way this can be fixed?

Sure. Shouldn't be much of a problem.

How much do you think the stereo place will charge to fix it?

Um, yes. Actually I can.

He peered at me suspiciously apparently waiting for the punch line. When none arrived he handed over the speaker. Both wires broken VERY close to the cabinet as you can see in the photo above. Microsurgery time. So I got out the roll of electrical tape [they DO still make this but it isn't easy to find] and a needle nose pliers and I went to work. Oh, and of course as opposed to the era of my High School electronics adventures I now had to get my out glasses too. After a few failed attempts to wind the short stubs of wire together and then a few more failed attempts to get small slices of tape around the twisted wires to bind them the surgery was a success and the patient actually survived to pump out old school rap music for another day.... 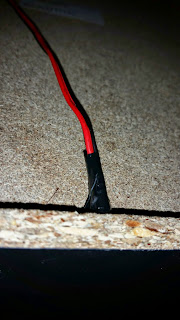 The FRS was very appreciative and if I do say so, somewhat amazed. I felt about a foot taller. See? I can do things. I can also make a perfect martini. Which I am now going to do. Two tangible things accomplished in ONE day. I am climbing out of the fog.
Posted by M.Lane at 9:18 AM 2 comments:

Email ThisBlogThis!Share to TwitterShare to FacebookShare to Pinterest
Labels: Do, Live, Love 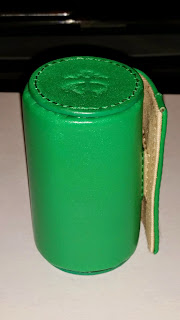 Hello Epics! I am glad to report that my demise was greatly exaggerated. I have been rather swamped with personal and business issues of late and that is the only lame excuse I can make for not posting before now. I have actually been a bit blue of late. An odd sensation for me I will admit. So I decided to pull myself out of it with a few Great Things which I will highlight in my next few posts. The first G.T. is the small leather case shown above. I was wandering about Brooks Brothers in a funk a few weeks ago and it just caught my eye. At a shade over two inches long, they had them in green, yellow, bright blue and red leather, embossed with the BB logo. But the best thing is what is inside... 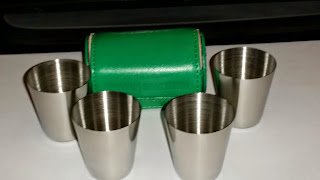 Four perfectly machined stainless steel shot glasses!!!  Has there ever been a more Epic travel accessory?  Just the thing for four pals to have a quick tot before the steeplechase begins.  And just the thing to discover upon my annual declaration that RUM SEASON HAS BEGUN.

First Class.  The only way to fly folks.  There has to be blue sky up there somewhere.  Hang in with me and we will find it together....