Hello to all Epics everywhere with my best wishes for a Merry Christmas and Happy Holidays.

I suppose a lot of you are wondering how this first Christmas of the New Era has been for me and for the Future Rock Star.  The truth is, it was rougher leading up to Christmas Eve and today than I imagined it would be.  The Irish Redhead and I just adored Christmas and our entire family was always swept along in her enthusiasm as was usually the case.  The returning reader may recall my post about driving all the way back to Florida from Wisconsin just so I would not miss our tradition of attending evening services on Christmas Eve.  I had hoped that the heartache of the other special days this year which have come and gone would be cumulative and would in some way insulate my feelings on the greatest day of our spiritual year.  I was wrong.  The week or two leading up to today were filled with special challenges and trepidation, at least for me.

The first thing of course was to resist the temptation to bury my head in the emotional sand and skip Christmas altogether.  As on a roller-coaster [if I were to ever ride one] to close my eyes and just hold on until New Year's Eve brings the turbulent ride which has been 2017 to a merciful close. It would have been pretty easy to opt for that approach.

But Christmas remains.  It is and always will be my favorite holiday of the year. And, despite the cool exterior obtained over twenty years of life, the Future Rock Star loves it too.  So I decided to put up our tree, and decorate the house.  A bit.  I admit that I did not have it in me to get out all of my wife's favorite decorations for the tree.  I'm not sure that I will ever use them again.  But Christmas remains.  I bought gifts, wrapped them [horridly, I admit] and did my best.

Part of the problem is that I so vividly recall what we were doing a year ago.  The IR was discharged from the hospital on Christmas Eve after an awful three week admission.  After getting her home and properly installed in our bed for some real rest, I faced the daunting task of trying to get a particular time-released pain medication that, even with her very high pain threshold, she absolutely had to have to stay out of the hospital for Christmas.  For all the charms of small city living, access to medication the evening before Christmas is not one of them.  I drove to every pharmacy in our county that was open without success.  Then, on a tip from a benevolent pharmacist, I drove to the adjoining county where, at midnight, I got the medicine.  Amazingly, we had a very fine Christmas with gifts, a great dinner prepared by me and the Future Rock Star, the works.  The Irish Redhead was in her full Christmas mode, delighting in every moment.  The spirit continued unabated [with usual post-hospital recuperation time each day of course] through New Year's Day.  Three weeks later, she was gone.  Along with half my cell structure as I have previously mentioned.

Santa can do a lot of things but he can't give you that cell structure back.  Santa can, however, give you the restorative gift of a lovely day.  I am so pleased to report that that is exactly what I have received for the past twenty-four hours.  Yesterday I had a nice breakfast and then went to see a special new friend who's company I have enjoyed on a few recent dates.  I gave her a gift that I bought for her in New York a couple of weeks ago and she was as delighted with it as I had hoped she would be.  I seem at the very least not to have lost my gift for paying attention to the nature of a lady.  We chatted for a couple of hours and had a lovely time.  Then I went to pay my mom a visit at her Assisted Care place as I do every Sunday afternoon.  We had takeout food and gabbed about nothing in particular. After leaving my mom's I was invited over to the home of a pally where I used to perform Christmas standards with him at the piano.  It was a gasser [as Frank would have said] to re-start that tradition.  My singing was not quite up to par but after a couple of cocktails nobody much noticed. Then I went to church for the late service and back home to enjoy a great baked ziti prepared by the Future Rock Star.

By the time we finished eating it was already into the wee small hours of Christmas morning and the FRS said "can I play the eight year old card and open my presents"? I balked initially because I was YAWNING but I eventually gave in.  It is the New Era after all.  All of the presents were his anyhow, and he had specifically asked for most of them in the weeks leading up to Christmas.  That said, there was one gift he requested that was whimsical even by his standards.  An Irish Penny Whistle.  He seems to have developed the notion that he should learn to play pub songs on it.  I am very happy to report two things.  First, that he was just as happy when he unwrapped that whistle as he was by any present I have ever seen him receive on Christmas.  It revealed a boyishness that I haven't seen much from him this year.

Second, I can say that the finest Christmas present I have ever received was the distant sound of random tootling on an Irish whistle from the living room while I drifted off to a very contented sleep around 2:30 this morning.  I know his mother was smiling.

A very happy New Year to each and every one of you!! 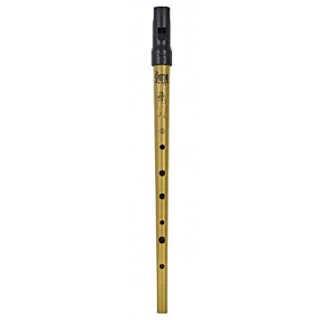