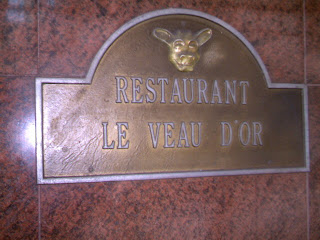 You already know that I am not a science oriented man. I do have a dim memory however of being told once in Junior High School that the essence of the scientific method is the reproduction of results. You have a premise. Test it. Record the result. Test it again. And again. If you get the same result each time under the same conditions, you have proven your theory. Or something like that.

If it works for science experiments it should work for Epic experiments as well. Restaurants, for example. In the pursuit of Epic science, I made a return last week to Le Veau D'Or. New York dining. Circa 1952. The returning Epic reader will recall that I fell head over heels for this small French restaurant at the conclusion of my effort some months ago to revisit restaurants listed in a 1952 issue of Gourmet Magazine. In fact, finding Le Veau D'Or saved the entire effort. I loved my meal that night and was enchanted by the entire experience. Time for rigorous application of the scientific method.

I returned last week for lunch between meetings. There were more diners at noon. The menu replete again with classic French cuisine. As it was raining buckets outside, I opted for the full "cold weather" menu. Onion soup. Cassoulet. Both perfect. Glasses of very nice French Cabernet. Good, strong coffee. And yes, in case you even had a shadow of a doubt, the now-Epic Rum Parfait. The meal was fabulous. One might describe it as Trad. So far, so good. Two very good meals within two months at different times of day. Well fortified, I sallied forth into the blowing rain. There was only one thing left to do.
At precisely the same time the following day I again presented myself at Le Veau D'Or for lunch. Much better weather outside. Again, a decent crowd. And in the interests of science I ordered the same meal. With the exception of Beaujolais nouveau during the (again) lovely meal. And a Calvados or two during and after the Creme Caramel. To smooth the airways for my upcoming flight home. I felt just the same as during my first visit. I did not want to leave. Ever.

The greatness of Le Veau D' Or is established by scientific method. In my business though, we are not bound by such rigors. We can establish facts by circumstantial means. I am actually quite good at it. To this end, I close this addendum with a few random comments I heard from diners during my second lunch last week...

"I come here to sit at the bar, drink Cognac, and ruminate the world away in gracious company..."

"My wife and I were married forty-five years before she passed away. We always came here. I still do. It was our very special place."

"Every year on our anniversary my husband and I come here for a meal. Every year we pray this restaurant will still be here." Leading to the reply of the owner's rather marvelous daughter..."Madame...we have to be here".

Indeed. Dining with the fine folks of Le Veau D'Or is like playing a role in a very good independent film. Come cast yourself in a role as well. You won't be sorry. When the scene starts, I'll be the fellow at the little bar with a glass of Calvados. Ruminating. 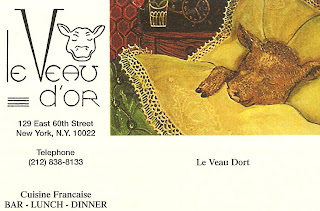 I love the idea of restaurants and bars serving as a setting for a film you're appearing in! Sometimes, it's a very bad movie. Other times it's high cinema. We make lists of the latter, and return to them for the next 45+ years.

I'm quite sad that the widower doesn't have his wife to dine with anymore.

I am very intrigued by your evaluation and post about Le Veau D'Or and am glad to hear that it has managed to maintain its standards over the years. I love your scientific approach your restaurant evaluation. I just heard that Alinea in Chicago is offering a 26 course tasting menu and think a scientific approach of a sample size of more than n=1 may add an additional 10 pounds there. Thank you for my post about cupcakes-all from flickr and none made by me. I modified my post to reflect your optimism in my abilities-thank you.

Ben, check out "Dinner With Andre" where one of my favorite actors, Wallace Shawn, just sits the whole film and does reaction shots while this boor of a friend of his gabs on in a restaurant booth. I love that film!! It was sad about the older gentleman but I guess what struck me about it was that the other folks there and in fact the restaurant itself were so much like family to him. He was having a long conversation with another gentleman at the next table. I have had this same experience there...you find people at adjoining tables talking to you and you with them. IN NEW YORK. Amazing place.

PPPG, I LOVE your scientific theory about the tasting menu!!! You are probably right but don't go throwing formulae or exponents and things at me....BTW, I had a marvelous tasting menu at the Seelbach Hotel in Louisville [the Oak Room] some months ago [pre blog] and it amazed me that they gave you the feel of true Edwardian multi-course dining without the volume of food overwhelming you. The wines overwhelmed me a little bit. It was a marvelous time.

Thanks both of you for your visits and comments!

beautiful writing. I look forward to sitting down and reading through your posts. I love it when a blogger has writing talent, it's like a secret little treasure trove that I get to return to .

BB8, what a nice comment! Thanks so much. I'll work hard to earn your return visits.

Thank you for your kind words and loyal friendship! I will stop by later for longer! ox, Becs