Of Pens and Eagles: The Parker Jotter 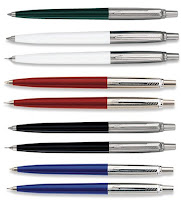 My cul de sac is a masculinity nightmare. Across the street from me lives a guy that can literally do anything. Build anything. Always has the correct tools. You know the guy. Next door to him is a well to do physician of the old school. A fine fellow also. Next to him an old town man with family money from timber baron days. Huge house, brand new. Then my next door neighbor. A Navy fighter pilot and [really] all around great guy. Then me. Itinerant storyteller. Can't fix anything. Can't shoot down anything. Trust me, whenever I walk out my front door it is a TOTAL manhood crisis.

But I have one thing going for me. I have some nice pens. Thanks to the blogger Heavy Tweed Jacket, listed at the right margin, I learned some time ago about the Parker Jotter. A really magnificent retractable ball point. Inexpensive. Classic design. Well made and dependable. Still. It was noted as being the first pen pilots could use in the air. Check out HTJ's piece on the pen and learn the history of this fine writing instrument.

Immediately upon learning of the Jotter via HTJ, I went out in search of them and bought a few. Six to be exact. Three for me. Three for my son the Future Rock Star. He sometimes likes to have things that I have you see. For now. I knew the pens would be a big hit. The FRS has an artist's eye. And a very good sense of classic design. He loved the Jotters immediately. Keeps them in a special place on his desk. So he and I have a pen bond. I have that going for me anyhow. On my cul de sac.

This pen is a marvel. Perfect for these odd economic times. The pleasure you get when you press the button and hear the hefty click that extends the tip puts you in the mood to don a monogrammed starched white shirt. Then head off for a Martini lunch. Timeless. And a tremendous value for the Jotter's low price. The ink flows well from the tip which rotates a little every time you push the button to help prevent blobbing. Goodness knows we need significantly less blobbing. For a couple of bucks, Parker sells a gel refill for the Jotter which makes the writing incredibly smooth. Just the thing for your latest draft of the Great American Novel. Or for doodling during a business meeting. Plus, the Jotter comes in a variety of cool colors. Trust me when I say that this is an Epic implement.

A few months ago, our wonderful neighbor the pilot gave us tickets to a show put on by the Navy Blue Angels flight team. An amazing show all the way around. I took my son and one of his pals. One of the other demonstrations in the show was an Air Force F-15 Eagle. Flying solo. Going this way and that. With almost NO turn radius. Doing an aerial ballet. Of the deadly sort.

A bit later in the afternoon, we spied the Air Force pilot walking alone. Solitary and unrecognized at a Navy show. My son rushed over with a scrap of paper for him to sign and introduced himself. Mildly amused, the young man turned and took the paper...

Which prompted the FRS to reply...

"Yes sir. You're an Eagle driver! And....isn't that a Parker Jotter in your sleeve pocket?"

Amused, the pilot grinned, ruffled the hair of the FRS and signed his paper.

"Yes it is. We all use em. Son, you know a lot about aircraft AND about great pens. Is your daddy an aviator?"

"No sir. But he has pretty good style."


The Eagle driver threw back his head and laughed.

The FRS ran back over to me and gave me a big hug.

Sometimes a small gift of perfect, classic design yields very large rewards. To the recipient. And to the giver. At least that is what I thought later that day. When I returned home. King of my cul de sac. 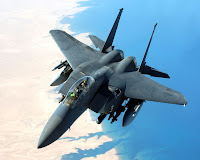 Wonderful. Thank you. Just the small smile I needed this morning.

Brilliant story. I think I'll back up the Future Chief Justice and head out looking for some of those pens today.

This one is a Complete Post. Great humor, turns of phrase, observation, and a story that goes somewhere. So don't give short shrift to the storyteller skill.

That's a wonderful story...your boy sounds like a chip off the old block there. I'm going out in search of The Parker Jotter for my husband, the accountant and son, the almost one-third of a lawyer. Neither of them can fix anything either.

Well done, Mr. Lane, well done. It's grand when father and son are proud of each other - on the same day.

Clinton, I am so proud that your smile came from here!

Turling, Thanks. Goodness knows we are going to need a good CJ.

Ben, I have always thought that with a Norwegian father had my mom not been Irish I wouldn't have any way to make a living!

Belle, your home is like ours! My wife is oft want to say "I have three men here....one is 11 and cant do anything...one is 80 and can fix anything but is blind...one can see fine but can't fix anything."

Tessa, SO true. The thought had not occurred to me.

Thanks, everyone, for your visits and comments! I'll try hard to earn your visits in the future.

I bought a souvenir Parker pen at the Kremlin Cup a few years back and kept up with that pen for ages, as I had never had another like it. Looking at your pictures now, I'm certain it was a Jotter. Now I'll be able to get another. Thanks.

I'd forgotten all about these. My father carried one. It was sort of an aqua blue, I think. Made a great clicking noise -- almost as iconic as the sound that a Zippo makes.

"Can't fix anything. Can't shoot down anything." I love it! I'm with you there. My neighbor has a complete wood shop in his garage, and whenever he sees me cutting something with a wood saw (for example), he moseys on over with his chain saw. Or brings over his snowblower when he sees me plying my shovel. The fact that I'm only sawing a 2" branch or shoveling a hundred square feet is immaterial; his manhood is established.

Melon, you are very welcome! Enjoy!

EE, the "iconic sound" and the zippo analogy are just PERFECT! You are spot on. And they still make the aqua...I have one.

Sartre, my neighbor is always very helpful and always has the correct tool or device for any task. And he will always share. At least its not like after our last BIG hurricane when every CPA was out with a brand new chain saw committing horridly negligent acts of limb separation. Tree limbs, thankfully. Nothing more scary than a herd of CPAs with power saws...

I remember seeing a piece in Soldier of Fortune Magazine in the late 70's about using a ballpoint as a defensive weapon. Can't get more macho than that. A great post, sir. Well told and most touching.

Tintin, thanks! I am going to find a copy of that SOF for future evidence of machismo. I really appreciate the comment and compliment.

Yes, as a teen I discovered the Parker Jotter, and I was born in 1943. I learned penmanship with a nib pen and inkwell in school, so ball points definitely attracted my interest. Most were cheap and unreliable. Then I found the Jotter and a love affair with them was created. I still buy them on ebay. Only one other ball point is allowed to reside in my home, it is the Swedish made Ballograf which actually has a better cartridge than the currents Jotters. Now to modify a cartridge to use in the Jotter body as the Ballograf is not impressive other than it writing quality.

I do prefer the all stainless varieties favoring the Flighter design in the pencils.

Thanks again for your article, I have introduced many people to the Parker Jotter over the years.

Nice post!!Thanks for sharing these beautiful pictures with us.
Pens with logo printed