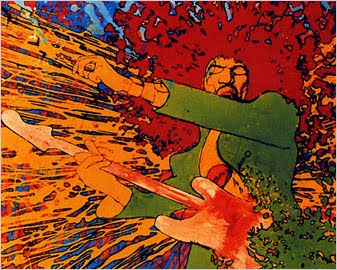 When you are attempting to father a child with seemingly unlimited artistic ability, a tension may arise. Between encouraging the natural flow of his enthusiasms on the one hand and what I call "socio-economic correctness" on the other. Meaning, what others of my social set (such as it is) feel the "proper" direction for their (our) children is in life. The "socio-economically correct" view allows of only about a half dozen career options. Continually amazed, my wife and I go out of our way to encourage the Future Rock Star's artistic bent, probably because neither of us has ever really known an artist before. Much less loved one more than oxygen.

Still, the tension is ever-present. Certain beloved and wildly successful persons close to me have made it clear that playing music or painting are what you do for recreation, not for an occupation. Seen in this light, the classic Fender Stratocaster guitar we gave the FRS a few years ago was, in the minds of some, the equivalent of handing him a heroin kit for his birthday.

Three years ago, when the FRS was nine, I was handling carpool with him and a small pal in the back seat of the car. The following exchange occurred...

Well. One point for the home team. I continued driving down the road. A huge grin on my face.

Inspirational Note: Thanks to Toad for his thought provoking post of 1/16. ML
Posted by M.Lane at 1:44 AM

A few years ago a friend crushed his art loving son, with the comment "thats craft, not art". I'm uncertain his son ever recovered.

Bring on the Fender, any day.

What a fabulous father you are! The biggest result of your parenting will be a son who is happy and appreciative of his dad forever. And maybe a rock star on tour someday with dad along for the fun. :-)

Toad, I agree. Preventing the crushing while maintaining civility and a modicum of order is our great parental challenge is seems...

Preppy, thank you! I don't write about my monumental gaffs though so you need to keep that in mind. And, the FRS has one amazing mom. As for me going along on tour...the mind boggles.

Just make sure he knows who the Three Stooges are. Oh yeah, and Rod Serling. Well rounded kid, that'll be.

Amazing. My ex told me until I sold something I wrote it was a hobby. I was 33 years old and it still pisses me off.

Tintin, I hear you.