Man Of The Hour 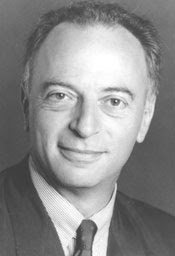 This man saved my Irish Redhead's life today. And, along the way, he cured a condition that has menaced her for twenty years. When we first met him a few weeks ago, he spent over two hours just talking to us. About the issue. About this and that. He posited certain theories. All of which came true. This morning, early, before the day long surgery, his entire team came up and introduced themselves. Described what role they were to play in the day's events. One even kissed her hand. That, friends, is the result of real leadership. Of true professionalism. Of a commitment to excellence. Of giving more than a damn.

His name is Andreas Tzakis. They say he is the best in the world. He doesn't speak of such things. Afterward, I wanted to buy him a martini. At least. He didn't have time. He was off to help someone else.

As I mentioned, they say he is the best in the world. You will never hear any quarrel with that notion from this corner.
Posted by M.Lane at 5:09 PM

Profoundly sad to know that your IR faced surgery today and ecstatic to know she is better. Keep us posted.
Sincerely,
Tom

Sounds like great news! That and a Packers victory would make a good week.

I'm sorry to hear your wife has had to have surgery- I hope she makes a speedy recovery from what ails her. (Sounds positive so I'm hoping all is well!)

I bow to you, the IR, and the physicians for what you've all been through together. I am overjoyed for you and touched by everything you wrote, all best to you both.

I am so happy for your news~! Drinking a Hendricks martini in his--and the Irish Redhead's--honor.

Thanks everyone for your kind thoughts. This has been a heck of a month.

Glad to read the good news. We practitioners of one sort or another should all earn such praise through our professionalism, dedication, personal attention, and skill. Again I wish your family continued health.

Wishing you and yours the very best and happy to hear of such a positive outcome! You're both in my thoughts and prayers. Y'know... for good measure.

You and your family are in my thoughts - sad to hear about the surgery but thrilled about the positivity that comes through on this post. Here's to a heck of a great 2011!

The best to her and to you and to a better life. Stay off the beach.

Thank you so much, everyone. The IR is doing very well, although still in hospital. Dr. T. sees her every day. He seems VERY pleased. The Packers won. And I have managed to stay off of the beach. Thank goodness. There is only so much pale Norwegian/Irish skin the sub-tropical world can handle.

MLane, so sorry to hear of the need to seek the services of someone who is 'the best in the world' at anything--seems that would seldom be a good thing. Heartiest wishes for a rapid and complete recovery for the IR. Hang in there, bud--I am, as always, humbled by the eloquence and simplicity of your prose and the sentiment behind it.
Skoal!