An Epic "Invention": The Rusty Bob 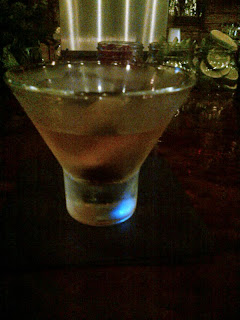 I woke up yesterday morning to an almost Autumnal day here in the sub-tropics.  Which set a fellow's mind to thoughts of  Scotch.  And of Scotch-based cocktails.  And of the finest Scotch-based cocktail, the Bobby Burns.  Harry Craddock in the iconic Savoy Cocktail Book calls the Bobby Burns "one of the very best" Scotch cocktails and lists the recipe as the classic equal parts Italian Vermouth and Scotch with three dashes of Benedictine.  The latter ingredient converts the august Rob Roy into the sublime Bobby Burns.

More recent recipes for the Bobby Burns basically make a Scotch based Manhattan, including a dash or two of Angostura Bitters, and add Benedictine.  Also a good drink.

Walking along to my favorite watering hole, I considered other Scotch based cocktails.  Rob Roy, Bobby Burns, Rusty Nail...and then I had an epiphany.  Why not substitute Drambuie for the Benedictine in a Bobby Burns and create a new cocktail?  What to call it? A Rusty Roy? A Rusty Bobby? No. The Rusty Bob!!!  A perfect play on the Rusty Nail/Drambuie connection.

I stormed into the bar just at opening time and announced my creation.  The first run at it was a bit too sweet.  The regular bitters could not hold up to the sweetness of the Drambuie.  The great and lovely mixologist Melissa then suggested using three drops of Boston Bitters.  This made the drink superb.  Apparently this Boston Bitters is nothing to be trifled with since it comes in a distinctly apothecary looking bottle with its own eye dropper built in.

A triumph! My first cocktail invention! I announced it to one and all and actually got a few other imbibers to try it, all with positive reports.

But I believe it was Saint Augustine who said that humility is good for our souls.  In an abundance of caution, I searched for Bobby Burns recipes this morning and discovered a variation of the Bobby Burns using Drambuie instead of Benedictine discussed on the superb blog The Cocktail Chronicles.  In 2005.

It seems that everything old is indeed new again.  At least I came up with a dandy name for the drink.  And I upped my humility quotient.  The mixology game is a tough one.  Back to the drawing board.

Genius. I will have to give this a try. Funny, when we were imbibing last weekend at the MSB, I wanted a Drambuie, but they did not have any. Great seeing you last weekend. Enjoyed it.

Congratulations Mr. Lane! It must be satisfying to confect a concoction! But my favorite part of this entry is where you announce that you "stormed into the bar just at opening time." I admire your punctuality and dedication.

And GTH I must say that, if one is at a bar and it is lacking in anything, you must leave and never return.

Ben I thought you would appreciate that. I agree with your position on bars that lack but in the event you have to take into account the available choices. Which were none.