New York, Part One: A Perfect Field of Snow 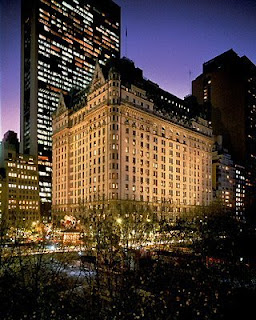 Walking past the Plaza Hotel late last evening, I stopped by the fountain. I always do. About thirty feet north of it is a spot where I had one of the happiest moments of my life.

My son, the Future Rock Star, was eight. A Florida boy who had never seen snow until that trip. A blizzard of sorts the day before blanketed Manhattan, providing the perfect opportunity for Epic play while mom was shopping. FRS discovered a little plot of ground near the Plaza fountain under six inches of new snow. A flower bed in summer. He thought he had all the snow in the world. A hectic snowball fight broke out.

One of the things I adore about New York is that you can have a snowball fight in a public place and nobody seems to mind. Nobody even demanded that we procure a permit. The only miscue occurred when the FRS overshot his favorite target (my head), pelting the backside of a Fifth Avenue Doyenne who was strolling by. I gave FRS the fatherly death-ray look and turned to beg the pardon of the 5AD. Who wheeled about. Snatched up the errant projectile. And pelted the FRS right back. Smiling, she said she had not thrown a snowball in thirty years. Went on her way. She had a good arm too for being seventy if she was a day. My kind of lady.

We eventually used up our patch of snow by the fountain and moved across 59th street just over the Central Park fence where an entire field of similarly untouched snow provided ample opportunity for more warfare, snowman building and snow angel flopping. Not another person entered that field all day. Sustained by regular trips to one of the ubiquitous hot dog carts, we spent a sparkling, cloudless day until FRS's lips turned a tad blue and he demanded an immediate hot bath. I carried him back to the hotel. He was almost too big for me. Two months of growing later the carrying days were over.

All of this played through my mind last night as I stood by the small flower bed before the Plaza. Thousands of people pass by it every day and take no notice. But I won't be one of them. You see, that little spot is Epic ground.
Posted by M.Lane at 10:03 AM

What a lovely memory! I love how the lady stopped and fired a snowball right back! I thought FRS was younger. My Boy who is not a baby is eight, what a fun age! Best, Becs

a beautiful reminder to take note of these moments, as they so easily get lost in the hectic day-to-day of raising kids.

on another note, I may be able to check out Bar One soon . . . report to follow!

What a terrific story and a sweet memory!

People who criticize it don't realize that Fathers carrying Too-Big-Sons is all about the Father trying to hold on to something that's fast slipping away, and he will do it as long as he's (1) physically able and (2) allowed to do so by the Too-Big-Son.