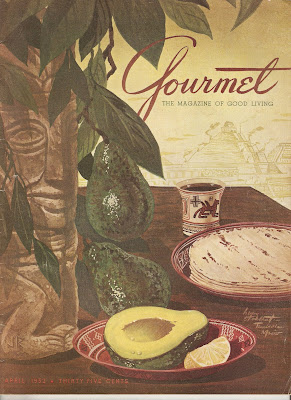 After a very hectic work schedule, the final free moments during my recent trip to New York were devoted to a scavenger hunt. Self imposed. Gustatorial. Solo, typically. A scavenger hunt for past spots of dining glory. Good times. High living. Cabs rolling up to the front door of little Manhattan restaurants and discharging swell couples dressed for an evening out on THE town. No concerns about cholesterol. Or sodium. Or saturated fats. Looking forward to casting off the workaday week and getting just a wee bit hammered in the same place together. Following Sinatra's dictum of two martinis before dinner, no more. And no less. A scavenger hunt for Gourmet Magazine dining. Circa April 1952.

A treasure trove had come into my hands you see. An antique dealer friend of my wife's had given her several vintage issues of Gourmet like the one pictured here. I love magazines from the 1950s and 1960s. Especially ones devoted to what then was really considered the art of living. An art I considered pretty much dead. Buried under the crushing social weight of the period 1975-1995. Exemplified by the content of this issue from seven years before my birth.
Take the idea of the back yard grill party. How would you like to be invited to one like this: 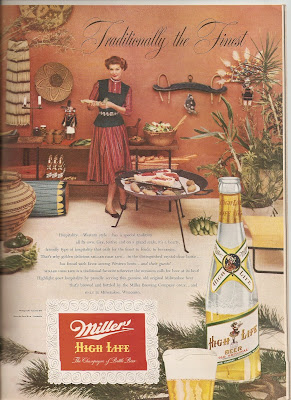 Look at the size of those steaks! They even had better beef in 1952...
How about an after dinner cordial... 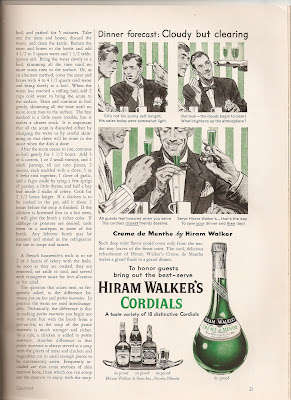 This ad text is classic: 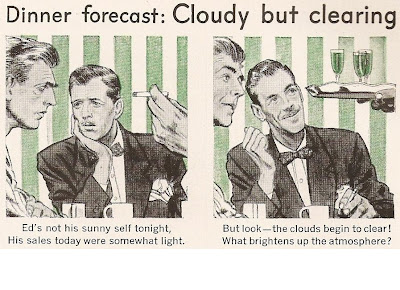 I've cleared up the clouds of a few business days myself in just the same manner. So I knew I was onto something. My favorite part of any issue of Gourmet is the part at the back where there are little ads for restaurants. The page in 1952 looked like this: 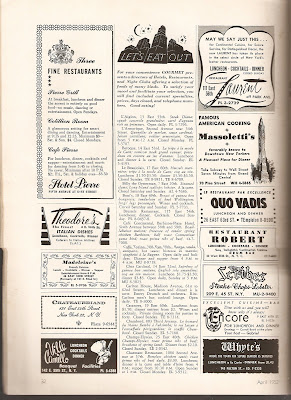 The heading exhorts all fans of great dining 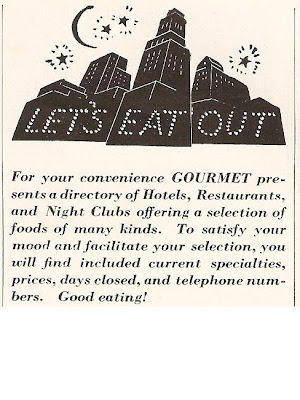 Inspired, I thought it would be interesting to pick a couple of the restaurants listed in the April 1952 version of "Let's Eat Out" and see if they were still around. If so, to dine. 1952 style. Thus, the scavenger hunt.

Waverly Root held that there were only three great cuisines. French. Italian. Chinese. As open to debate as this may be, he knew a hell of a lot more than I do. I adopted this paradigm for my hunt. Villa Camillo was noted as a wonder of classical Italian cuisine in 1952. Now it is... 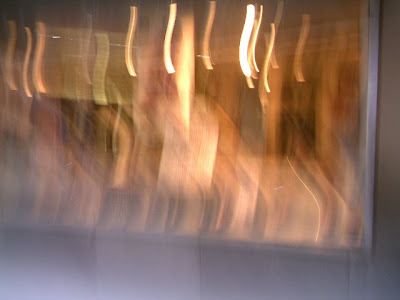 A shoe store. Or, what would look like a shoe store if your Epic could work a darn camera. Trust me, a shoe store. Not a temple of gastronomy. Giovanni in 1952 was hailed as about as close to Italy as one could come. Diners lined the sidewalk waiting for a table. I was in a state of high gustatory anticipation but... 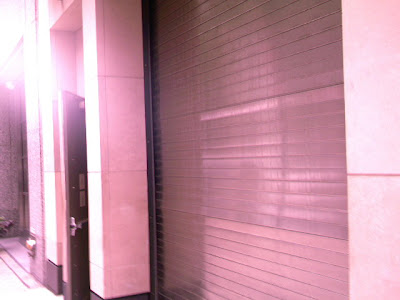 Who needs great Italian dining? We have to have more DELIVERY access. Getting hungry now, I moved to another hemisphere and to the realm of Chinese delicacies. The restaurant HoHo listed two features (beside the rather alluring name) that drew me like a moth to a porch light. Cocktails until FIVE in the morning. Classic Mandarin cuisine. I don't even want to tell you what is there now. Suffice to say, if you need a self-destructing suitcase or a really good looking but nonfunctional electronic camera it is the place for you. They don't even have a bar.
Desperate now, I turned to the French to save me. The Coq Rouge was a noted place where many high livers used to start the evening. Or end the outside-the-hotel portion of the evening. I could almost taste the escargot until... 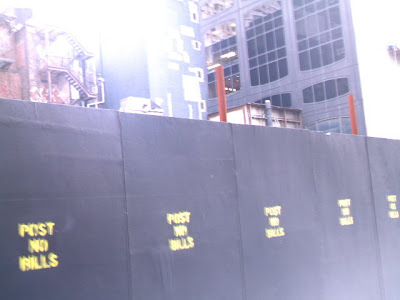 Of course we need another high rise in midtown. Scurrying to Chateaubriand's former location near Park Avenue...a car dealer. A VERY nice car dealer. But still....
In a state of almost total collapse, close to looking for a hot dog cart, I remembered my final French place from Gourmet, 1952. Way down at the lower left segment of one of the Let's Eat Out pages: 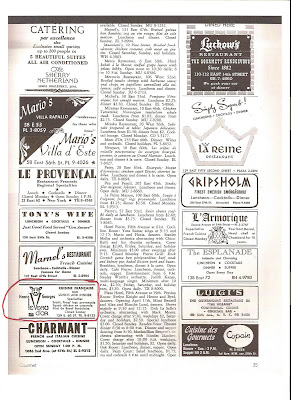 Le Veau d'Or. Sixtieth Street. 1952. It wasn't fortuitous that LVD was my ace in the hole. The great blogger Tintin (The Trad, listed at the right margin) had done a piece on this restaurant some months back. I could not believe that it could still be in business. In the same location. As amply demonstrated above, this is New York. Not New Orleans. In the Big Easy, great places like Antoines and Arnauds have been in the same spot for generations. New York of course is another story. Or so I assumed. I ambled wearily down 6oth and to my delight saw 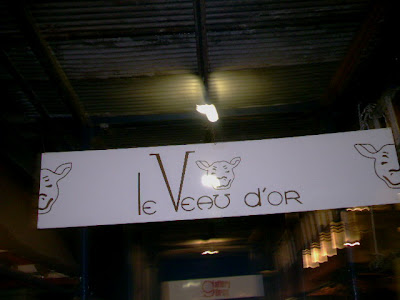 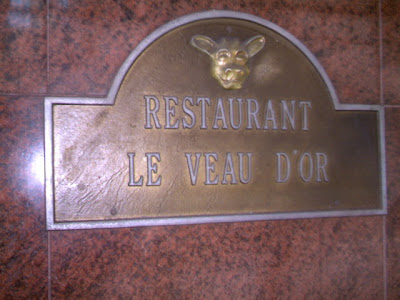 Right where it was supposed to be. The exact spot. I was getting a very, very good vibe.
To digress, my past experience with trying to locate classic 1950s high dining (outside of New Orleans) has not been spotless. I found a Chicago joint one time that had been well known back in the day. A place my Dad used to frequent. Right downtown. The fellow even had a second location. In another country. I found the place. Right where it had always been. I was glad that my Dad was not there. And that I had backup plans for dinner. Indescribably horrid. Visualize PETS. Lots of them. You need to know no more. I ran from the place. Right to a disinfectant vendor.
My meal at LVD could not have been more different or more pleasant. Visualize a small rectangular walk down space. Perfect little bar on the left. Minute coat check on the right. Eclectic art on the walls. The owner sitting in black tie reading at one banquette. A young couple very close together in a corner booth. A French lady on the stereo singing love songs the way only French ladies can sing them. Probably not Carla Bruni but who was I to ask for perfection? One waiter, Marcel, who was a good bit older than me. Who took my coat, made my martini (perfectly) and then took my order. The wine list is nice and very reasonably priced. The Saucisson Chaud appetizer was perfect. As was the special of the day, Boeuf Bourguignon. And the Bordeaux I had with it. I made friends with a nice couple at the next table who dine there a lot. When I ordered Rhum Parfait for dessert they told me not to. Not because it wasn't very good, you see. But because...... I plunged ahead.
The "parfait" was a little silver bud vase with coffee ice cream in it. A small amount. With a hole drilled in the center of it (making the actual volume of ice cream even less....a VERY small amount if any of my medical team is reading this). As I peered at the hole in my dessert, Marcel appeared with a bottle of white rum in one hand and a bottle of dark rum in his left hand. He plunked them down on the table next to my coffee and said I could pour one, or both, into the hole if I so desired.
My readers should know what happened next. Rum went into the parfait. And just a touch in the coffee also. Because balance in all things is very important to the maintenance of harmony. Which I would have considered essential had I not been occupied at the time by peering about the room, CONVINCED that Carla Bruni was in there somewhere. Alas. The parfait turned into something of a silver encased rum shooter. Which was fine too. When Marcel offered me an Armagnac, I could hardly refuse. My new friends watched on from the next table in mild amusement. A party of ten came in. After close inspection from a distance (as best my somewhat cloudy vision would allow at that point) I am pretty sure that Carla Bruni was not with them either.
I really did not want to leave this place. Even without the impact of the drinks. I would have finished dinner and then started all over again. But, no. Eventually the thought of an early flight the next morning impelled me past the perfect little bar and out onto 60th street. Perfectly delighted. I made plans for dinner there on my next trip with my new friends from the next table. I think Carla Bruni was following me as I strolled happily back to my rooms. I glanced at a newspaper stand en route. It could have been my eyes playing tricks on me. Or the effect of the parfait. But I swear the date on the magazine that caught my eye was April, 1952.
The New York Times once said that Le Veau d'Or continues to exist without any apparent reason. Ridiculous. Go. Dine. You'll know the reason. 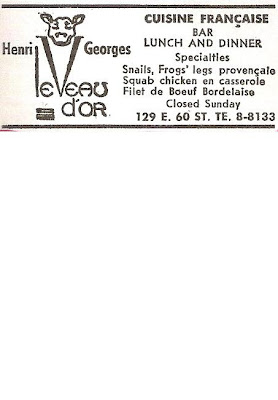 This is a great adventure. I'm glad all ended well, with plenty of rum (and maybe even Carla Bruni). Next time, how about scoping an old New Yorker for jazz dives and seeing what's what?

CL that is a GREAT idea! [you STILL have my award for best blog-name]

MOR, thanks for the visit! I'll try hard to earn them in the future.