A Look Behind The Curtain 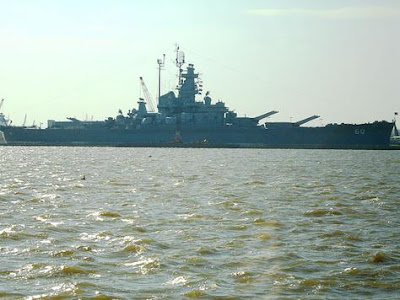 I find it amusing that we never think our parents had any life at all before US. There must be a cosmic reason for this. Probably something to do with the need for a curtain. To preclude view of miscellaneous conduct and events that occurred while we were growing up. Which we have presumably done prior to becoming parents.

A few weeks back, during the apogee of my son's summer holidays we visited a battleship park together. A long, sweltering day spent climbing all over a gigantic war machine. Fascinating and perfect. You should have seen my photo of the room in which the officers took their meals. And my photo of the silver service. You WOULD have seen these photos had I not been the one attempting to take them.

In any event, we finally melted and straggled back to the park snack shop. Where I watched the Future Rock Star consume multiple hamburgers as I merely attempted to rehydrate. We were having a marvelous discussion of the caliber of the guns on board, the compliment of men, the battles she had fought. I do not know why, but I chose that moment to brush the curtain aside just the smallest bit.

ML: I'm going to tell you something that nobody knows.
FRS: [Slowing, but not abating, his burger consumption, eyeing me in a sort of fishy way] Ok...
ML: For a time, when I was your age, I was absolutely convinced that I would command a warship like that one day. That was what I wanted to do more than anything in the world...
FRS: [Freezing in mid-nosh] No kidding? REALLY?
ML: Yes. Absolutely.
FRS: What happened?
ML: Oh, I don't know. I just decided I wanted to do other things.
FRS: [Staring at me as if seeing me for the first time, then refocusing on hamburger 3] That's cool, Dad.

But I do know what happened. My parents announced an unprecidented event. The only vacation we ever took during the summer months. During which we found ourselves in Annapolis, Maryland at the United States Naval Academy. Where I learned that there were no more battleships in active service. And where I was able to observe the new freshman class ("plebes" in Academy parlance) partaking of their summer "orientation" activities. Which seemed to involve a lot of scrubbing huge items with tooth brushes. I learned something very important. That I knew myself just well enough to understand that my inordinate love of Navy officer's uniforms, particularly the Dinner Dress Whites, was not enough to carry me successfully through four years at Annapolis.

So it was, then, that my tour of duty on board a United States Navy battleship consisted of six hours, if you include the time at the snack shop. But the look of amazement on my twelve year old's face when he learned of his father's boyhood seafaring dreams was worth more than all the exotic ports I had imagined I would visit. And, now, the FRS realizes that there are things back there in my past that he does not know. That he may never know. As it should be.

Yet, every so often, I see the Dinner Dress Whites. And I feel that salt air on my face... 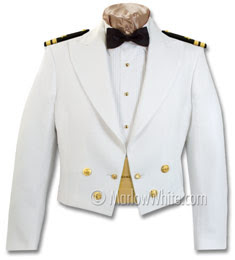 What a lovely story. I recently read a screenplay that my father wrote when I was growing up. He wrote it for fun- I remember him driving to Los Angeles to attend his writing class and wondering what it was he was working on. Reading it was a really cool experience- a side of him I had never seen before!

It's funny it took him so long to give it to me to read. He probably experienced the same thing you did with your son (although me being far older than twelve I gave him more than a fleeting glance of recognition :)

DC, how interesting THAT would be! What a great look into your father's life. I wonder how FRS will react when he learns that I write a blog?

Loved this post. My Dear Old Dad went to Anapolis. Somehow he entered that august institution without a proper eye test. Upon graduation it was determined that he could not serve as a line officer because of color-blindness. He promptly switched to the 101st Airborne.

Mrs. Scoffs, after all that to end up in the Army. But a great unit.

My father would never talk about his time in the army. He joined right at the onset of Vietnam and was stationed in northern Japan copying Russian code. And, he was drunk a lot. Those are the two things in all our years I was able to get out of him. Even for a biography of him and my mother I was assigned to write as part of a high school English class could not persuade him to divulge more. His answer was always the same, it's really boring. Perhaps, it was boring and there is nothing to talk about. Or, perhaps, my father was the American version of 007!!! I'm going with the former, though. Throw in the curtain and it starts to make more sense.

Turling, I've met a few vets like that. My experience has been that WWII vets want to tell you all sorts of stories and Viet Nam vets don't.

My wife has a half brother who was a helicopter door gunner in VN. I recall reading that this was the highest mortality job in that war. He will not speak of it. Not a word. He stays up late at night and writes poetry sometimes.

As usual a beautiful snippet of you and your son. Wonder what I will divulge to mine in a few years.

From my formative years, one of my favorite books is "A Sense of Honor" by former Secty of Navy under Reagan and current senator, Jim Webb (D-Va), about a year at Annapolis.

Ben, thanks! I have not read Webb's book, but I'll have to look into it. I love all Navy literature!!

Good story. As my hop-and-pop Recon Marine (ret.) brother-in-law and ex-UDT father-in-law attest: "Naval Academy, great place to be from. Not so great to actually be there..." Always makes me laugh.

(Brother-in-law couldn't go SEAL or line because of colour-blindness. It was the Marine Corps' gain.)

My kids are still too young to wrap their heads around the concept that their grandmother is related to me in any way.

Easy, I am still laughing about your mother and your kids!! Thanks for the comment!