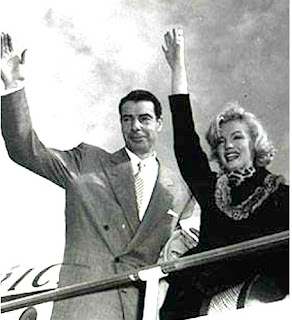 The most famous couple ever. DiMaggio and Monroe. On their wedding day, 1954. Headed off to a honeymoon in the Orient. During which an American general asked if she would visit the troops in Korea. Joe said it was her honeymoon, she could do what she wanted.

MM: It was so wonderful Joe! You never heard such cheering!
JD: Yes, I have.

That pretty much set the tone, I suppose. Still, when she died, he left word for flowers to be put on her grave "forever". Celebrity love. At its most sad.

It is my twenty-second wedding anniversary. I'm so glad that we found each other. And that we know, respect and love each other so well. Cheers to us. To all of you. And to all of your loves.

Quote from "The Silent Season of a Hero" by Gay Talese, Esquire, July 1966".
My earlier post about my 21st Anniversary is here.
Posted by M.Lane at 1:11 AM

Just celebrated my 3 year anniversary in May. It's a beautiful thing!

Twenty-two years... congratulations! And a very happy anniversary. My husband and I completed seven recently, so we have a fair ways to go before we hit the 20s. But I do understand your sentiments quite well. Cheers to you and your wife.

The DiMaggio and Monroe story is really very sad. Those two lines say so much about their dynamic.

A toast tonight to Mr. Lane and his Gorgeous Irish Redhead! Huzzah!

Happy Anniversary to you and your wife!!!

Thanks everyone! We went to the sea shore for the weekend and had a wonderful, lazy time.

Happy Anniversary, Epic! Why don't you bring your wife to one of your Chicago trips sometime? My husband and I have never been to Charlie Trotters; perhaps we should go together!?

Cashmere, that is a fine idea! I'll let you know...

Hey! Happiest of anniversaries. Cue up "At Last" or "It Had to Be You" and take a spin around the dining table for me.

E&E, thanks! At Last is my second favorite song...